They’ve seen the hype, heard it, read about it. Coach Pat Fitzgerald has laid it out, a caution against complacency.

“We’ve all seen it,” said Christian Jones of the considerable expectations being heaped upon Northwestern’s receiving corps in the lead-up to the upcoming college football season. “The coaches showed it to us. But we don’t want to rely on all that. We want to create our own expectations and exceed those. Once we do that, we feel like we can overachieve the expectations being given to us.”

The high praise isn’t lost on the Wildcats wideouts. They understand the challenges in meeting those expectations—injuries, poor quarterback play, good defenses, bad weather—and truly believe themselves capable of meeting those challenges. Yet unlike most star-studded receiving corps, which more often than not are highlighted by an unrivaled bona fide No. 1, or at least a pair of exalted stars, this group is as well-rounded as any receiving corps in the Big Ten, having yet to produce a clear-cut go-to target at this early stage of training camp.

“We’re really deep and it’s special because everyone has their own person to compete against and that helps elevate everybody else’s game,” Jones said.

Depth will be the calling card for this receiving corps. Top to bottom, the Wildcats boast arguably the league’s deepest and most well-rounded group—ESPN’s Big Ten Blog recently ranked NU No. 1 in its “WR/TE” B1G position rankings . Jones, a 6-3, 225 pound deep threat, is one of the main reasons why. As a true freshman last season, he reeled in 16 passes for 195 yards, including a 39-yard bomb against Michigan. After getting his feet wet last season, Jones is primed for a breakout season. With less than a week of training camp in the books, he already notices a huge difference in his comfort level from last season.

“I already know what’s coming,” he said. “I know all the plays that are going to be called and all the concepts and everything. All I have to do is get used to the speed and once I do that I’ll be fine.”

Playing as a true freshman will no doubt help Jones take on a larger role in the offense this season. Cameron Dickerson chose a more conventional path. A redshirt year allowed him to settle into a new lifestyle, team and working environment, to find his bearings within coordinator’s Mick McCall’s complex playbook. This spring, it was hard to argue against the results. Dickerson opened more than a few eyes with his highlight-reel catch in the spring scrimmage, a 40-yard pitch and catch from back up quarterback Trevor Siemian in which Dickerson vaulted himself over cornerback Nick VanHoose, contorted his 6-3, 200 pound frame mid-jump, then landed on one leg and lost his right cleat while fighting his way into the end zone. It was a fitting culmination to an altogether successful spring practice slate. 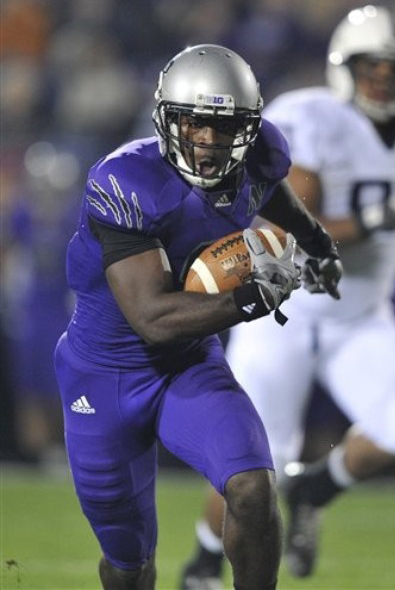 Now Dickerson is ready to make an impact in games that, you know, count. Or at least that’s the impression quarterback Kain Colter has after watching Dickerson’s rapid progression.

“One guy that just sticks out in my mind is Cam,” Colter said. “He is a guy who can go up on a nine route and catch the ball; good fade receiver.”

Having two long and athletic deep threats, Jones and Dickerson, will provide Colter with big targets to hit for longer plays requiring lengthier route patterns. So when the Wildcats got word less than two weeks ago that USC transfer Kyle Prater would be eligible to play this season, it was an added bonus for an already well-stocked batch of downfield specialists. While he struggled with the Trojans and has yet to play a down of Big Ten football, Prater’s talent is undeniable, and he should make an impact this season.

With three years of eligibility to play out at NU, Prater has a decent-sized window to regain the luster from his high school days, when he was the No. 2-ranked receiver in the class of 2010, according to Scout.Com. This summer, Prater worked out with Colter, a mutually beneficial bonding process that enabled the development of a comfort level between quarterback and receiver, the lifeblood of any successful passing connection. From a talent perspective, there is no one on NU’s roster that comes close to matching Prater. Yet in his first season on campus, it’s unclear where he stands in an overcrowded receiver depth chart. One sign of encouragement involves his familiarity with the offense, a learning process that’s at a far more advanced stage than in the spring.

The Wildcats’ spread attack relies on short passes, the sort of dink-and-dunk completions that over time wear out defenses, physically and mentally, in the way they methodically advance an offense and deliberately infuriate the opposition. NU has the receivers to work this short passing game—namely, Tony Jones and Pierre Youngblood-Ary. Both have made significant strides this offseason and appear ready to contribute this season. Jones was one of just five true freshmen who played in 2010. He redshirted in 2011 after suffering a knee injury in advance of the season opener at Boston College. One of the all-around fastest players on NU’s roster, Jones can lineup in a variety of spots, from slot receiver to the outside, and anywhere in between. Following an impressive performance in spring practice, it’d be quite the surprise if Jones isn’t starting week 1.

“TJ is just TJ,” said Christian Jones. “TJ is going out there and making plays and doing what he can to help the teem win and I feel like he’ll be special.”

Much of the dialogue about this receiving corps focuses on the youthful talent. The two greybeards of the group—Demetrius Fields and Rashad Lawrence—aren’t ready to relinquish their roles in the offense. They are the two leading returning receivers (not including Colter) and both should maintain a vital role in the offense.

However it plays out, having an overabundance of receivers is an entirely favorable problem to have. With so many players competing for playing time, preseason competition will be fierce. The group ultimately may not meet its lofty expectations, but Colter—the man responsible for delivering the ball to this versatile group—is downright thrilled with the wealth of options he’ll have on every dropback, rollout and bootleg-designed pass play.

Coming from a quarterback, that sort of ringing endorsement could be dismissed as pure mediaspeak. But Colter has good reason to feel so giddy about his receivers this season, even if they can’t live up to the hype.