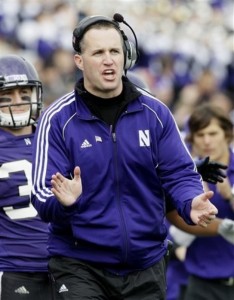 Things were different in the college recruiting sphere back when Pat Fitzgerald was committing to play football for Northwestern in 1992. A lot different.

“I got offered a scholarship my senior year, in December, sitting in Coach Barnett’s office,” Fitzgerald said. “That system was pretty good.”

The new “system,” isn’t as clearly defined, as some kids are offered scholarships as eighth graders and some don’t receive offers until after they graduate from high school. However, the general trend in college football is high school players shifting toward earlier commitments — much earlier than in Fitzgerald’s time as a player — and that is evident in this year’s NU recruiting class.

Right now, the Wildcats have 16 commits for the class of 2013, a class that still has a whole year of high school football left to play. And judging by the way things are going, the class could fill up before the high school season’s halfway point.

That’s a drastic change from Fitzgerald’s era and even substantially different than when this year’s seniors were committing to play for NU.

“I think it used to go from maybe during the season, during the person’s senior year, to in the summer, to now it’s in the spring to maybe sometime during their junior year, or in the winter,” NU recruiting coordinator Matt MacPherson said. “So it’s been, over the years, a gradual change.”

“For us the last couple years, we’ve been almost finished by the time we’ve gotten to the season,” he said. “So now there’s usually a couple here or there, but for the most part the process has accelerated.” 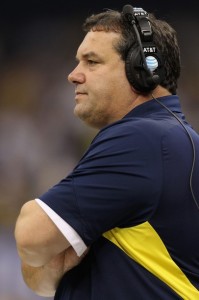 For other schools, even in the Big Ten, the recruiting process has shifted even earlier. Michigan already has 23 commitments for this class and had 17 before NU’s first commitment from this class. With commitments continuing to come earlier and earlier, Fitzgerald is worried about the “slippery slope” recruiting is headed down.

“I can’t tell you that I’m a real big fan of it,” he said. “I tough of the young men that we’re starting to recruit right now, they don’t even have a driver’s license yet, so there are a lot of choices once you get that freedom.”

Some schools have even begun offering eighth graders, and while NU will continue to try to keep pace in the recruiting race, it won’t go to those extremes when offering players.

“I need to be able to see you play varsity on tape,” Fitzgerald said. “Otherwise it’s just smoke and mirrors in recruiting innuendo. We’ve had a couple young men that have come to our grade school camp that have been men amongst boys and then all of the sudden (their voice changes) and their whole body changes. This isn’t basketball; this is football. This is a violent sport played in space by a lot of players.”

While there seems to be a sense of urgency for coaches to be the first or one of the first to get in on a player’s recruitment, Fitzgerald said it is important for him and his staff to complete a thorough evaluation before offering a player.

“Ideally, if I’m going to offer a sophomore or rising junior, obviously I want to see them on video playing on varsity, and obviously it’s an area in spring practice, we evaluate them in spring practice with our own eyes, or just (have them) come to our camp in the summer,” he said. “If we haven’t done that, I’m going to tell the young man and his family that we know ABC and XYZ university, but I’m going to tell you this right now, when I can watch two or three of your games on the varsity as a junior, then we’ll make our evaluation.”

That approach could cause NU to lose out on some players, but even so, Fitzgerald sticks with his method.

“If that means we’re out then I wish you well, but if you want to get the best degree in college football, then I think it’s worth you being a little bit patient here for a couple months,” he said. “They’re not signing a scholarship for like two years, so give me a break.” 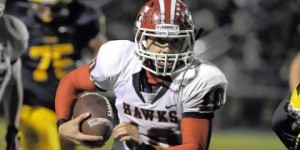 There are positives to the new recruiting trend — as MacPherson pointed out, it’s “nice during the season to know that your recruiting class is set.” But as with most things, there are also considerable drawbacks. In this situation, it’s the rising number of decommitments that have gone along with early commitments and players rushing into their decisions.

While there have been highly publicized decommitment sagas around the country — five-star quarterback Gunner Kiel’s Indiana to LSU to Notre Dame circus, for one — NU has been able to avoid the spotlight in that regard.

“Either you’re a really good fit and it works out, or you’re not and that’s okay,” Fitzgerald said. “So when a kid commits to us we kind of set a standard and an expectation and we typically don’t have a lot of decommitments. I’m not looking for a guy who is a soft commitment or something like that. I’m not a soft kind of guy, so either you’re all in or you’re all out and if you can’t commit to being all in, then I recommend to recruits and their parents that they keep going through the process.”

For Fitzgerald, the recruiting process is like getting married, and like marriage he hopes players honor their commitments.

“If you tell me you want to go date some other girl, some other schools, I can promise you our wedding is off and I’m not going to continue to recruit them,” he said. “We’re just not going to do that.”

In order to make sure players honor their commitment and are comfortable with the program, Fitzgerald has prospective recruits hang out with NU’s current players when they come on their official visits. “The guys” are what sold Fitzgerald on NU when he was a player, and it allows recruits to know exactly what they’re getting into when they commit.

The Role of Recruiting Services

The Internet allows us to get information faster than ever before, and that impact has spread to recruiting, as services such as Scout.com allow everyone, from recruits to coaches to fans, to get more inside knowledge in the process.

“I think the Internet, you guys, your rules are different,” Fitzgerald said. “You guys are able to really find kids, so to speak, before anybody else can because there are no rules. It’s the wild, wild west. So what happens is we get information and names. So we have information, now we have to go work on that information. So there’s obviously a very big positive to that.”

The difference between NU and some other programs is how that information is used. Some coaches and schools will trust the evaluation process of recruiting services, while Fitzgerald prefers to trust his assistants’ evaluating abilities.

“It’s my opinion that some schools get some list from (recruiting) websites and they just offer them all,” he said. “And we don’t do that. No disrespect, I believe in our evaluation, because we know our program.”

Fitzgerald said Big Ten teams don’t offer straight from lists on websites, but through connections at other schools, he said people in the profession are able to identify who employs what strategies.

“You can just see,” he said. “Obviously we’ve got a recruiting office and Chris Powers, who’s our Director of Player Personnel, can give kind of a daily update on, ‘Well how about this one?’ and things of that nature, so it’s just what we do, so you can kind of connect the dots pretty easily. And then when coaches leave and go to a different school and kind of take their philosophy with them, that’s when you really know how they go about their business.

“And hey, no disrespect to them. That’s how they believe they’re going to have success and that’s their plan. It’s just not a good fit for us.”

While NU won’t change its principles on its evaluation process or “playing on varsity” rule, the Wildcats’ coaches understand the need to adapt to the changing climate.

“Our staff just is doing a tremendous job,” Fitzgerald said. “I’ll give you (linebackers coach) Randy Bates for an example. He’s been recruiting down in Houston — when he leaves Chicago, he’s been down in Houston — for a number of years. He not only knows about the upcoming seniors, he knows about the upcoming juniors and he might know about a kid who is some freak and had a ridiculous freshman year that A&M, Texas, LSU and Oklahoma are going to probably offer.”

Having relationships and a presence in its recruiting pipelines has helped NU adapt to change easier. That’s especially the case in Chicago, an area the NU staff recruits heavily — the Cats have 32 players from Illinois on the current roster, with many coming from the Chicagoland area.

“All nine of our coaches have an area (to recruit) in Chicago,” Fitzgerald said. “We know every coach, every program and so it’s all about relationship building, and once you’ve got those relationships then you can start to get young men on your campus, you can start to build those relationships, and philosophically we’re going to be a day late, a month late or six months late, (rather) than be the first person in to offer a guy if we don’t have all the information we need.”

And while the 2014 recruiting class could be finished by this time next year, don’t expect the Cats to be offering any eighth graders any time soon.

“We try to handle our business the way we handle our business,” MacPherson said. “Sometimes outside factors make you move up or accelerate your process a little more than you want to. We’re still going to try to do our due diligence and do our homework before we make our decisions for as long as we can.”