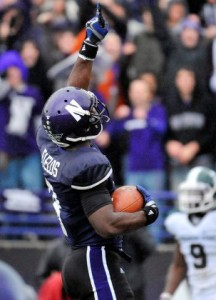 It was all too stressful, all too maddening, all too exasperating and any other adjective you can conjure up to describe the nerve-wracking inevitability of a blown lead in the waning minutes of the fourth quarter. But it was all too familiar.

“The cardiac cats are still alive right now,” joked senior linebacker David Nwabuisi as he stood at the podium following Northwestern’s 42-41 win over Syracuse. These Wildcats are used to this stage by now, conditioned to handle the ramped up pressure of hotly-contested games decided in the final moments. Only the result is not always as favorable as the one engineered here Saturday at the Carrier Dome. It wasn’t so long ago that NU fans were left feeling the same way the Orange faithful felt here today, the painful taste of a close-out effort slipping away in dramatic fashion. The Wildcats’ in-state rival, Illinois, inflicted an excruciating loss on NU to open up Big Ten play last year, with Illini quarterback Nathan Scheelhaase slicing through the Wildcats’ defense in the fourth quarter to provide the final touches on a 38-35 victory. NU held a 28-10 lead mid-way through the third quarter.

This time the comeback effort fell one point short, and the Wildcats emerged as victors. “At the end of the day, we’re 1-0. It’s definitely gratifying,” Nwabuisi said, reflecting on his team’s three-and-a-half-hour whirlwind. “Things didn’t happen the way we wanted them to at the end, but we got the right result. Nothing ever goes the way we planned.”

Improvisation is nothing new for NU, and it proved proficiently adept at the act late in the fourth quarter. The Wildcats faced a six-point deficit with less than three minutes remaining, searching for answers after a near-flawless seven-play, 72-yd drive manufactured by Orange quarterback Ryan Nassib. NU had leveraged an explosive offensive performance to the tune of 35 points, including three touchdowns from starting QB Kain Colter. But as the offense trotted out for the pivotal offensive possession in this back-and-forth high-scoring affair, Colter stood on the sidelines, his helmet by his side, rallying his teammates as they prepared to erase the prospect of Pat Fitzgerald’s first season-opening loss. Trevor Siemian was under center, a backup quarterback suddenly thrust into the biggest spotlight of his college career, the fate of the game essentially rising on his arm.

“I haven’t seen a lot of action,” Siemian noted of his NU playing career to date. “It’s big time football. I got to play a good team out of conference. It’s awesome. I wish we didn’t have to make it so close, but we pulled it out.” In sultry conditions – the temperature in the Carrier Dome fluctuated between 91 and 95 degrees – the third-year sophomore was the epitome of cool as he led the Wildcats on a 10-play, 75-yard drive. Siemian connected on six passes, a composed display of pinpoint accuracy and versatily. It was here, in this crucial final possession, that NU’s much-ballyhooed receiving corps flaunted its depth and versatility. First Demetrius Fields hauled in a 19-yd reception, then Tony Jones for three yards. Mike Jensen and Kyle Prater got in on the fun, too, each doing their part in this meticulously crafted foray into Syracuse territory.

The Orange remained defiant against this slow aerial onslaught, and a Siemian sack inside the final minute of regulation stalled the Wildcats’ momentum as they neared the redzone. On the next play Siemian hesitated in the pocket, with tight coverage eliminating the various receiving options that had propelled him to that point, only to scamper out of bounds for an eight-yard gain, still seven yards short of a first down. A questionable unnecessary roughness penalty sustained Siemian’s heroics; one play later, Siemian was celebrating the comeback he generated as Fields reeled in the game-winning touchdown catch. Even the Wildcats leaky defense couldn’t cough up this sweet victory with 44 seconds left.

“It was a great play, a great route for us,” Siemian said of NU’s final score. “Dan [Persa] and Jeremy [Ebert] make that play look really easy. Fields made a good move on the safety and I just threw the ball up and let him take care of the rest.”

The way Siemian marched the troops down the field with such poise, such unflappable composure, everyone’s biggest post-game query was fairly obvious. “I’ll make sure I’m clear here: Kain is our starting quarterback,” And with that, Fitzgerald put to rest any questions you might have over a quarterback controversy in Evanston. On one hand, swapping Colter with Siemian to run the two-minute offense makes sense: the No. 2 has long been touted the stronger and more accurate passer, plus Colter was still shaking off a shoulder injury sustained on a blind-side hit earlier in the game. On another hand, Colter returned to the game after withstanding that blow and appeared fit to play. The Wildcats were within striking distance at this late juncture largely because of Colter’s dynamic quarterback play – two fumbles and several crippling penalties didn’t help, either – to the point where it almost seemed unfair that the dual-threat signal-caller was being robbed of this opportunity, particularly after the late-game moxie he flashed in leading NU to its season-defining upset at Nebraska less than a year ago. From Colter’s perspective, the switch was not at all surprising.

“It was because of the injury,” he concluded with a matter-of-fact abruptness. “Trevor went out there and did a great job. That was big time. It’s great to see him do big things.”

The win, unsettling and gut-wrenching and heart-pumping though it was, brought a strong sense of levity and delight to the NU locker room. Northwestern athletic director Jim Phillips sported a boyish grin as he hugged coaches on their way to the team buses. “Anyway we can get ‘em,” he smirked, a spirited bounce in his step as he jostled to the exit. Yet the performance should ignite concern among NU coaches and players as they prepare for next week’s game against Vanderbilt, an emerging SEC foe fresh off going toe-to-toe Thursday night with East Division contender South Carolina. The Wildcats didn’t answer any of the significant uncertainty heading into this season about the secondary, which allowed 470 passing yards and four touchdowns. The defensive line looked shaky all afternoon, with sporadic bursts of pressure blipping long stretches where Nassib was afforded luxurious amounts of time and space to operate in the pocket. The running game – besides an impressive showing from Venric Mark, who on this day will be remembered more than anything else for a pair of scintillating punt returns, one an 82-yard sprint to the end zone – couldn’t get going behind an offensive line that struggled to create enough holes. The Wildcats will need to improve in all of these facets of the game – and perhaps a few more – if they hope to take down the Commodores next week.

“I know a lot more about our football team than I did 3.5 hours ago,” Fitzgerald noted after one of the most hectic games of his tenure. NU survived the Orange, and that is to be celebrated, no doubt. But it was not the sort of performance these Wildcats hoped for, not the comforting victory they envisioned when they held a commanding 22-point lead mid-way through the third quarter.