Plays of the Week: Shifting Gears

Share All sharing options for: Plays of the Week: Shifting Gears

Anyone who watches a lot of college football will eventually run across a team that constantly moves players around before the snap. A few teams (in recent years most notably Boise State) make it work, messing with opposing defenses by forcing them to switch alignments just before the snap. More often, the offense confuses itself and racks up penalty yardage by failing to get properly set of taking so long that the play clock runs down. Northwestern, much to my relief, is not normally an offense the emphasizes offensive shifts. Against Vanderbilt, however, Northwestern used a simple shift to set up a pair of critical plays.

On third and one from the Vanderbilt 25, trailing 10-6, Northwestern lines up in the pistol with two receivers right, Anthony Battle as a tight end left, and Tim Riley to the left of Trevor Siemian as a fullback. Venric Mark is the running back. Vanderbilt puts seven in the box in a 4-3 under front, with a defensive back over each receiver and two deep safeties. 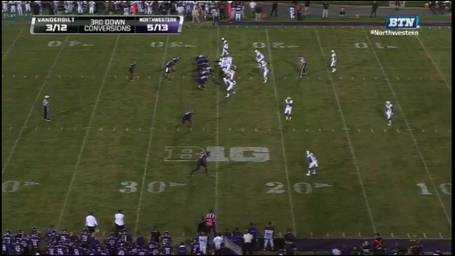 Once Vanderbilt is lined up, Northwestern shifts the tight end and fullback to the right side of the formation, forcing Vanderbilt to realign. The circled player immediately backs off the line, removing him from any inside runs. 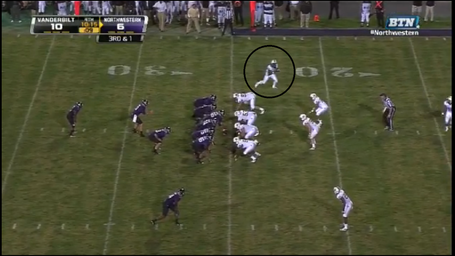 The secondary rotates, with the defender over the slot receiver moving towards the box while the safety to the offensive right replaces him. The other safety rotates to the deep middle. When the ball is snapped, Vanderbilt hasn't finished realigning and has only 6 men in position to play an inside run while Northwestern has 7 blockers. 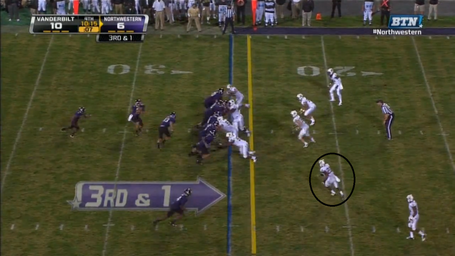 The offensive line blocks inside zone to the right, Riley comes across to seal off the backside end, and Mark has a lane for a first down.. 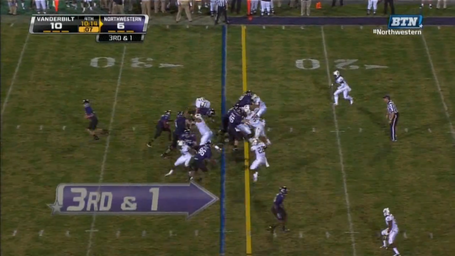 The defender who backed off the line after the shift eventually makes a tackle after a gain of ten. 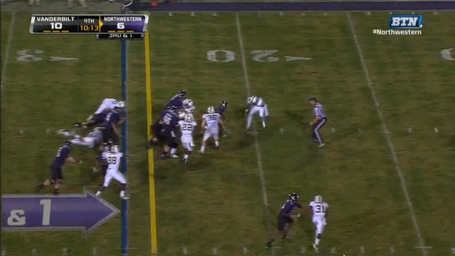 Vanderbilt was slow to react to the shift, and their reaction left Northwestern with a numerical advantage in the box. With only one yard to go, the defense removed a player from the line of scrimmage and never got him replaced. Furthermore, his replacement as a run defender was slow to arrive, giving himself little chance of making a play unless Mark tried to bounce the play to the right. Two plays later, Northwestern took the lead for the first time off of another Mark run and took control of the game.

At this point, you are probably wondering why I just wrote up an unspectacular short-yardage play. Northwestern used the same shift on another third down later in the quarter. This time, Northwestern was leading 16-13 on third and 19 from the Vanderbilt 29. Kain Colter lines up at quarterback, with the formation flipped: the receivers are to the left and Riley and Battle are to the right. Once again, Vandy puts a defender over each slot receiver and lines up the front seven in an under front. The defense also brings a safety down on the strong side, while the other safety lines up in the deep middle. 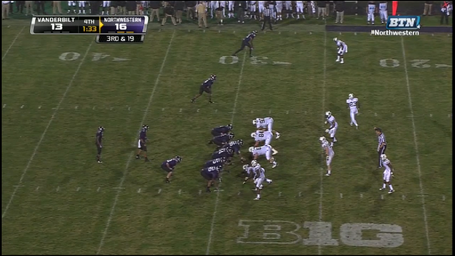 Northwestern uses the same shift, and Vanderbilt responds by flipping the linebackers to maintain the under front and moving the safety in the box to the new strong side. 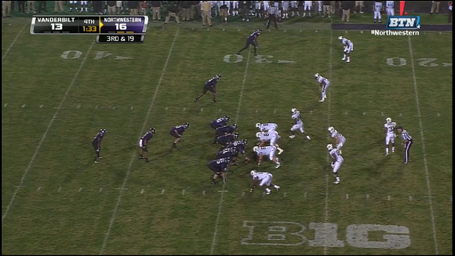 From a different angle, we can also see that the deep safety is also shaded towards the strong side of the formation. 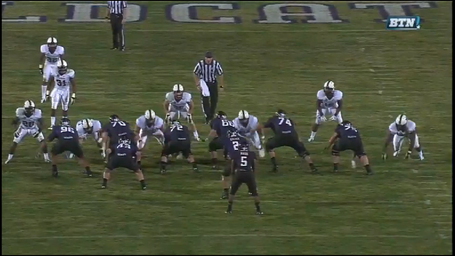 This image shows just how heavily Vanderbilt is weighted to the offensive left: there are only three defenders to the right of the center, with the other eight (including the entire secondary) to the left. At the snap, Colter heads left behind outside zone blocking. Venric Mark, lined up at tailback, heads right to help on the backside. Jack Konopka takes initial steps to the left before turning back and blocking the right defensive end. The defense flows with the offense, overwhelming the blocking to the left. They also leave a massive cutback lane to the right. 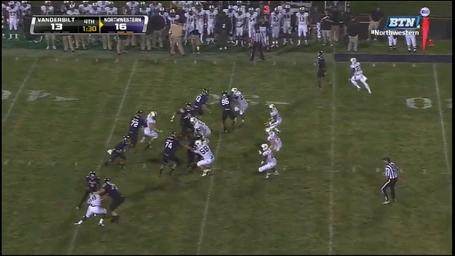 Colter changes directions and breaks into the open field. The linebackers have completely lost contain, while the right defensive end is deep in the backfield facing a double team of Venric Mark and Jack Konopka. The only question is whether the deep safety will be able prevent a touchdown. 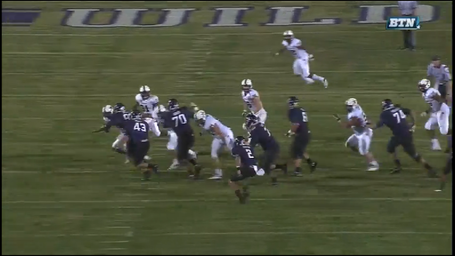 To the safety's credit, he initially stayed in position, and when Colter cuts back to the right he has a decent angle to cut off the run. Unfortunately for him, his hips are turned in the wrong direction, and Colter is an excellent athlete. The safety never gets close to making a tackle, and Colter delivers the finishing blow.

This shift was a nice wrinkle to take advantage of defensive reactions. On the first play, a sound concept for adjusting to a change in the offensive strength was never fully executed, leaving Vanderbilt outnumbered in a critical situation. On the second, Vanderbilt's adjustment left them in an extremely unbalanced defensive alignment, with only two defensive linemen and a linebacker defending half the field against two excellent open field runners. To my eye, it appears that the blocking scheme was intended to open a cutback lane, and Konopka and Mark handled the defender who was supposed to contain the backside nicely, producing an easy touchdown to ice the game. One final factor, which seems obvious but isn't always present: this shift worked because it started from a formation that presents a realistic threat (Northwestern used the initial formation on several other plays).

Like last week, the offense had a strong finish to a generally underwhelming day. Vanderbilt's defense was extremely good in coverage, and Northwestern missed a couple of big plays through drops and a costly overthrow. On that kind of a day, a minor wrinkle in the gameplan can make all the difference, as these two plays show.