Northwestern-Vanderbilt: A closer look at the defense

Share All sharing options for: Northwestern-Vanderbilt: A closer look at the defense

One more note about the Vanderbilt game before we put it to bed. Northwestern fans are downright giddy that the defensive secondary, which, need I remind you, was torched for 486 yards through the air against Syracuse, drastically improved against Vandy, giving up just 217 yards. Vandy fans, meanwhile, are kvetching that it was more their putrid playcalling and lack of execution that led to their offensive shutdown.

So, which was it? Probably a little of both, as I'll show in a bit. First, though, a little chalk talk. Below is a screenshot of NU's base defense. 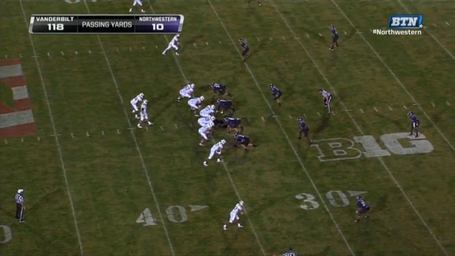 It's a pretty basic 4-3, bend-don't-break defense. You've got four down linemen, and three linebackers. The two outside linebackers (Chi Chi Ariguzo and David Nwabuisi) are covering the slot receiver and the tight end. The cornerbacks are one-on-one against the outside receivers, giving up a 7-9 yard cushion, to guard against being beat deep. Quinn Evans is the corner at the bottom of the picture, and you can just see the feet of Demetrius Dugar at the top of the screen. The safeties (Ibraheim Campbell and Jared Carpenter) are playing what appears to be a Cover 2 zone Cover 4 zone (thanks, gocatsgo2003 in the comments!) up top.

Here's another look from a lower angle in the Syracuse game: 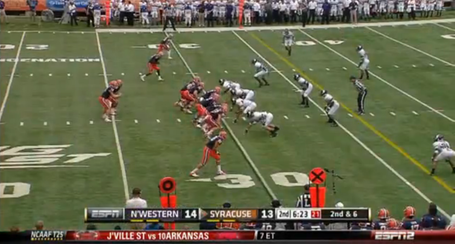 Again, you've got the four down linemen, the linebackers positioned to play the slot receiver and the tight end, the corners giving the 7-8 yard cushion, and the safeties (one of whom is off-screen right) playing Cover 2 Cover 4.

Occasionally, the offense will overload one side with three receivers, as in this screenshot: 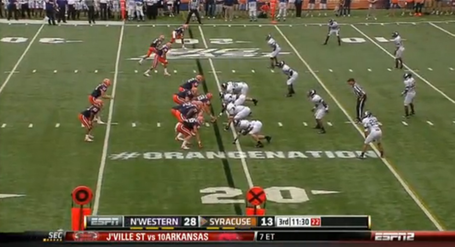 Now, you've got the defense shifted over, too. Dugar, the corner at the bottom, is now covering either the tight end or watching the running back. Nick Van Hoose, the corner at the top of the screen, is 8 yards off the outside receiver. You've got the will linebacker lined up to cover one of the two inside receivers. A safety (Campbell, I think) is over the top of him to help cover one of the inside receivers if he goes deep. The middle linebacker (Damien Proby) is shaded over to help with short routes, and the other safety (either Davion Fleming or Carpenter) is patrolling the middle of the field.

Sometimes on obvious passing downs, we bring in a nickel package, with Hunter Bates as the extra defensive back. He takes the place of one of the linemen, when we go to a three-man rush, or one of the linebackers.

But at any rate, our base defense is shown in the top two pictures, with the shift shown in the third picture if the offense lines up three receivers to one side.

That generous cushion that our corners and coverage linebackers give is a deliberately exposed weakness. It's part of the bend-don't-break philosophy. Our defensive backs generally don't have the speed, size and/or athleticism to consistently guard elite wide receivers right off the line, where they might get outmuscled or juked past. So we give up the cushion to protect against giving up the home-run pass, even though good, accurate quarterbacks can exploit the cushion and carve us up five to six yards at a time.

This is pretty much what Vanderbilt did at the outset of the game. Coming into the contest, I would have thought that Vanderbilt's plan would be to throw early and often, especially against Dugar, who got flagged time and time again against Syracuse's receivers. But an injury on the second play of the game to opposite corner Van Hoose might have changed that game plan, as Vandy QB Jordan Rodgers chose to pick on backup Evans, to mixed results.

I went back and looked at every passing play that Vanderbilt had. There were 37 of them, by my count. Three resulted in sacks, and one was a short QB scramble when the defensive line got some pressure. One other pass was batted down at the line. Another was a 7-yard check-down dump-off to a running back, when nobody was open downfield.

So that leaves 31 pass attempts that Vanderbilt attempted by design. Of these, nine were either screen passes, swing passes, or passes in the flat, designed to take advantage of the big cushion that Vandy's receivers were given. These horizontal passes were by and large very successful, as eight of them were completed for a total of 105 yards. That's an average of 13.1 yards per completion.

The biggest of those was a 55-yard screen pass to running back Zac Stacy late in the game. Nwabuisi was the closest defender but couldn't catch up to Stacy in the backfield, and it was off to the races. Now, obviously, you can't run the same play over and over again, or the defense will eventually catch on, but it's a bit puzzling why Vanderbilt didn't go to these plays more often, given how successful they were at it. Even if you take away the 55-yarder, that still means a 7.1-yard average on those horizontal passes.

So that leaves 22 pass attempts that went downfield. How did our coverage do? Here's the breakdown:

Demetrius Dugar: targeted 4 times, 2 completions for 37 yards, including one TD

On some of the passes, especially the ones involving the linebackers and safeties, the coverages looked like zones, so I counted the person closest to the receiver as the targeted defender.

Evans, as I said, clearly got picked on, and for the most part, he held his own. Though, of the six incompletions, one was a ball that went right through the hands of the receiver in the endzone in the 4th quarter on a key 3rd and goal (Vandy would have to settle for a field goal), one was when a receiver slipped, and two others were misfires by Rodgers off target. So, a bit of a mixed bag here.

Dugar was tested on Vanderbilt's first play from scrimmage, when Rodgers tried a long pass to Matthews. Dugar was stride for stride with Matthews, and unlike in the Syracuse game, when he seemed to not have any idea where the ball was, he actually turned to make a play on it. He would have been there for a possible interception, too, if Jared Carpenter hadn't batted the ball away first. Dugar did end up giving up the lone touchdown, when he was beaten by Jordan Matthews on a skinny post from the NU 22 yard line on Vanderbilt's first drive. The other notable play involving Dugar was when he got pushed in the back by Matthews on what looked like an offensive interference penalty, but it wasn't called, and Matthews ended up dropping the ball anyway.

Unlike in the Syracuse game, our safeties were rarely involved in one-on-one coverage with receivers going deep. I don't know if this was due to inept scouting on Vanderbilt's part, or if Rodgers simply wasn't able or willing to go deep.

All in all, the secondary held it together pretty well, as much as can be expected. They were aided by a resurgent defensive line, which recorded three sacks and a couple of QB hurries. Strong linebacker play also helped, as both Nwabuisi and Ariguzo nearly had interceptions, and Nwabuisi also batted a pass down at the line on a blitz.

But playcalling and Vanderbilt's lack of execution certainly helped. If Rodgers was a little more accurate or his receivers were more reliable, especially on that whiff in the endzone in the 4th quarter, we'd probably be singing a different tune.

Also, it should be noted that Syracuse looks like it actually has an offense, seeing as how they held their own offensively against USC, whereas Vanderbilt....well, they try hard.