To get you ready for each of Northwestern’s opponents, we’re singling out players to watch on both sides of the ball, one major strength, one glaring weakness and one under the radar player to keep an eye on. For some statistical insight, we’ll also provide context with some basic numbers and facts. This week we look at Boston College.

Three coordinator changes in two years have impeded Rettig’s development as a passer. This season, under Doug Martin, Rettig has thrived, passing for 660 yards and five touchdowns in two games while developing a nice connection with junior wideout Alex Amidon. With a collection of quarterbacks as dynamic and as talented as in this year’s ACC – Clemson’s Tajh Boyd, NC State’s Mike Glennon, Virginia Tech’s Logan Thomas, Florida State’s EJ Manuel, to name a few – Rettig’s emergence is going somewhat unnoticed. He already ranks fifth nationally in total passing yards, and that’s without fully asserting himself within Martin’s West Coast system. His numbers will regress once he faces stronger defenses, but so far Rettig – empowered by the newfound freedoms afforded by Martin’s wide-open system – has given the offense the spark it sorely needed last season. Earlier this week Pat Fitzgerald said Rettig could be the best quarterback his team will see all season. Rettig has given no indication Fitzgerald’s statement is in any way off-base. He made major strides this offseason, and now has the looks of a rising star. Martin’s scheme seems the perfect fit for his strong and accurate arm. If he continues to progress as a passer, and Amidon keeps putting up 100-yd receiving games, this BC offense will finish the season in a much better place than it did the last, when it ranked last in the ACC in both scoring offense and total offense.

Losing one of the best linebackers in NCAA history would cripple any defense. For BC, Luke Kuechly was its do-everything one-man wrecking crew. His presence can’t be replaced by any one player, only recreated in different forms. Pierre-Louis is the best hope the Eagles have of making up for their departed star. A highly-touted recruit out of highschool, Pierre-Louis eschewed Stanford, Virginia and Duke before committing to Frank Spaziani at Boston College. He finished second on the team in tackles with 74 despite missing three games to injury. Pierre-Louis is a rangy playmaker, relentless in pursuit and adept in coverage. In his third season as a full-time starter, anything short of All-conference recognition will be a minor disappointment. Though Pierre-Louis plays on the outside, Kuechly’s departure allows him to become the central nerve of this defense, in the same vein as Kuechly three-year command over the middle of the defense. He recorded 16 tackles, a career-high, in a home loss to Northwestern. With continued physical development and a better understanding of Spaziani’s defense, plus a wealth of talented players around him – including middle linebackers Nick Clancy and Sean Duggan and outside linebacker Steele Divitto – Pierre-Louis is well on his way to a breakout season. 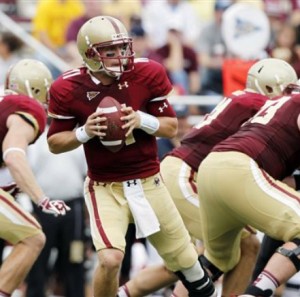 The injury and eventual dismissal of all-time leading rusher Montel Harris accelerated the transition to a more pass-oriented attack. When BC tabbed Martin for its offensive coordinator job, the movement was complete. Before joining the Eagles’ staff, Martin held the same position at New Mexico State, where in 2011 the Aggies ranked 25th among FBS teams in passing offense. Martin’s system provides exactly the sort of schematic leeway Rettig needs to blossom into a top-tier ACC quarterback. More importantly, the Eagles are throwing the ball more often. For the past two seasons, BC has stuck to its traditional run-heavy roots. Now that Harris is gone, Rettig can fire away. The main beneficiary of this philosophy shift is Amidon, who through two games has compiled 16 receptions for 248 yards and a touchdown. Three of BC’s top pass-catchers (Bobby Swigert, Colin Larmond Jr. and Chris Pantale) have struggled with injuries, which by default made Amidon the team’s best receiving option. He improved in the spring and truly distinguished himself in preseason camp. Amidon has become a centerpiece of BC’s passing attack and looks right on track for a 1,000-yd season. It’s clear Rettig trusts his route-running and Amidon likewise has adapted well to Rettig’s ball placement and timing. This connection has the chance to become one of the ACC’s more dangerous qb-wr tandems. The Eagles have also utilized their three-deep running back core in the passing game. One of those backs, sophomore Tahj Kimble, has racked up 130 receiving yards at an impressive 16.3-yards per reception clip. The first two games of 2012 were no fluke; this is a dangerous passing attack.

The talent and depth at linebacker does not extend to the line, where the Eagles have managed just one sack this season. At end, Brian Mihalik and Kasim Edebali have not generated much in the way of pressure off the edge. The tackle spots haven’t been all that much stronger. The weak line play plagued the Eagles in their week one test with Miami, when true freshman tailback Duke Johnson was allowed to go off for 135 yards on just seven carries. When you get dominated at the line of scrimmage, it’s awfully tough to mount a strong defensive effort. The linebackers, for all their playmaking prowess, will not be effective unless the four players in front of them win their own individual battles. Not only does poor line play affect the run game, it allows opposing quarterbacks to sit in the pocket, survey the field and find open receivers. That’s hardly a recipe for defensive success, particularly with an inexperienced secondary. If opposing offensive lines continue to create holes and thwart BC’s pass-rushing efforts, the Eagles will have trouble stopping anybody. Defense is Spaziani’s area of expertise, but his units have failed to meet expectations during his tenure thanks in large part to poor line play. If it doesn’t improve this season, the Eagles’ can’t hope to see a relevant jump in their win total. Offensive progression aside, poor line play is as important a facet of the game as any on that side of the ball. It’s a crucial element to any successful team’s winning formula.

Under the Radar: RB Tahj Kimble

After Harris went down two games into last season, the Eagles developed three potent rushers make up for the touches lost to his injury and eventual departure. Kimble, a dynamic runner with big-play ability, quickly proved his importance to the post-Harris era. In 10 games Kimble registered 156 yards on the ground, 568 all-purpose yards and 345 kick-return yards. He started off this season with a starring performance against the Hurricanes, in which he totaled 175 all-purpose yards, including a 17-yd touchdown pass in the fourth quarter. His primary threat is at running back, though Kimble is equally dangerous as a receiver out of the backfield. He excels on screen plays and short passes, where he can collect the ball in space and pick up yards after the catch. He was unable to follow up his thrilling season-opener with another strong outing against Maine. But Spaziani didn’t need him against a formidable but altogether inferior FCS opponent. Against Northwestern and the rest of BC’s challenging schedule, Kimble’s speed and explosiveness will be a huge asset. Given the depth at running back, it’s likely Kimble will contribute more in the passing game than as a traditional runner. The point is, Kimble has a diverse repertoire of pass-catching and running skills, one that can’t be overlooked within Martin’s inventive scheme. Whether he’s catching passes or taking handoffs, Kimble is an offensive weapon. He can impact the game in more ways than one, and that’s a treacherous concept for any defensive coordinator to gameplan against.