Share All sharing options for: Northwestern-Boston College: A look at NU's run defense

As you all know, the Wildcats did a great job in defending the run against Boston College, giving up just 25 yards on 21 carries. While Saturday's performance was outstanding, NU has been solid against the run all year: 101 yards vs. Vanderbilt, and 114 yards vs. Syracuse.

I thought I'd take a closer look at what has made the NU run defense so successful thus far, and surprisingly, it's not because of any special schemes or stunts or blitzes or magic wizardry involving Jobu. In fact, of the plays that I reviewed against Boston College, which had 17 rushes from its running backs, NU pretty much ran its defense straight up-- that is, the defensive line got good old-fashioned pushes and the linebackers had disciplined gap coverage.

Allow me to illustrate this by looking at three plays. With screen captures! 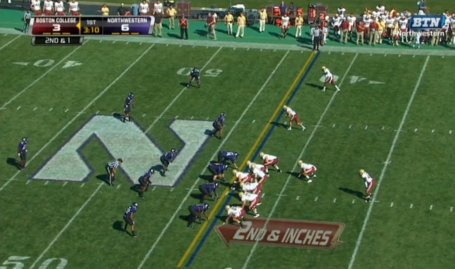 Here we see Boston College setting up on 2nd and inches with a pretty strong run formation. There is a tight end on the left side of the line, plus a fullback in the offset I-formation. The NU defense is playing its base 4-3, Cover 4 (thanks gocatsgo2003!). CB Demetrius Dugar, at the bottom of the screen, is watching the TE; an outside linebacker (Chi Chi Ariguzo, I believe) is covering the slot receiver; CB Nick Van Hoose is giving the cushion on the receiver at the top of the screen.

The defensive line is Dean Lowry and Deonte Gibson as the ends, and Brian Arnfelt and Will Hampton as the tackles, I think. (You can click on each picture to see it enlarged.) 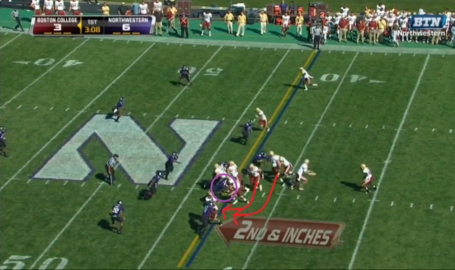 And here we are after the snap. As you can see by my visual aids (Yep, I'm learning how to use Microsoft Paint, too!), the right guard and right tackle both pull, leaving the fullback to take on the defensive end.

This looks designed to be a cutback play. The tight end seals Gibson to the outside, the left tackle takes his man, Hampton, inside, opening up a lane, where the pulling right guard and right tackle can lead the way for the running back, Andre Williams. But keep your eye on my man, Hampton, whom I've circled in purple. 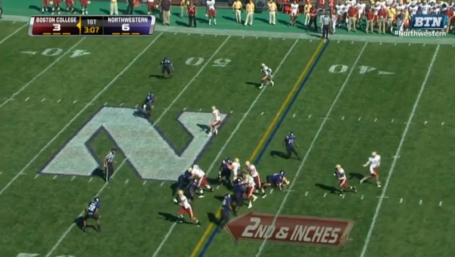 Ok, so now the RB has the ball and is headed to where that lane is supposed to be. But, oh wait, Hampton has gotten such a push on the left tackle that he actually causes the tackle to run into the pulling right guard and right tackle. Meanwhile, the TE has probably released on Gibson a bit too early to look for a block downfield, and Gibson's now free to go after the running back.

The RB has no options here. He can't take it back to the right, because Lowry, the other defensive end, has completely pancaked the fullback, and Ariguzo is flying in unblocked from his linebacker position. 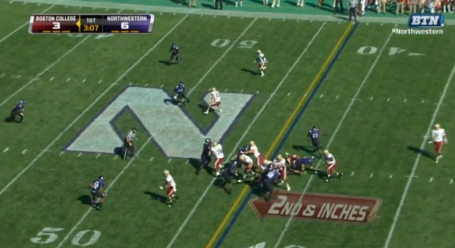 So faced with no good options, the RB just decides to try and plow through the line, which isn't necessarily a bad idea with inches to go to the first down marker. 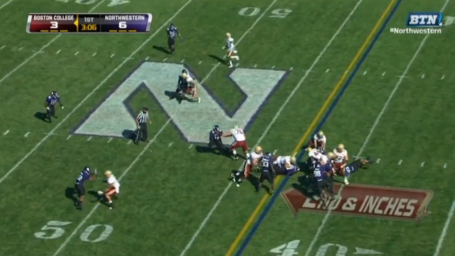 But Lowry, having beaten his blocker, is able to get a hand on Williams, impeding his progress and allowing Ariguzo to finish off the tackle for no gain. Lowry and Ariguzo get credit for the tackle, but really, this no-gainer happened because of Hampton's huge push, busting up the play.

Now let's take a look at another short-yardage situation. This time, Boston College faces 3rd and 1, from the NU 26. 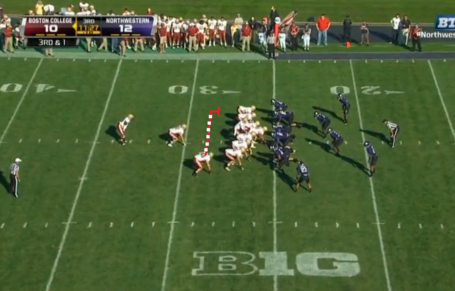 BC is in a jumbo set here, with two tight ends, an H-back, a fullback and a tailback. With BC sending out no wide receivers, NU counters with a goal-line defense. Dugar is playing on the line of scrimmage at the top of the screen. On the other side of the line, an outside linebacker is also on the line (Ariguzo). Van Hoose (No. 23) is playing a yard off the line on the outside. The middle and will linebackers are lined up accordingly, and the two safeties are five yards deep.

Before the snap, BC sends the H-back in motion, as I've indicated with the dotted red line. 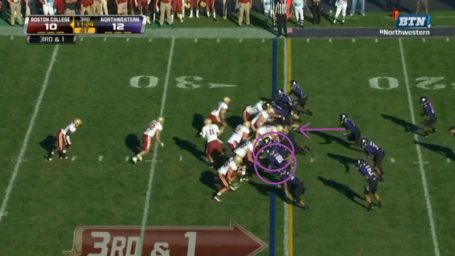 Now here we are after the snap. The left side of BC's offensive line crashes inside, leaving the H-back to take on the defensive end, which I think is Tyler Scott. The run play looks designed to go left, as the fullback is headed that direction.

I've circled in purple the left side of NU's defensive line: DE Quentin Williams and DT Brian Arnfelt. They get great jumps off the snap, and you'll see below what results. The other thing to keep your eye on is the will linebacker (Proby, I think), who is assigned to cover the gap up the middle, as I've indicated with the purple arrow. 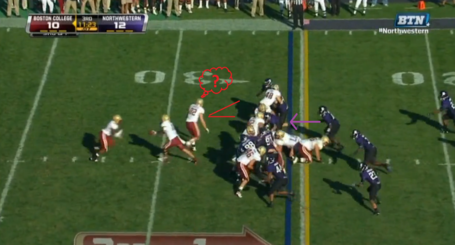 With the left side of the offensive line pinching in and the H-back (No. 48) sealing Tyler Scott to the outside, that opens up a lane, where in theory, the fullback should lead the way for the running back. But NU has two defenders, and the FB has to choose which one to block: Dugar coming off the outside or Proby shooting the gap?

But look at the right side of the offensive line, where Williams (No. 88) and Arnfelt (No. 91) have pushed their way into the backfield. I mean, look at the blue line, where the original line of scrimmage is. And look where Arnfelt and Williams are. For that matter, the other defensive tackle (Sean McEvilly?) has also gotten a nice push. 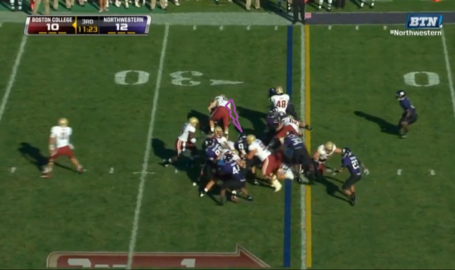 The fullback has decided to go after Dugar and pancakes him. This leaves Proby to shoot the gap, which he does. Meanwhile, the right side of the offensive line has completely broken down. Williams and Arnfelt and, to a lesser extent, Ariguzo, have pushed their guys into the backfield. Arnfelt, in particular, has beaten his blocker, and with the BC running back trying to plunge through the line, Arnfelt lays down the thunder (as I've indicated with the lightning bolt. Paint is pretty cool!) 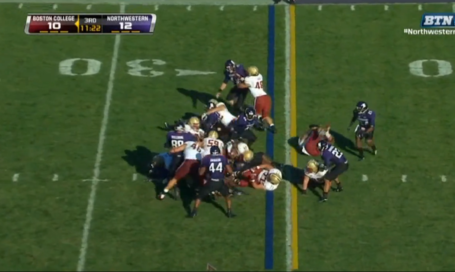 And so here we are, with the running back getting tackled a yard short of the first down. This play was a combination of NU's defensive scheme giving it great coverage of all the holes that the offensive line was trying to develop, plus the huge push by Williams and Arnfelt getting penetration into the backfield, which left the running back with no open lanes.

Had enough? How about one more? This one was a big one: the fumble by BC on the NU five-yard-line in the third quarter, a major momentum swing in the game. 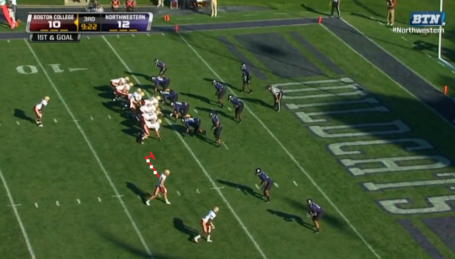 BC is again lined up with two tight ends. This time, though, they have two receivers out right. The slot receiver motions closer to the line before the snap.

NU has four down linemen: (from top of the screen to bottom) Scott, Hampton, Arnfelt and Williams. Dugar is on the edge at the top of the screen. Ariguzo is on the other edge. Ibraheim Campbell is covering the slot receiver, while Van Hoose has the outside receiver. Nwabuisi and Proby are the linebackers lined up four yards deep, while Jared Carpenter is the safety. 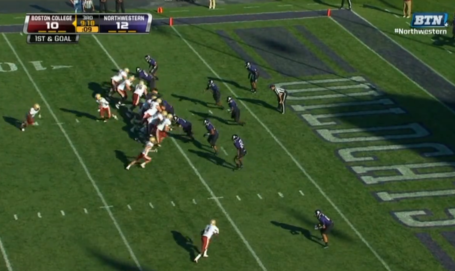 After the snap, the offensive line looks like it's trying to open up two holes for the running back. The left guard and left tackle double team Hampton and pancake him. The center and right guard double team Arnfelt, and the right tackle tries to seal Williams to the outside. 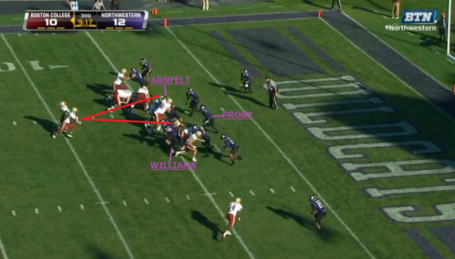 Here we are a few frames later. You might want to click on the pic to magnify it a bit, as there are a lot of moving parts.

I've highlighted in red the two lanes for the running back. At this point, Hampton is completely dominated on the turf. Arnfelt looks completely neutralized. Williams has beaten his man, but he's on the edge. With our bird's eye view, the running back (Rolandan Finch) probably should have taken the left choice. Both of the linebackers, Nwabuisi and Proby, whom I've highlighted, are shading towards the gap on the right of the offensive line, while the safety, Carpenter, is still a bit deep. If Finch goes left, with a five-yard head of steam, he might make it to the end zone, if he can beat Nwabuisi and juke Carpenter.

However, Finch decides to go right. Not entirely indefensible, as there is a bit of a gap there. 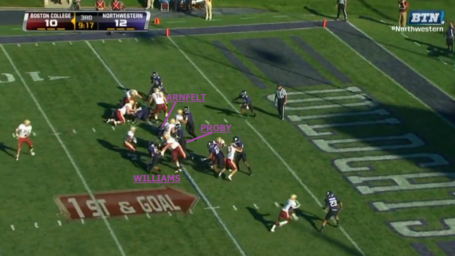 But now look at this. Proby has filled the gap. Williams, who as I already mentioned had beaten his blocker, has Finch contained to the inside. And Arnfelt, free of a double team after Nwabuisi occupies the center and Proby distracts the guard, has gained penetration. Finch is surrounded, unless he can make a quick cut left and make Arnfelt and Williams miss. 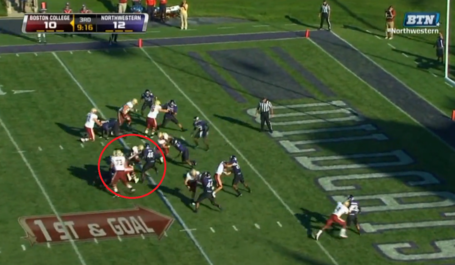 But he doesn't, and as I highlighted in the circle, he's completely wrapped up by the trio of Williams, Arnfelt and Proby. You can just make out Arnfelt's arm going for the strip... 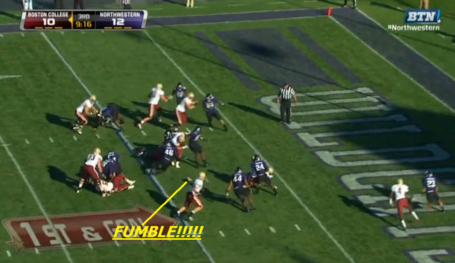 And the ball's loose! Ariguzo falls on the ball, and a touchdown is saved.

So there are three plays that encapsulate why NU's rush defense was so outstanding against Boston College. The defensive line was getting good push and penetration (that's what she said, I know), and the linebackers were swarming to the ball, without abandoning their assignments.

Granted these happen to be three of the best plays in the game that I'm highlighting. Not every BC run was for no gain, and the Eagles did have a couple of decent runs. But bottom line, 25 yards in 21 rushes, NU's front seven deserve a gold star.