Next On The Chopping Block: South Dakota

Share All sharing options for: Next On The Chopping Block: South Dakota 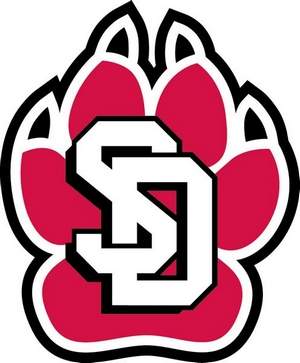 Where: Vermillion, South Dakota. Vermillion - spelled slightly different than the color featured in South Dakota's logo, vermilion - is a town of about 10,000 where the Vermillion river joins the Missouri. It has LITERALLY the most depressing "history" section of a Wikipedia page I have ever read, featuring fun dates like:

Stadium: South Dakota plays in the DakotaDome, a 10,000-seat indoor facility that also hosts basketball and other sports. The Wikipedia ominously hints that the building suffered "numerous roof collapses" before a steel roof was added to the dome.The Wikipedia also notes that it is on North Dakota Street, which just confuses me, especially since I assume all Dakotans of both states are constantly on the verge of erupting into armed intra-national conflict with their northern/southern neighbors.

Interesting alumni: The Yotes have actually produced some pretty notable names in journalism, foremost being Tom Brokaw. The South Dakota native dropped out of the University of Iowa, "where he says he majored in 'beer and co-eds'", and eventually graduated from South Dakota. It was there where he learned how to pronounce words with infinitely more h's than previously deemed possible. Also graduating from USD were Al Neuharth, who founded USA Today and for whom the school's media center is named, and Pat O'Brien, the extremely nasal former Access Hollywood host and occasional sportscaster for whom the New Orleans bar is not named.

Current NFL Players: So far as I can tell, none, although there have been several, and former Dolphins owner and stadium namesake Joe Robbie attended the school.

Mascot: The Coyote, notably, this is pronounced "KI-yoat", like an old-timey prospector - to borrow a phrase from MountainTiger - or hick might say it, and not "Ka-YO-tee", like the character the Road Runner pestered by running away from. This blends with the nickname of "Yotes", but is disappointing for those of us hoping South Dakota was just being Wile E. USD's mascot is named "Charlie Coyote", which is dumb because that would rhyme with the Wile E. pronounciation, but the only thing that rhymes with their pronunciation of "Coyote" is, um, "zygote"? Anyway, coyotes are basically like smaller wolves: they like mammal-killin and live pretty much everywhere. They do not actually hunt roadrunners.

Difference between the amount of times South Dakota has been to the NCAA tournament and the amount of times Northwestern has been: Zero! South Dakota has been transitioning to Division I over the past few seasons, and like Northwestern, has never gone dancing. They were members of the Great West Conference - autobid to the CIT! - for a few years from 2008-2011, and are now in the Summit League with football in the Missouri Valley Football Conference.

Great moments in recent South Dakota sports history: Like I said, they're transitioning to D-I, so there's really only one: a 41-38 upset of Minnesota in 2010, only the school's second game against a FBS team.

QB Dante Warren threw for 352 yards and three touchdowns while running for 81 yards and two more TD's. It led to this brilliant post-game quote from Tim Brewster:

"The depth of my disappointment right now, you cannot measure it."

Poetical, Timmy B. The Coyotes went on to be 4-7 that year, so, way to be Minnesota!

Anyway, this year marks the team's first as a full-fledged FBS member, who also feature a first-year head coach in Joe Glenn. Best of luck to the 'Yotes every week besides this one.