Share All sharing options for: Northwestern Shows Of Brilliant Non-Conference Scheduling in 2012 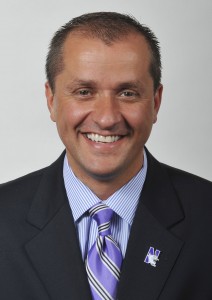 Northwestern has to be the smartest football school in the nation.

“Gross!" I can already hear the University of Chicago people saying. “Would you just give it a rest already?“

“Give me a break,” our readers over in Ann Arbor are exclaiming. “We’re plenty smart here at the University of Michigan.”

Take right now. The Wildcats are currently in the middle of a firestorm over whether they should be included among the nation's Top 25. For those of you who have been asleep at the wheel over the past several days, they weren’t included, but they came close. Both polls, USA Today and AP, have Northwestern among their top vote-getters not currently listed in the Top 25. Whether the Cats should be included is beyond me, but the genius of Northwestern’s schedule makers is that they have generated this type of outrage and attention.

When all is said and done, the Wildcats didn’t really challenge themselves too much in their non-conference schedule. Sure, they beat three FBS teams in their first three weeks of play, but they were favored in each and every game. OK, fine, Vegas favored Vanderbilt, but I was pretty sure Northwestern was going to win all three games, and certainly we can all agree that the Wildcats stood an awfully good chance in all three games.

Northwestern lacked the guts of a Minnesota, which has scheduled nearly certain losses against either California or USC in each of the last three seasons. The Wildcats haven’t exactly gone down to Tuscaloosa, like Joe Paterno’s men did not so long ago, or face the Crimson Tide in Texas, like Brady Hoke’s men did earlier this year. They haven’t traveled to the Rose Bowl, like Nebraska did earlier this season.

So, while they arguably belong in the Top 25, it’s important to keep their triumphs in context. The Wildcats, in my opinion, were ingenious in devising their schedule. They took on a Syracuse team in the season’s opening week that is formidable but hardly fantastic. Sure, the Orange gave USC a challenge a week later, but then they were challenged by Stony Brook, of all schools. Syracuse hasn’t compiled greater than eight wins in a season since 2001 and has gone bowling exactly twice in the last decade.

Vanderbilt, of course, has the prestige of belonging to the Southeastern Conference. They also have the dubious distinction of finishing dead last, or near the cellar, in football’s premiere conference nearly every single year. The Commodores have exactly three conference wins combined over the last three seasons. They’ve posted exactly one winning season in the last 29 years.

And then there's Boston College. The Eagles are clearly the most legitimate of the Wildcats’ opponents thus far, historically-speaking. They used to be a perennial postseason contender, with 12 straight bowl game appearances leading into last season, and certainly Northwestern couldn’t have predicted how slowly the Frank Spaziani era would begin when it placed Boston College on the schedule, but intentional or not, the Wildcats beat a middle-of-the-pack ACC team. No more, no less. Certainly respectable, but not much more than that.

That’s the genius of Northwestern’s schedule. It sounds very serious. Those names! Syracuse. Vanderbilt. Boston College. Those are places where we know football is played. There aren’t any directional hints of weakness in those names. No Eastern and Western titles that make the opponent seem almost laughable. No technological institutes. No sir. Northwestern beat real teams this September and the Wildcats deserve credit for that.

But so does an athletic department that beautifully set up a delicious debate over whether Northwestern should be included in the Top 25 or not. Should they get points for beating three mediocre FBS teams? Maybe. Maybe not. But just creating a debate is a good start in the Wildcats’ march to the promised land of national relevance.