Plays of the Week: Blitz Pickup

Share All sharing options for: Plays of the Week: Blitz Pickup

The South Dakota game was a success, with Northwestern picking up a win and nobody suffering a major injury. The offense fed the Coyotes a steady diet of power runs, while the defense limited South Dakota's offense to scrambles and screen passes. Highlighting a big play after an FCS blowout makes little sense; Northwestern won because of a large talent advantage across the board rather than an exceptional individual performance or a clever scheme.

The benefit of a non-competitive game to coaches is the chance to evaluate as many players as possible in a game situation without running much risk. When the coaches look back at the tape, two plays from the offensive line are likely to stand out as major negatives.

On Northwestern's second drive, Trevor Siemian came in in relief of an injured Kain Colter. After handing off to Treyvon Green on first down, he brings Northwestern to the line on second down. Northwestern has split backs level with Siemian, while South Dakota lines up in a 4-2 with a standup end and 2 high safeties. Before the snap, the corner to the single receiver side creeps towards the box. 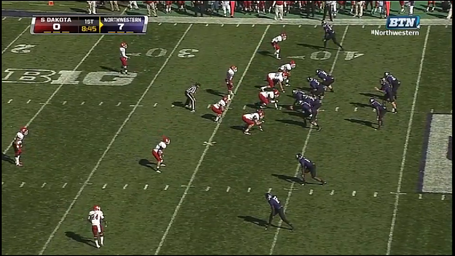 At the snap, the corner rushes along with the 4 defenders on the line. Northwestern keeps Treyvon Green in to protect, and he sets up on Jack Konopka's outside shoulder to take on the blitzing corner. 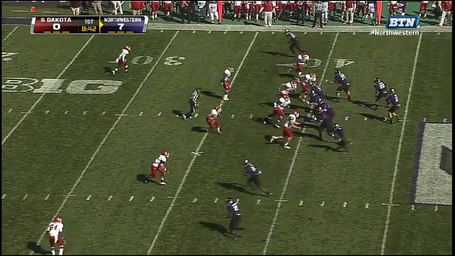 Unfortunately, Konopka also sets up to take on the outside rusher, leaving the standup end unblocked. Konopka realizes what is happening too late and he can only watch the rusher run past. 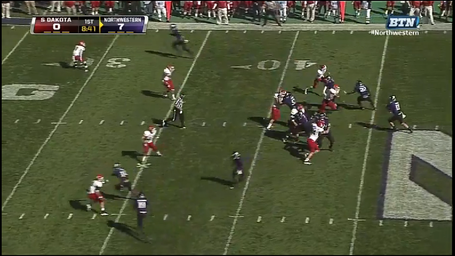 Tyler Starr blasts Siemian for an easy sack. Obviously there was a mistake by the blockers on this play, though without knowing the protection call I can only speculate. The possibility that I consider most likely is that Konopka was supposed to protect the gap inside him, with Green picking up any outside rusher. Whatever the call, leaving a defensive end unblocked was probably not the plan.

The next play came on Northwestern's next drive. After getting the ball back through a turnover on downs, a pair of Venric Mark runs led to a 3rd and 6. Trevor Siemian lines the offense up with an empty backfield, while South Dakota lines up with a three man line and keeps the linebackers and safeties moving presnap to disguise the coverage. After South Dakota shows blitz, the offense checks with the sideline and Tyris Jones motions from the right slot into the backfield. 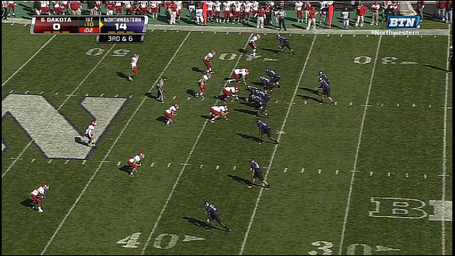 The defense sends the three linemen, a linebacker, and a safety on the rush, with the linebacker and safety both rushing between the nose tackle and the left defensive end. Northwestern has six blockers to pick up the five rushers. 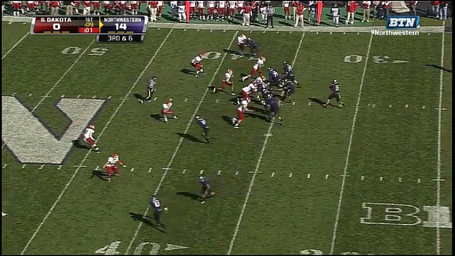 Tyris Jones cuts the linebacker coming through the A-gap, leaving the safety to be picked up by Neal Dieters from the right guard position. Dieters turns towards the safety, but he never moves his feet and lets the rusher in essentially untouched. 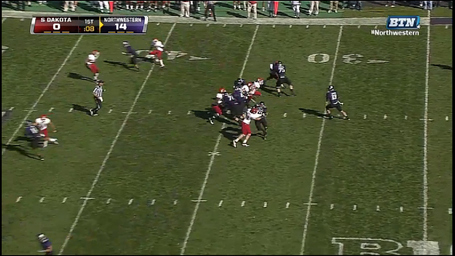 Siemian has a man open down the right sideline, but he gets blasted as he is throwing and the ball floats up and into the arms of a South Dakota defender. Fortunately, the defender can't quite make the interception and Northwestern gets to punt.

Both of these plays were breakdowns in 6-man protections against 5-man rushes, and both involved either miscommunication between a running back and the offensive line or a blown assignment by an offensive lineman. It is possible that part of the problem resulted from running backs who haven't seen much time with the first string failing to mesh with the line, but neither of these blitzes was particularly well disguised or difficult to pick up. The first play, in which a player lined up over the tackle came free, was particularly egregious; if somebody comes free on that blitz, it should be the corner.

Finally, one good play just for fun. The play after the first quarter sack, Northwestern faced 3rd and 15. The offense came to the line with four receivers and a running back. Note that Tony Jones, lined up at the top of the screen, has taken a fairly narrow split. 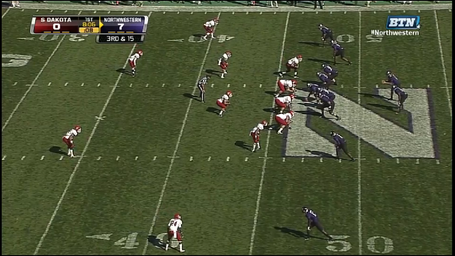 South Dakota rushes four and drops seven. Three receivers head straight downfield, while Jones heads across the formation on a shallow cross. The back checks for blitzers before leaking out to the right. 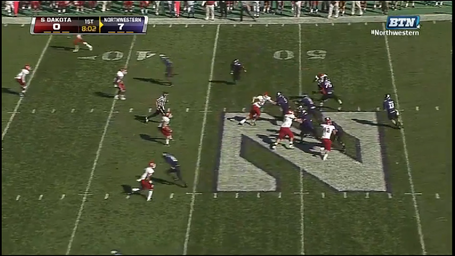 South Dakota is in a conservative zone coverage, most likely quarters, and the undercoverage sticks to the middle of the field. This means that, once he crosses the formation, Jones is all alone. 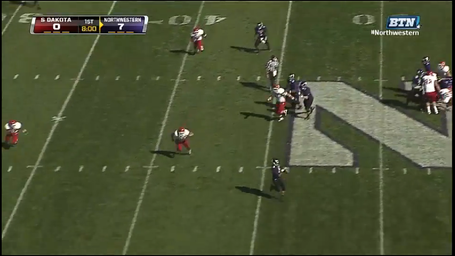 Siemian checks down to the shallow and hits Jones in stride in the left flat. Jones turns upfield and easily picks up the first down, while a downfield block from Rashad Lawrence helps Jones stretch the gain to 42. Plays like this are why it is fun to play overmatched cupcakes.