Share All sharing options for: Plays of the Week: Northwestern's Three TD Passes

We should all be grateful that the rules of football say somebody has to win. In spite of getting dominated on defense and mostly corralled on offense, Northwestern picked up a win through good special teams, fortuitous turnovers, and a few well-executed offensive plays. Since punt returns are difficult to draw conclusions from and the turnovers were mostly gifts from Syracuse, I will look at how the Northwestern offense put points on the board through the air.

With 7:00 to go in the second quarter, Northwestern took over at the Syracuse 21 off a Chi Chi Ariguzo interception. Northwestern lined up on the left hash, with a tight end and two receivers to the right and one receiver to the left. Venric Mark lined up at running back to Kain Colter's right. Syracuse's defensive alignment was well set to handle a run to the left, with three defenders to the center's left to match three blockers and a safety ready to come downhill and clean up. The corner to this side is playing tight on the receiver, suggesting that he is in man coverage, but to the other side the generous cushions suggest zone. 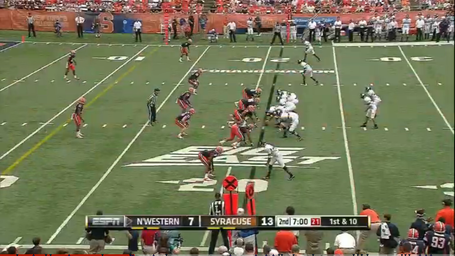 Colter makes a (fairly unconvincing) play action fake to Mark running left, while Brian Mulroe pulls from his left guard position and finds no pass rushers requiring pickup. Colter rolls to the right, looking at the two receivers who have released downfield on that side of the field. The Syracuse linebackers step up a bit, but they are still in good position to pick up Mark or the tight end leaking out underneath. The safety to the offensive right has dropped back outside of the TV frame, while the other safety looks like he is in a deep half zone and the right corner jams his receiver and picks him up in man coverage. 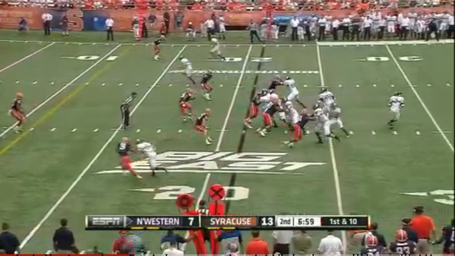 The linebackers are ready to handle Mark underneath, but Mark isn't going to stay underneath. Colter looks back to his left, where Mark is accelerating towards the pylon. With the corner and safety both drawn to the receiver to that side, Mark is one on one with a linebacker. Not many linebackers are going to keep up with Mark in this kind of footrace. 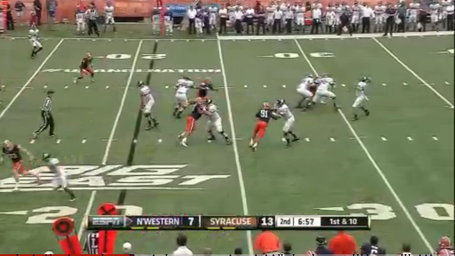 Colter's throw is right on the money, and Mark is able to catch the ball in stride for an easy touchdown on the wheel route. It appears that the left receiver's route was a post, which makes sense as a route that should draw any deep defenders inside. On the offensive right I think the route combination is a simple two-man smash, with the inside receiver running a corner route over a shallower curl from the outside receiver. The play works because Colter's rollout and the route combinations draw the defense's attention to the right, leaving the linebacker one on one with a faster running back. 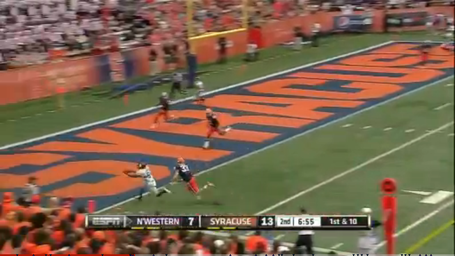 Colter's other passing touchdown came later in the second quarter. A Venric Mark punt return started a drive at the Syracuse 28, and a couple of short passes and a Treyvon Green rush moved the ball to the Syracuse 14. After initially lining up in the left slot, Dan Vitale motioned into the backfield to make a two-back set with two receivers to the right and one to the left. 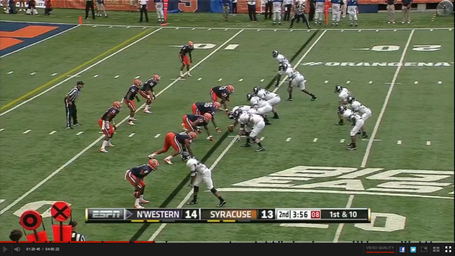 Colter fakes to Treyvon Green moving from left to right, while Vitale heads for the left flat. This time, the linebackers bite hard on the run fake, crashing towards the line of scrimmage. The two receivers on the right cross paths on their release, with Christian Jones running a deep crossing route from the inside and Rashad Lawrence a shallower crossing route from the outside; Tony Jones releases straight downfield from his position as the lone receiver to the left. The pass protection is poor, with a defensive end coming unblocked off the edge, but Colter is able to escape to his left and set up long enough to find his man downfield. 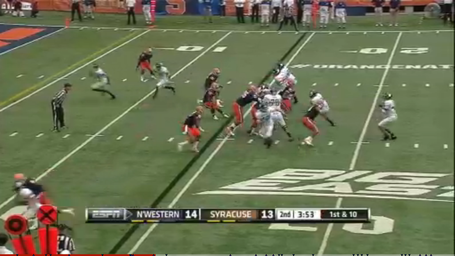 Christian Jones, coming from the right slot, is the second deepest of four Northwestern receivers on the left sideline, stretching the defense vertically along the sideline. The spacing of the shallower three receivers can be seen in the image below. Rashad Lawrence, initially lined up wide to the right, is at about the five, slightly trailing the other two. Vitale is a few yards shallower and towards the sideline, while Jones is open for a well-thrown pass in the end zone. Since most zone coverages only have two levels, this spacing should guarantee that one of the receivers comes open. Tony Jones and a third defender are out of the frame to the left. The second Jones is in an awkward position on the play; it is possible that someone ran the wrong route, but it is also possible that the play is designed with four receivers to the left. 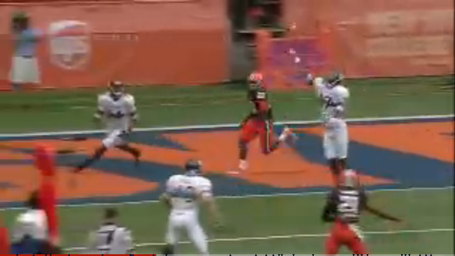 This play is combines a few things into one versatile package. The run fake combined with crossing routes can punish linebackers for crashing run action. The flood concept effectively threatens zone, while the two receivers to the right cross on their release, potentially rubbing off man defenders. I would expect to see this one again.

This is the only one of the passing touchdowns not set up the defense or special teams. After marching from the Northwestern 25 to the Syracuse 9, Northwestern came out in an empty set with Siemian at quarterback. Before the snap, Mike Trumpy motioned into the backfield from the right slot to help with protection against the defenders crowding the line. Just looking at the Syracuse defensive alignment, you should be able to tell why the ball is going left: there are only three Syracuse players outside the defensive end, with only two between Demetrius Fields, lined up as the innermost receiver, and the sideline. 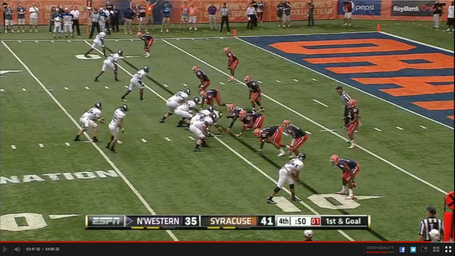 I think that the single receiver runs a fade, but that isn't where the action is on this play. All three receivers left stem vertical until Fields leaves the frame and the two outside receivers break towards the middle of the field. Syracuse is in man coverage, and this whole setup should be familiar if you read my summer piece on the Northwestern passing game because it is almost exactly the way Northwestern ran the smash concept against Illinois on the play I diagrammed there. 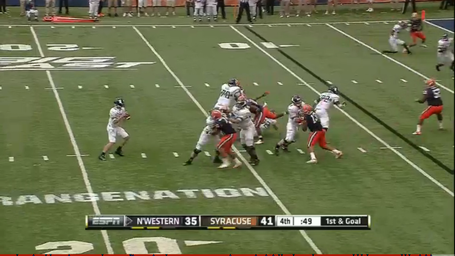 The two outside receivers breaking in to get open against man coverage. This time, however, Fields has a step on his man and Siemian gets the throw just right to hit him near the sideline for the winning touchdown. 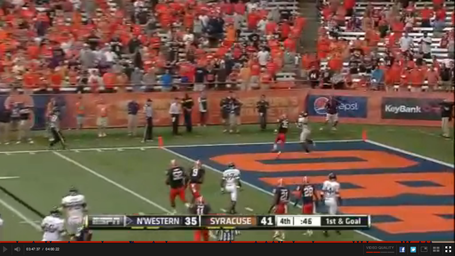 The offense wasn't very good on Saturday. It only put up 337 yards (to 596 for Syracuse). Of 13 drives, only 2 covered more than 40 yards (though those two were a 73 yard touchdown drive and a 75 yard touchdown drive). Two drives went three and out, while another ended on a fumble on the first play. Yet there was some hidden quality in the offense's performance. The yardage disparity is partly explained by the four easy touchdowns: two were scored without the offense taking the field, while two more came off of drives totaling 49 yards. Northwestern managed those two 70+ touchdown drives on a total of five possessions in the second half (though the other three drives were ugly: two three and outs and a 7 play, 26 yarder ending in a punt in Syracuse territory). I think that the first two of these three passes indicate where the passing game should go with Kain Colter: use play action to take advantage of linebackers and safeties eager to shut down his running and move the pocket a bit to help the protection.

There are definitely concerns coming out of Saturday's game, but considering things in a more sober light I think that the game is half a warning about problems with the team and half a warning about the distortions of cumulative stats. Ryan Nassib, a fifth year senior entering his third year as a starter, managed 7.2 YPA; last season, the defense allowed 8.5 YPA over the entire year. The Syracuse offense picked up 6.3 yards per play; this is only a touch higher than last season's 6.1 YPP average from all opposing offenses. The defense also mostly forced Syracuse to work hard for yardage; the Syracuse scoring drives were as follows:

That is four 10+ play TD drives, one 9 play FG drive, one FG drive started from the NU 31, and Quinn Evans falling down on a deep ball. The drive for the missed FG took 8 plays to cover 43 yards. Failing to get the offense off the field on third downs was a problem, but for the most part the defense kept things in front and tackled well. If the DBs can keep their feet and avoid penalties, the defense isn't completely hopeless. On the other side of the ball, removing the botched punt, the offense picked up 4.8 YPP; this is almost a whole yard below last season's season average, but it is not necessarily reason to panic. The offense, especially the running game, was far from perfect on Saturday. Still, it came through when needed, converting short fields into touchdowns and stringing together a drive when the Cats needed it the most.