Share All sharing options for: 'Cats in the NFL: Ebert, Kafka, Dunsmore Cut

In the lead-up to Saturday’s game, some Northwestern-related news flew under the radar. It wasn’t the good kind: three prominent NU players were cut from their respective teams. What follows is a brief outline of what happened, what it means and their chances of landing with another team this season. 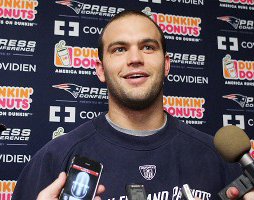 Unable to win a roster spot in the preseason, Ebert must prove his worth on scout team (Photo courtesy Jim Rogash/Getty Images)

An impressive performance at NU’s pro-day vaulted Ebert onto NFL scouts’ radars as the draft approached, and the defending AFC Champion New England Patriots – despite adding a handful of veteran receivers this offseason – took a chance on him in the seventh round. Ebert had six catches and one touchdown in four preseason games and generally took well to his slot role in coordinator Josh McDaniels’ complex offense. But New England boasts one of the deepest receiving corps in the league; it had to part ways with veterans Deion Branch and Jabar Gaffney to cut down to a 53-man roster. For all the speed and quickness and toughness Ebert brings, it’s awfully hard to learn an offense as complex and diverse as the Patriots’ as a rookie.

The physical and mental tools are in place for Ebert to carve out a niche on some NFL team. In the long run, he can develop into an effective slot receiver. First he’ll need to prove himself on special teams. Ebert is probably headed for the Patriots practice squad and could get a call to the Gameday roster for injury purposes or otherwise. He probably won’t see any game action this season, but it remains a very real possibility that Ebert will have a lasting future in the NFL. Four-time Pro Bowl receiver Wes Welker may be headed out of New England at season’s end, but coach Bill Belichik traded for his potential replacement, former Hawaii and St. Louis Rams receiver Greg Salas, over the weekend. If Welker leaves, Ebert would likely need to beat out either Salas or backup slot receiver Julian Edelman to make the roster. Perhaps another team looking to add more depth at the position will look at Ebert, who promises to supply quickness, route-running precision and sure hands – three  vital ingredients in any slot receiver’s makeup. The slot receiver is on the rise in the NFL, and it seems Ebert stands a decent chance of making the college-NFL leap at this position, with the added bonus of gritty special teams play.

*former Northwestern cornerback Marquice Cole survived final cuts and is listed as New England’s fifth cornerback. He’s well-regarded for his play on special teams, but could see time on defense if the Patriots’ secondary continues its recent struggles. 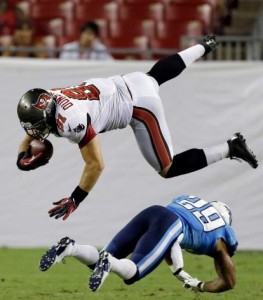 With increased use of pass-catching tight ends, Dunsmore could land a job in the near future (Photo courtesy Chris O'Meara/AP Photo).

Taken two picks before Ebert in the seventh round of this year’s draft, Dunsmore tried to catch on with Tampa Bay as a tight end. He was beat out by Danny Noble, an undrafted rookie out of Toledo. New coach Greg Schiano’s run-oriented offense didn’t help Dunsmore’s case, nor did the Buccaneers’ signing this offseason of former Colts star tight end Dallas Clark. Luke Stocker, Tampa Bay’s No. 2 tight end, flashed good hands and blocking ability throughout last season. All of which left Dunsmore out of the running for a roster spot. The hope was that Dunsmore, with great speed and physicality, could make final cuts on the merits of special teams play. Tough break. He did manage to land a spot on Tampa Bay's practice squad.

The next step for Dunsmore is proving he's worth a gameday roster spot by outplaying his competition on scout team. He’ll have to ply his trade in the practice squad ranks before making his NFL debut, but consistent performance in scout team workouts often leads to gameday call-ups. When Tampa Bay took Dunsmore in the draft, I was never sure what to make of his chances under Schiano. The former Rutgers coach has made no secret of his desire to instill a run-heavy, power offense, and he has the personnel to do it: tailbacks Doug Martin and LeGarrette Blount can be an effective one-two punch. Dunsmore, slightly undersized by NFL tight end standards, brings a skill-set better suited for a pass-happy offense, where he can focus more on receiving, less on run-blocking. He’s a physical blocker and performed well in this regard while at NU, but his best asset at the next level is on special teams and as a pass-catcher. The aerial explosion – teams are passing more than ever before -- in today’s game and the increased use of tight ends in the passing game reflects well on Dunsmore’s chances of making a career in this league. 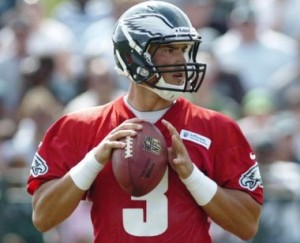 After making a strong push for the backup job, Kafka finds himself without a team (Photo courtesy Ashli Truchon/Express-Times Photo).

With a firm grip on the No. 2 quarterback spot entering training camp, Kafka had a legitimate shot to play this season behind the oft-injured Michael Vick and an even stronger shot to make the roster. Indeed, if you had predicted a few weeks ago that Kafka wouldn’t make final cuts, it would have seemed an unlikely outcome. Kafka showed major improvement in OTAs and continued that progression into camp before a serious hand injury opened the door for rookie Nick Foles to seize the backup job. Foles shined in the preseason, slinging passes with poise and accurary, commanding the pocket and showing beyond-his-years maturity in limited action. Coach Andy Reid feels comfortable with Foles as his No. 2 quarterback – a resounding endorsement, given the likely possibility Foles will start at least one game this season. Veteran Trent Edwards also impressed in camp, which made Kafka expendable.

The optimistic assessment of Kafka’s situation is that his injury was the largest contributing factor to his waiver wire designation. He got hurt, his competition exceled in his absence, but surely, one team is in need of a mobile and arguably strong-armed quarterback with some NFL experience. Maybe not. Kafka has already cleared waivers, which means he’s now free to sign with any team as an unrestricted free agent. The problem isn’t as much Kafka and the skill set he touts as it is Reid’s history of dumping quarterbacks and their performance thereafter. Under Reid’s tenure, the Eagles have dealt A.J. Feeley, Kelly Holcomb, Donovan McNabb and Kevin Kolb, all of whom have suffered severe drop-offs in performance at their new destinations. Reid knows when to get rid of quarterbacks, or that’s at least what his track record suggests. This fact alone may scare teams away from Kafka. But he could fare well in a West Coast offense, one where mobile quarterbacks can make plays outside the pocket. So far, the Cleveland Browns, Green Bay Packers, New England Patriots and Kansas City Chiefs have expressed interest in signing Kafka.