Share All sharing options for: Northwestern Looks For Week Two Improvement in Secondary; Odenigbo to Play 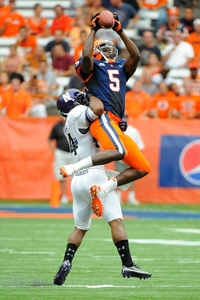 Chi Chi Ariguzo had an interception and a backward pass returned for a touchdown against Syracuse.

The overwhelming refrain from coaches across college football — “even Alabama,” Pat Fitzgerald said — is that teams make their most improvement from week one to week two. That’s no different at Northwestern.

“There’s obviously a lot of improvement to be made in all three phases and that’s what we expect to do this week,” Fitzgerald said.

NU clearly has a lot to fix on defense after giving up 28 unanswered points and nearly blowing a 35-13 third quarter lead. This week, the Wildcats will be facing a Vanderbilt team that led the SEC in 40-yard plays last season, which is bad news for an NU secondary that gave up big play after big play in 2011.

From the box score, the improvement over the last year didn’t look obvious, but Fitzgerald said that doesn’t tell the whole story.

“I thought for about 45 minutes we played much better football on defense than we played the whole year last year, so that was encouraging,” he said. “The other 15 minutes — or about 10 minutes — are things that we’ve got to get fixed.”

What needs to be fixed? First and foremost, NU needs to address the pass interference plays that helped Syracuse drive down the field. Fitzgerald didn’t think he saw much wrong with those plays — he saved himself from trouble by adding, “I guess I was wrong” — but recognized that changes need to be made in similar situations. The Wildcats made a personnel change to try to help, replacing Davion Fleming with Jared Carpenter at starting safety.

“I thought we had great coverage in (the pass interference) situations and we’ve just got to look back and play the ball. Obviously that’s what we coach the guys to do and we didn’t do a good enough job doing that, so we take that responsibility on our shoulders.”

Playing the ball in those situations could have led to more than just the lack of a penalty call.

“We’re just got to make the play, and if we do that, we probably intercept two out of three of those balls,” Fitzgerald said, “and that’s the next step that we’ve got to make.”

That next step involves more than just playing the ball. It’s improving the little things, such as staying focused and getting off the field on third down. In other words, it comes down to Fitzgerald’s favorite buzzword — “execution” — even in the face of adversity.

“There was a direct correlation between being 80 plays (in) or so and losing our focus,” Fitzgerald said, “so we did not handle the momentum shift well there for about 12 minutes. At that point, it’s just, ‘find a way to win.’”

That’s the one thing NU’s defense seemed to get right on Saturday, coming up with a stop late in the game to secure a win. Last year, that rarely happened, so winning is an improvement in itself.

For Fitzgerald, the next best thing to a win is a good learning experience, and NU got both on Saturday.

“It was good to learn from and win,” he said.

Highly-touted freshman defensive end Ifeadi Odenigbo made the two-deep for the first time this week after weeks of speculation as to whether he would redshirt.

“At the end of the day we told him that he was kind of on that flight deck… probably a bump or a bruise away from getting into the game,” Fitzgerald said. “We felt like Ifeadi was the next guy prepared to play.”

That “bump or bruise” came Saturday when defensive end Deonte Gibson went down with an elbow injury. Fitzgerald “doubts” Gibson will be back this week, though he will be back later in the year. That left Odenigbo to take over his spot at backup DE. It also ends the mystery surrounding his redshirt status.

“He’s going to playing,” Fitzgerald said. “We played 44 guys on Saturday, so he would have been 45. We’re playing a lot of guys, so he’ll be in the rotation.”