There is No Quarterback Controversy: Colter is the guy for NU

Share All sharing options for: There is No Quarterback Controversy: Colter is the guy for NU 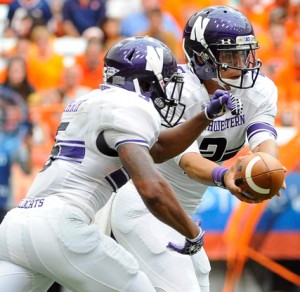 Quarterbacks are scrutinized most heavily in the final moments of games, when pressure mounts and mistakes are costly. There’s a certain trait affixed to signal-callers who elevate their performance in these situations. It’s called “clutch”; some quarterbacks possess this unique quality, some don’t. The ability to withstand the critical circumstances of close games decided late in the fourth quarter is important, but it’s only part of what constitutes successful quarterback play. Still, this “crunch-time” quarterback management so often makes a lasting impression in a way that trivializes the rest of the game. Northwestern quarterback Trevor Siemian was inserted into Saturday’s 42-41 win at Syracuse with under three minutes to go, the Wildcats down six, the ball at NU’s 25-yd line. What followed defines the term “clutch”, the embodiment of quarterbacking heroics. After Siemian put the final touches on his 10-play, 75-yard drive, a perfectly lofted nine-yard touchdown pass to Demetrius Fields, the next step was too predictable.

Onlookers almost immediately leaped to conclude that Fitzgerald and his staff swapped Siemian with starter Kain Colter because they felt more confident with Siemian under center for the all-important final possession. A quarterback controversy? Fitzgerald allayed that existential quandary in the post-game press conference, saying “I’ll make sure I’m clear here, Kain is our starting quarterback.” Many nonetheless continued to believe a battle was brewing at the sport’s preeminent position, that Siemian would eventually supplant Colter on the depth chart. After all, Siemian – not Colter – was the one who drove the Wildcats down the field when they desperately needed a score. Called to action in the game’s climactic moment, Siemian delivered while Colter remained on the sidelines.

The doubts were officially squashed yesterday, when Fitzgerald, addressing the media in Evanston, relayed the events that led to Siemian taking the reins in crunch time. As it turns out, Colter, who had suffered a shoulder injury earlier in the game, recused himself. “I think Trevor would give us a better chance to win,” Colter told offensive coordinator Mick McCall before the final series.” Colter practically said as much after the game Saturday, although he didn’t specifically mention his personal endorsement of Siemian. “It was because of the injury,” Colter said of the quarterback switch. “Trevor went out there and did a great job. That was big time. It’s great to see him do big things.” Now there are no more loose ends, no way to conceivably argue Siemian’s entrance was anything but a mutual decision between Colter and the coaching staff.

So there you have it: quarterback controversy no more. In fact, Saturday’s game did more to strengthen Colter’s hold on the starters job than destabilize it. The athleticism and quickness and explosiveness that made him such a dangerous weapon at multiple positions was readily on display, but Colter flashed improved arm strength and accuracy and a composed pocket poise that eluded him last season. He completed 14 of 21 passes for 135 yards and two touchdowns with zero picks. At least three of those incompletions were dropped passes or poor ball judgments by receivers. Colter looked like a quarterback; not some hybridized wide receiver/running back assigned to the position on the merits of his athletic traits. It was refreshing to see Colter, after looming uncertainty over whether he could handle the starting job from a throwing standpoint, silence the critics. He worked tirelessly to improve his throwing over the offseason, strengthening the shoulder he injured in highschool, and that hardwork was realized in full effect Saturday.

For all of Siemian’s game-saving magic, he simply doesn’t give NU’s offense the same dynamic complexion it has with Colter under center. As a pure pocket-passer, Siemian has the edge on Colter (though I will say after watching Colter Saturday, the gap is narrowing), but the better fit in McCall’s spread – the player promising a more threatening and altogether more successful offensive package – is Colter. We know he can make plays with his feet; now we know he can sling it around pretty well, too. The fact Siemian led an incredible drive to preserve Fitzgerald’s undefeated record in season-openers, with momentum strongly at his detriment, is impressive, but it doesn’t detract from Colter’s dazzling performance. Siemian can play limited snaps to spell Colter, whose style entails a greater injury risk than traditional pocket passers. But beyond keeping Colter fresh and other teams off-balance, Siemian remains the backup. This is Colter’s starting job, and his performance against Syracuse only served to solidify his depth chart supremacy.