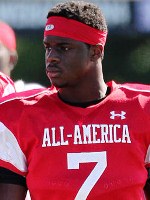 Odenigbo was a highly-touted recruit coming out of high school. (Photo courtesy Scout.com)

“The biggest issue, when Coach Fitzgerald and Coach (Randy) Bates came to my house, I was 205 and they just looked at me like, ‘Man, this kid can’t be a DE. We can try him at linebacker,’” Odenigbo said.

Just a few years later, Odenigbo is penciled in as a backup defensive end for the Wildcats’ game against Vanderbilt, joining fellow true freshman Dean Lowry to make up NU’s second-string unit at the position. Now, Fitzgerald isn’t worried about putting Odenigbo into the action, despite his weight (he’s at 230 now).

This isn’t the position either Lowry or Odenigbo expected to be in for week two of their college career. Both thought they would redshirt, but Odenigbo didn’t even think he’d be a defensive end.

“I’ve come a long way, as in, the whole time I was being recruited as a linebacker, so in my mind I was like, ‘Alright, I’m going to be a linebacker. I don’t have to get that big,’” Odenigbo said. “The first two days I was at linebacker. I was kind of hesitant, but they kept on making me do pass-rushing drills, so they’ve come to realize that’s my true bread and butter, so they moved me to d-line. So it’s been going pretty well now.”

Odenigbo’s redshirt status was still in question through last weekend — Fitzgerald said he was on the “flight deck” and could go either way — but redshirt freshman Deonte Gibson was injured against Syracuse and will be out against Vanderbilt, moving Odenigbo up the depth chart.

There are still questions about Odenigbo’s weight, and while he plans to bulk up this year, he said he is ready for his first collegiate start, even though it’s coming at a different position and a different time than he expected during the summer.

“That’s the plan right now, to put on more weight, but I’m not really worried about the size because the school I went to consisted of 3,000 people, so kids I would go against every week would weigh around 280 to 300,” Odenigbo said, “so I had a lot of Division I athletes in my area, so I’m not worried about that.”

Odenigbo played against a lot of top talent, but he was considered one of those top players, as well. He was a four-star recruit in high school and one of the most highly-touted players NU has ever brought into its program. However, he wasn’t even the first true freshman to crack the depth chart at defensive end. 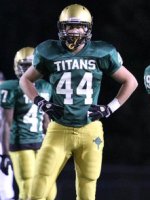 Lowry was the only true freshman to play on defense for NU against Syracuse. (Photo courtesy Scout.com)

That would be Dean Lowry, a 6-foot-6, 230-pound DE from Rockford, Illinois. Lowry was the only true freshman to play on defense against Syracuse, registering a quarterback hurry.

“At first it was a little nerve-racking,” he said of the game, “but as the game went on I felt more confident. I felt like I was playing faster and toward the end of the game I was actually creating an impact.”

Lowry expected to redshirt when he came into the program, but he noted NU’s lack of depth at defensive end and knew that he would have a shot to play if he performed well in camp. Now, he is part of a very young, but very talented, set of defensive ends at NU, and ultimately, part of the future of the program.

“I’m very excited for the future,” Lowry said. “We know that we can’t let it get to our head. We’ve just got to keep working hard and just keep grinding.”

But the future is now for the Cats, who face arguably their toughest non-conference test this week against Vanderbilt. Fitzgerald made it clear that Lowry and Odenigbo aren’t playing for experience down the road; they’re playing to win right now.

“We wouldn’t be playing them unless we thought they were going to help us win,” Fitzgerald said. “Our job is to win, end of discussion.”