To get you ready for each of Northwestern’s opponents, we’re singling out players to watch on both sides of the ball, one major strength, one glaring weakness and one under the radar player to keep an eye on. For some statistical insight, we’ll also provide context with some basic numbers and facts. This week we look at Vanderbilt

The chief concern with Rodgers last season was completion percentage. Despite flashes of brilliance – He threw for 297 yards and two touchdowns while also picking up 66 yards and a score on the ground in a five-point loss at Florida – he couldn’t string together a series of strong performances. His completion percentage fluctuated on a wide spectrum, from 21.1 percent on Oct. 15 against Georgia to 67.9 percent on Nov. 5 against the Gators. Rodgers finished with a season mark of 50 percent, far from an ideal execution rate for any quarterback. This season, with a batch of explosive receivers at his disposal – most notably junior Jordan Matthews, who registered eight catches for 147 yards and a touchdown against South Carolina last week, and deep threat Josh Boyd – Rodgers is poised to move into the spotlight. The problem isn’t his deep throwing so much as it is short passes and intermediate routes. If he can clean up the crispness and accuracy on those crucial 5 to 10-yard throws, Rodgers, who should have greater freedom in the passing game after seven starts last season, will blossom into one of the SEC’s better signal-callers.

There is no clear-cut method to replace two-time team captain and vocal leader Chris Marve. He was the heart and soul of the defense, and a dynamic playmaker. But Barnes is doing his best to ease the loss. A 6-4, 235-pound outside linebacker, Barnes makes plays sideline to sideline and brings great energy to the defense. He’s taken up much of Marve’s leadership and traffic-directing responsibility, so he his emergence is just as important for competitive reasons as it is intangible ones. This defense needs a vocal presence to emerge this season, and Barnes has made it clear he intends to step into that role. Another player to watch here is junior Chase Garnham, who has made significant strides over the offseason and will help Barnes unify and groom a thin linebacking corps. Finding a way to replace your defensive leader and arguably its best players is never an easy job, but the Commodores think they have a viable fill-in. As Barnes progresses this season, he will garner more and more of Marve’s former responsibilities. Garnham should help shoulder the load.

From a talent perspective, the Commodores’ trio of Rodgers, Matthews and running back Zac Stacy matches up reasonably well with any threesome in the SEC. For Rodgers, it’s about improving his short and intermediate passing accuracy and connecting on those critical third and long situations. Matthews showed last week against South Carolina just how explosive and dangerous he can be, and it seems he has formed a nice wavelength with Rodgers, even at this early stage in the season. Matthews is a superb athlete with great straight-line speed and uncanny jump-ball ability. As deep threats go, there are few as threatening as Matthews. If you watched last week’s game, Stacy was a mere afterthought in the Gamecocks’ 17-13 win. But that poor performance is more blip than trend, and he should get back on track as early as this week. Stacy came up against one of the most fearsome front sevens in college football. Most tailbacks are going to struggle against South Carolina; Stacy’s uninspiring performance came as no surprise. He should get back on track as early as this week. The Rodgers-Matthews connection already looked in midseason form last week, and Stacy, despite a regrettable performance, remains one of the SEC’s premier backs. Many attributed Vanderbilt’s pluckiness last season to coach James Franklin’s fiery personality. He certainly deserves a robust round of applause for instilling in his team a fiery defiance. But this team will no longer win on spirit and pride alone; it has the weapons to challenge the league’s elite defenses. 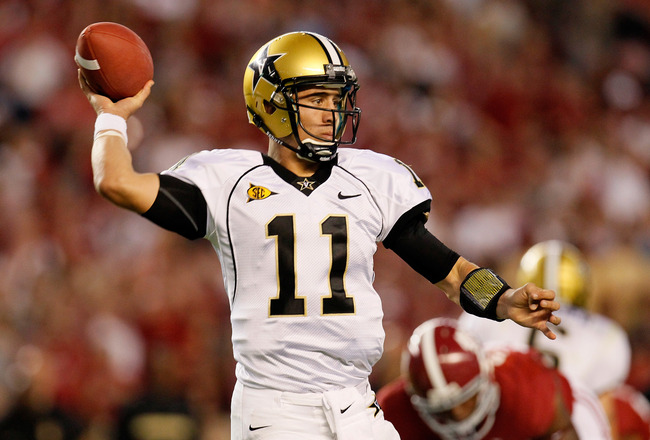 If he can improve his throwing accuracy, Rodgers could have a huge season (Photo courtesy Kevin C. Cox/Getty Images).

Four times last season the Commodores nearly toppled a superior SEC opponent, and five times they came away with a bitter taste in their mouth after falling by six or fewer points in each contest. First it was Georgia (33-28), then (10) Arkansas (31-28), at Florida (26-21), at Tennessee (27-21). So when they nearly picked off South Carolina at home last week, the performance was equal parts encouraging and disappointing. Playing elite teams tough shows you have the talent and depth to compete with the big boys, but unless the Commodores can come away victorious in some of those games, they can’t hope to challenge for division and conference titles. What’s puzzling for Franklin is the inability to address close-game performance by way of strategic or schematic wisdom. Winning close games is about execution and mental toughness and the Commodores have lacked those fundamental qualities when they need them most. Powerhouse programs win games not only because they bring in the best players and have the best coaches, facilities, resources and so on. They win because their program fosters an environment demanding success. These major conference juggernauts just find ways to win games; the art of the win is embedded in practices, team meetings and the program more broadly. Vanderbilt needs to establish that culture, that do-or-die attitude in the final moments of games.

Under the Radar: WR Josh Grady

Even teams with talent and depth and explosive skill players like Vanderbilt need a few schematic complexities to break out in specific situations. Grady gives coordinator John Donovan the dual-threat playmaker he needs to implement the Wildcat offense, which started out as a gimmicky wrinkle but has metastasized into a widespread offensive staple. Grady, a former quarterback, orchestrated the unique scheme to perfection during spring practice. In the black team’s 33-0 beatdown in the spring game, Grady – who lined up at wildcat quarterback and wide receiver – ran for 35 yards and hit Matthews on a 54-yard touchdown pass. He is an explosive athlete with an ideal skill set for the Wildcat system. Given the Commodores’ emphasis on this schematic variant in spring practice, it seems their intended use of the Wildcat goes beyond distracting defensive coordinators from their primary offensive gameplan. They plan to use the unconventional set-up with at least some degree of regularity, and Grady will be at the center of its operation. Preparing against this doctrinal obscurity, against the multitalented Grady and the wealth of threats he poses is no overnight study. It requires specific gameplanning and repetitive simulation. If you haven’t practiced and installed a plan to counteract the Wildcat, chances are your defense is toast. What makes Vanderbilt’s alternate package all the more unsettling for opposing teams is that the Commodores’ conventional offense, which boasts talent and depth at every skill position, is difficult to prepare for in and of itself. Adding Grady and the Wildcat to the defensive preparation check list – that will cause a headache or three.