The past week saw Northwestern’s defense endure a torrent of criticism. Blasted for yielding 470 passing yards and 590 total yards offense to Syracuse, a projected middle-of-the-pack Big East opponent, Mike Hankwitz’s unit eluded most of the post-game plaudits heaped upon the offense for its 42-point outburst. Comparisons to last season – when NU ranked first in the Big Ten in passing offense and second in total offense, but fielded a defense that finished 11th in yards allowed and dead last against the pass – were readily and rightfully invoked. It was a familiar narrative for NU fans and players alike – a victory seized in spite (not because) of the defense, yet another offensive explosion nearly thrown to waste by defensive deficiencies. One week gone, one game, and already, the defense – everyone’s favorite punching bag – had given critics another rallying point to unleash their very worst. “Yeah they won, but did you see the defense?”; many an op-ed professed this very sentiment. 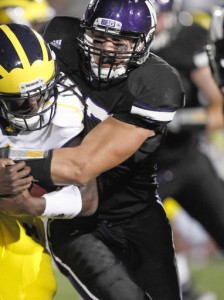 The defense stepped up against Vanderbilt with big performances from players like Scott (Photo courtesy Nuccio Dinuzzo/Chicago Tribune).

The script was flipped this week, reversed in wholly unexpected fashion. With Vanderbilt coming off an encouraging 17-13 home defeat to No. 9 South Carolina last Thursday, and more than a week to pick apart the Wildcats week 1 game tape,  the stage was set for another NU defensive debacle. It didn’t happen. NU held the surging Commodores to 217 passing yards and 318 yards of total offense in a 23-13 win, its second consecutive victory over Vanderbilt. This time, there was no blame game to be played on the defensive side of the ball, no measure of scorn to be directed at the group that one week ago left the Carrier Dome with questions looming over its long-term stability.

“We needed our offense to pick us up and we didn’t play well as a team a week ago,” Pat Fitzgerald said as he reflected on the contrast between his team’s first two games. “This week it was kind of in reverse. I thought our defense gave us a chance to stay in the ball game. The offense has to pick it up.”

Early on it seemed the issues plaguing NU’s defense last week had lingered into the home-opener. The Commodores burst out the gate with a 13-play, 77-yard touchdown drive, highlighted by a fourth-down conversion on NU’s 33-yard line and, just one play later, a 22-yard dart from quarterback Jordan Rodgers to wideout Jordan Matthews, who promptly glided into the end zone. A listless and altogether uninspiring effort from the defense, the Commodores had made light work of NU’s much-maligned unit. It may not have seemed like it at the time, but that early first-quarter touchdown strike marked Vanderbilt’s only successful endzone trip. The defensive line stifled Rodgers and the Commodores’ dangerous passing attack. Rodgers did find success on the ground, compiling 51 yards on 15 carries, but he never looked comfortable against NU’s aggressive front seven. The Wildcats supplied a constant dose of relentless pressure; the final line: three sacks, eight tackles for loss and three forced fumbles.

Junior Tyler Scott was in Rodgers’ face all night, but his biggest contribution came with just over two minutes remaining in the fourth quarter, the Wildcats holding on to a three-point lead, having just broken a 13-13 tie on Jeff Budzien’s 28-yd field goal. On the first play of Vanderbilt’s potential game-saving possession, Scott rushed around the edge to strip Rodgers. Not only was the possession-flipping play momentous in and of itself, it derailed the Commodores’ comeback before it had a chance to begin. The Commodores needed points, needed to generate offense in those two final minutes. Scott ensured those efforts fell short. “As a defense we weren’t done,” he said, smiling on the dais after its redeeming effort. “We wanted to go out there and get some pressure on Jordan [Rodgers] and cause him to throw the ball away or do something. It turned out even better.” Kain Colter sealed things on the next play, a time-killing sprint out play gone wrong in which Colter ran left, avoided a tackler, reversed field and, in one fell swoop, darted through a gaping hole across the field for a 29-yd touchdown.

The end result – a triumphant Colter, pointing to the sky in jubilation, victory firmly in tow – belied Fitzgerald and offensive coordinator Mick McCall’s mystifying quarterback management. Alternate (replacement, “1B”, or whatever moniker you choose) quarterback Trevor Siemian took over for Colter to start the fourth quarter. His two drives produced 10 points, but Colter was inserted to close out the game. One week after insisting Siemian was chosen to lead NU’s crucial final drive against Syracuse because of Colter’s injury suffered earlier in the game, he offered no such caveat for his selection this week. Fitzgerald is fully embracing a two-quarterback system, and he has no reservations about revealing his intentions.

“I think we have two very good quarterbacks,” he said, addressing his decision to use Siemian in the fourth quarter. “Both guys want to win, they want to help us in any way, shape or form. I think we have a really good situation.” 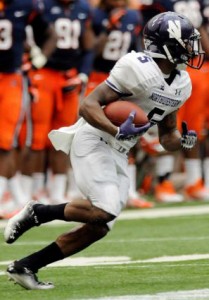 Two games, two quarterbacks. From the looks of it, quarterback controversy is an apt description. Not according to Fitzgerald, who answered the most puzzling quandary – whether Colter would remain the starting quarterback – with finality, as if he predicted the inquiry long before he produced a response. “Yeah, absolutely. I think if we would have caught the ball a little better in the first half, I doubt you would be asking me that question.” Indeed, Colter finished the first two quarters with an ugly stat line: two completions on seven attempts for 11 yards. The passing game, NU’s greatest offensive strength, didn’t truly take off until Siemian took over in the fourth quarter. When or how Fitzgerald splits snaps going forward remain open questions, but it’s clear Siemian and Colter will rotate in and out of games, at least for the time being. This is not a backup-starter scenario; Siemian is another quarterback.

There is no such controversy at the running back position. Venric Mark has emerged as NU’s most dynamic offensive player, and he proved it Saturday by submitting his second straight eye-popping performance. Rushing 23 times for 128 yards and a touchdown, Mark was the centerpiece of NU’s offensive plans. We knew he was fast, knew he could make plays on special teams, running back kicks, making defenders miss. What we didn’t know – or at least weren’t sure of – was whether Mark’s 5-8, 175 pound frame could endure the pounding of the tailback position. He’s answered those questions in resounding fashion. Mark found gaping holes on zone reads and pitch plays, zooming by defenders and bounding off tacklers, refusing to go down on first contact. Simply put, Mark makes the Wildcats dangerous. A versatile, stealthy scatback, the junior is lethal not only when used in conventional run plays, but on short passes, jet sweeps and other backfield running iterations. And for the second week in a row, he performance represented the deciding factor in NU’s victory.

“I’m glad that I have a bigger role, but we haven’t reached our destination yet,” concluded Mark, shifting the focus not on his performance, but on his team’s mission this season. “We’re only two games in and we need to finish out.”

So on a day that saw the Big Ten conference absorb an absolute drubbing in the second week of nonleague play – Nebraska lost to UCLA, Penn St. lost to Virginia, Iowa lost to Iowa St., Wisconsin lost to Oregon St., Purdue lost to Notre Dame and Illinois lost to Arizona State – the Wildcats stood tall against an SEC foe. It was an important win for NU, a strong pushback against the criticism surrounding last week’s squeak-by at Syracuse. Facing probably its toughest nonconference opponent, in its home opener, no less, the Wildcats rose to the occasion. Still, Fitzgerald is reluctant to crown his team just two weeks into the season. The Big Ten may have struggled Saturday, but an early-season win over Vanderbilt doesn’t make NU flagbearers of the land of Legends and Leaders.

“We’re focused on what we need to do,” Fitzgerald said. “We’re not a good enough football team to put the league on our shoulders.”