Northwestern got its first Big Ten win Thursday night, with a 70-54 drubbing of Penn State in Happy Valley. The Nittany Lions are arguably the worst team in the conference, so it's not an overly impressive win, but NU needed this confidence-booster after two straight blowouts, and it got its freshmen even more experience. Here are our three thoughts from the game and check out the box score, as well.

Can Jared Swopshire and Dave Sobolewski keep this up against better competition?

In an unlikely turn of events, Dave Sobolewski and Jared Swopshire were Northwestern's scoring leaders, with 18 and 17 points, respectively. It was a breakout game of sorts for Swopshire and a return to form for Sobolewski, who has struggled to score as of late. The question is whether they can keep it up. When Swopshire came in this year, he expected to take on Shurna's role as one of the team's offensive leaders. He's never been as good of a scorer as Shurna, but Carmody raved about his ability to get to the rim and rebound. However, Swopshire has been far too passive on offense this year, and an assertive game like this is exactly what NU needed out of him.

Sobolewski started the season off hot, but lately he has had trouble scoring against top competition, with just one point against Stanford, seven against Michigan and 10 against Minnesota. Contrast that from early in the year when he had 14, 13 and 21 against Maryland, Baylor and Butler, respectively. Penn State isn't exactly top competition, but this was a good way for him to start building back up to how he was shooting earlier in the year. NU certainly needs to find scorers, so maybe Sobolewski can step up in that regard. However, scoring against Penn State is different than scoring against most of the Big Ten. Can Swopshire and Sobolewski keep it up? Sunday's game against Iowa will be a good test.

Tre Demps has shown his scoring ability throughout the season and he may be the most dynamic scorer Northwestern has. However, he's been fairly inconsistent and has tended to only step up big when the game is no longer in doubt. Demps hasn't played as much over the past few games, which is strange, considering he's one of the team's best shooters and NU will need good shooters on the floor if it continues to slow things down on offense. Against Penn State, Demps had just five points in 16 minutes of playing time.

You never really know what you're going to get with Demps, which is an issue for a team that needs consistency right now. Fans want to see him out on the court, but he must do more than be a dynamic shooter. He has yet to become a proven player on defense and he tends to shoot early in the shot clock, which isn't good for an offense that typically likes getting set and making the extra pass. For reference, Demps shoots the ball on nearly 32 percent of possessions when he touches the ball. Drew Crawford was at 28 percent before his injury, but nobody else on the team is above 22.6 percent in that statistic. NU could certainly use Demps on the floor, but until he becomes more situated in the offense, his minutes may not be where most fans want them to be.

Bill Carmody is sick of talking about youth — that's what he said when he met the media on Wednesday. And really, who can blame him? These freshmen already have roughly half a year of college basketball under their belt, and as Carmody pointed out, Sobolewski had to deal with a very quick learning curve last year. However, with a team that has a lot of freshmen, getting those young guys experience will always be a key so they can keep building throughout the season. Thursday's game was a good indicator of the ups and downs the freshmen will face.

Alex Olah struggled, scoring just two points — that's troubling against an awful Penn State frontcourt — but that's to be expected with freshmen, and even though the learning curve is taking a little bit longer than Carmody would like, it shows that there is still a lot of room to grow. Olah has had some great games, but he's also going to have some bad ones. However, it's encouraging that NU could still win when he was off, and given his continued upward progression, don't expect performances like this to be the norm. Abrahamson, meanwhile, had a nice game offensively. He still needs to improve on defense, as Carmody keeps saying, but he's getting more and more comfortable, and it's showing. These freshmen are going to be very good, and they've all shown bright spots this year, but it's going to be tough to get consistent performances from them this year. That's all part of the learning experience, even if Carmody would like to speed that process up a little bit.

Penn State doesn't have much to brag about when it comes to basketball, so some bros at the game yesterday decided to make this sign instead, making fun of Northwestern's name and location. It would be a clever "gotcha" sign, until you realize that Northwestern got its name because it was founded to serve the Northwestern territories, which, at the time, included Illinois and Wisconsin. Nonetheless, it's probably my favorite sign that I've seen at an NU basketball game this year. 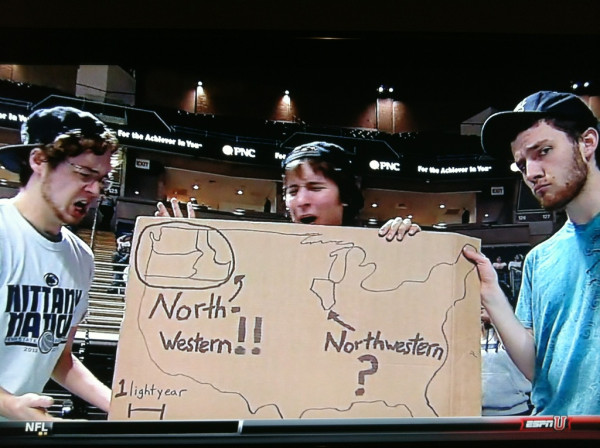 The outline of the country isn't bad, but then there's the outline of Illinois, which looks like... that. Also, they made an arbitrary measurement for a light year, which I don't understand at all, but by their calculations, it looks like NU is about two-and-a-half light years away from the Northwest. So great job, PSU bros! Please continue to entertain us. At least it's better than last year, when they apparently tried to harass Sobolewski about his mom working for Beanie Babies. Hey, if you can't win the game, you might as well have fun.