Breaking Down Northwestern's Success with the 1-3-1 Against Minnesota

Share All sharing options for: Breaking Down Northwestern's Success with the 1-3-1 Against Minnesota

Anyone following Northwestern basketball during the Bill Carmody era has heard about a defense called the 1-3-1. Some fans loathe it because some fans seem to loathe everything Carmody does (see: Offense, Princeton), but it's a very effective defense when played well, and when NU breaks it out in the middle of games it can baffle teams, since really the only time they see it is when they come to Evanston.

Such was the case for Indiana and Minnesota. Northwestern crawled back within four after a large deficit against Indiana thanks in large part to the 1-3-1, and it was even more effective against the Gophers, turning a 7-point deficit with 15:25 left in the game into a 9-point lead and eventual win.

So what is the 1-3-1 and what makes it so effective? We'll run through the formation quickly and explain why this team, in particular, may be one of Carmody's best-suited to run it.

As the name suggests, the 1-3-1 utilizes one player at the top, three across the middle (two on the perimeter, one in the middle of the floor) and one at the bottom. Obviously, Northwestern rotates players in this set, but it uses the same recipe for deciding which personnel to use. In the base set, NU had Alex Marcotullio at the top, Reggie Hearn, Alex Olah and Jared Swopshire across the middle (with Olah in the center) and Dave Sobolewski at the bottom. Sobolewski has been a staple at the bottom of the zone side last year, while Alex Marcotullio and JerShon Cobb (and now Tre Demps) have been Carmody's go-to guy at the top. The center stays in the middle, while the "3" and the "4" play on the wings. So here's NU in its base set.

Northwestern's main objectives in the 1-3-1 are to keep the ball on the perimeter, force tough shots and force turnovers. Once everyone gets down the floor, Minnesota point guard Andre Hollins will look to break the 1-3-1 by going inside. However, NU will zero in on anyone inside, hoping to force an outside pass. At the very least, Minnesota will look to get the ball to the corners, where it can presumably find someone open for three. However, the Wildcats' constant movement and pressure made it difficult for the Gophers to do so, and especially in early possessions, NU had great success keeping the ball at the top of the key and on the wings. Even on the rare occasions Minnesota got the ball to the corners, the Gophers couldn't knock down their shots. Let's run through some scenarios.

Scenario 1: Keeping it on the perimeter

For this scenario, we'll look at Minnesota's first possession, and also get a visual of what the Gophers are trying to do with the ball and how Northwestern's pressure disrupts that. So here's Northwestern in the base set again. As you can see, Swopshire has sunk down to essentially give NU a 3-on-2 down low. That takes care of one player by default and passing to the other player down low would be risky because Hearn, Olah and Sobolewski can close off that passing lane. At the very worst, NU already has three guys down there to swarm to the ball if the pass gets through. 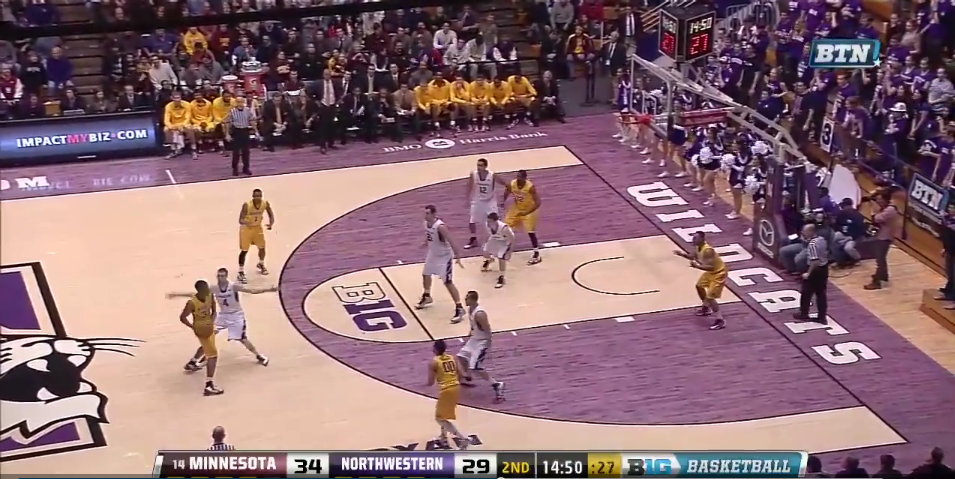 Hollins opts to avoid the risky pass and pass it around the perimeter. After a couple uncontested passes back and forth, Minnesota eventually gets the ball on the wing to Hollins' left. That's where NU first goes for the trap. Minnesota ends up with the ball on the wing and, in this case, Swopshire and Sobolewski are pressuring. If the ball were higher up the wing, then it would be Marcotullio and Swopshire brining the pressure. In any case, the pressure leaves the Gophers struggling to find an opening inside, since all the passing lanes are closed. Even if Minnesota could work it inside, NU has enough bodies in the area to contest the shot.

With the inside closed off, Minnesota gets impatient. The logical move here would be to pass it back up to the unguarded point guard, set up the offense again and try to find an opening inside. However, Minnesota goes for the home run and passes all the way across the court. This is an ill-advised pass all the time, but especially when you have two men in your face and you're passing it over about five people, two of whom are big men. 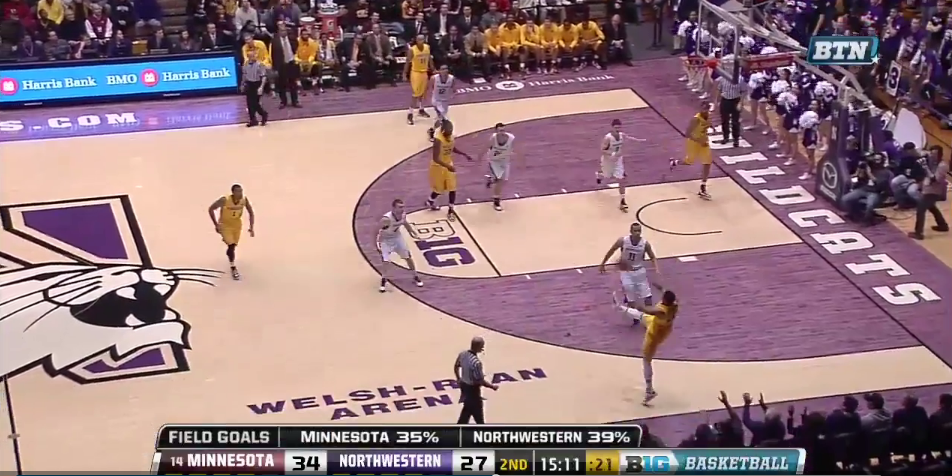 As expected, it's a bad pass and Minnesota can't handle it, eventually leading to a steal for Marcotullio and a fast-break opportunity. Northwestern doesn't typically get out in transition, but these turnovers at the top of the 1-3-1 allow NU to get on the break. This leads to easy buckets and/or forcing the other team to commit dumb fouls out of desperation (as was the case with one of Minnesota's best shooters, Austin Hollins, who fouled out). 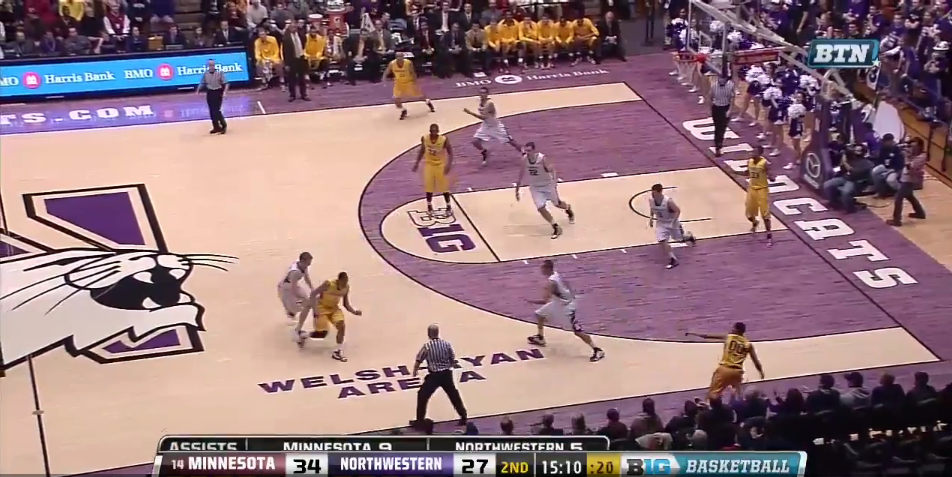 Even when there isn't a turnover, Northwestern was extremely successful in keeping the ball on the perimeter. Minnesota doesn't have great shooters, and it was down one of its few good shooters once Austin Hollins fouled out. The Gophers rely on second-chance points and high-percentage shots, but NU made them settle for threes. That's a recipe for an upset: force a cold-shooting power to keep taking low-percentage shots.

Scenario 2: When the ball gets inside

Obviously, sometimes Minnesota is going to be able to get the ball inside, either by penetrating with a drive or by passing it in. However, the 1-3-1 helps NU defend inside after the shot, as well. The Gophers are one of the best offensive rebounding teams in the country and put on a clinic in the first half in that regard. Basically, whenever Trevor Mbakwe went up for a rebound against Alex Olah, Mbakwe was going to come down with it. However, the 1-3-1 allows all five players to crash the boards. As you can see here, Northwestern has five guys that can potentially grab the rebound, and although Mbakwe has gotten position inside on Olah, NU is playing 5-on-4 for the rebound, which are better odds than Olah-on-Mbakwe, one-on-one. In this case, the bounce goes NU's way and Swopshire grabs the rebound.

Even in the 1-3-1, the Wildcats won't out-rebound a lot of people, but it's a tremendous equalizer and the turnovers forced at the top of the zone help cut down on the number of extra possessions the opponent gets. That's a big plus against anyone, but especially against a team like Minnesota, which lives off second chance opportunities. NU limited those opportunities in the second half and capitalized on Minnesota's misses in the first half. In fact, the Wildcats won the second chance points battle 12-10.

The obvious reason NU has to play the 1-3-1 at times is rebounding. This team is really going to struggle to rebound in man-to-man against elite competition, and that's been evident the last two games, as the centers have combined for just three boards in those games. The 1-3-1 neutralizes the one-on-one matchups with the centers to an extent and typically gives the Wildcats numbers inside. It also puts players like Swopshire — NU's leading rebounder — in position to make athletic plays for a rebound. Olah, in particular, struggled to compete for rebounds in man-to-man, but he was more disruptive inside in the 1-3-1, giving NU a big body to help distract from Swopshire, who did most of the rebounding work.

But it's not just the centers. NU's current personnel is much better fit to run the 1-3-1 than most other defenses. Marcotullio and Swopshire, especially, are very well-suited to run the 1-3-1. Marcotullio has taken some heat for his defense in the past, mainly because he has trouble sticking with his man on the drive. However, he's a very good on-ball defender, and his pressure has led to some catalyzing steals this year. In the 1-3-1, he doesn't need to worry about defending the drive and can focus on pressuring the ball-handler, which makes him much more effective.

Swopshire, meanwhile, fits the perfect mold of the "4" playing on the wing of the 1-3-1. He's undersized to be a typical power forward, so even though he's been solid as a rebounder and pressure defender, he's often physically overmatched when matching up against another team's power forward. However, he's outstanding at applying pressure on the wing and utilizing the trap. Since he's tall and lanky, it's tough for opposing guards to get the ball around him, which leads to a lot of turnovers.

The 1-3-1 will always work well in that its an obscure defense that's tough to prepare for. However, it works extremely well with this NU team because of the personnel that the Wildcats have. In many ways, Minnesota looked like a terrible matchup for NU — a team that crashes the offensive boards and has a terrific frontcourt. However, once NU neutralized the offensive rebounding issue to an extent, the Wildcats were actually a terrible matchup for the Gophers. The 1-3-1 works well against teams that shoot inconsistently from three and turn the ball over a lot, and that's exactly what Minnesota was, especially once Austin Hollins went out.

NU fans may gripe about the 1-3-1 from time to time, but this year, it looks like NU's best defensive weapon, especially against teams like Minnesota that are stacked in the frontcourt. It's a catalyst for transition offense, as well, and when NU brings it out in the second half of games, it can stifle opponents and keep the Wildcats in games when they're seemingly overmatched. Minnesota learned that the hard way Wednesday night.