Breaking Down the Tape: Analyzing the Progression of Alex Olah Against Michigan

Share All sharing options for: Breaking Down the Tape: Analyzing the Progression of Alex Olah Against Michigan

Someone got to InsideNU.com Wednesday night by searching “is Alex Olah NBA.” It’s tough to decipher what exactly the reader was looking for, but most likely, they were wondering whether Alex Olah can be an NBA prospect. Of course, 7-footers are very over-valued in the NBA Draft — we live in a world where Meyers Leonard was taken No. 11 overall.

But Olah is far from being an NBA prospect. He has struggled to use his size to his advantage, both on the offensive and defensive ends, and has yet to prove himself as a good rebounder or a solid scorer from anywhere on the floor. However, Wednesday's game against Michigan was by far Olah's best game of the Big Ten season to date. He had 10 points and just 3 rebounds, but was much more active on the court and showed signs of the promise many fans hoped to see when he arrived at school.

Today, we'll look at Olah's offensive game  — his jump shot, the pick-and-roll and his post-up game — and show you what went well and what didn't go so well against Michigan. There is still a lot for him to learn, but Wednesday's game showed much more promise than we've seen in a long time and possibly a glimpse of what we'll see in the future.

In the Princeton Offense, everybody has to be able to shoot the ball, including the center. This isn't to say Olah needs to be shooting threes — he actually does that too often and coach Bill Carmody cringes every time — but he needs to be able to hit mid-range jumpers. The Princeton Offense is designed around backdoor cuts to the basket, and the center spends more time around the free throw line than in most offenses, opening up lanes to the hoop.

The problem for Northwestern's offense in the past few years is that the big men haven't been effective and haven't proven that they can shoot mid-range jumpers. This allows teams to play off the center in favor of hanging underneath the basket to close off those backdoor passing lanes. Last year, teams would give center Luka Mirkovic wide open shots from the elbow, knowing that he wouldn't have the confidence to shoot there.

Olah has done a little better job of commanding respect from the mid-range jumpers, and he says he is confident with that shot. However, he must continue to build up confidence there and force teams to guard him from that distance. He has passed up shots in the past that were good looks for someone confident in shooting in that area of the court.

Michigan actually defended Olah pretty aggressively, and the Wolverines were able to limit NU on offense by all-around solid, disciplined defense. However, here's an example of where Olah took a mid-range jumper that he absolutely has to be confident taking in the Wildcats' offense. Here, Jon Horford is guarding Olah, and while he had been playing him relatively tight all night, this time he sags down to play help defense and defend against Jared Swopshire on the drive.

Swopshire realized he was double-teamed, and since Horford followed, he passed it out to Olah, who was wide open a little bit above the elbow. Tim Hardaway Jr. tried to come over and help, but he's late. That's the shot that Olah has to be comfortable taking, and that time, he hit it. If he can hit enough of those, he'll command respect from opposing defenses, which will open up cuts inside.

The pick and roll is probably the best part of Olah's game at this point. In fact, he's done a good job of getting open down low. The problem is finishing at the hoop. We'll show you a couple sequences to illustrate his successes and his troubles. In this first picture, Olah has already passed the ball off to Hearn and goes to set a pick on Hardaway Jr.

Olah sets the pick on Hardaway Jr. and Horford, who was guarding Olah, stays put to help defend Hearn. Olah then rolls down into the lane.

Olah does a good job of getting open, but Hearn is presumably hesitant of getting the ball to Olah with Nic Stauskas in position to potentially strip the ball or steal the pass. Instead he opts to pass it off to Demps. At this point, Demps shoots, but should probably pass the ball off to a wide open Olah down low. The good news for Northwestern: Olah was actively calling for the ball down low, as he was all game, and he was as assertive as we've seen yet.

There were a number of other plays like this, so we'll fast forward to the end of another sequence when Olah actually gets the ball down low. He gets the ball in this position a lot, sometimes off the pick and roll and sometimes not. Olah isn't that bad at moving off the ball, but at times he struggles with awareness with the ball in his hands. That is evident here.

Olah gets the ball down low and attempts to lay the ball in. He's had trouble with his ball handling at times in this scenario, but this time he does a good job keeping a strong dribble and works his way toward the basket. He's primarily concerned with Glenn Robinson III, who is directly behind him, and Hardaway Jr., who is guarding against a pass off to Swopshire.

Olah is blocked far too often by smaller players because his play is too predictable. This time, though, he uses a nice pump fake to get Robinson III out of position for the block. This looks like an easy lay-in, but Olah doesn't take into account Horford, who has come in from behind to help. 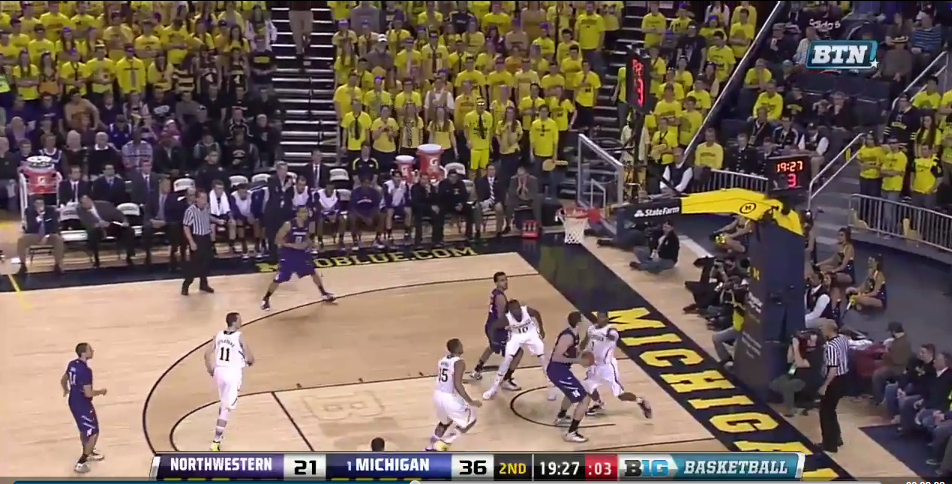 The result is a block for Horford. Olah actually ended up catching the ball off the backboard and laid it in, but that's obviously not the way NU wanted to get those points. 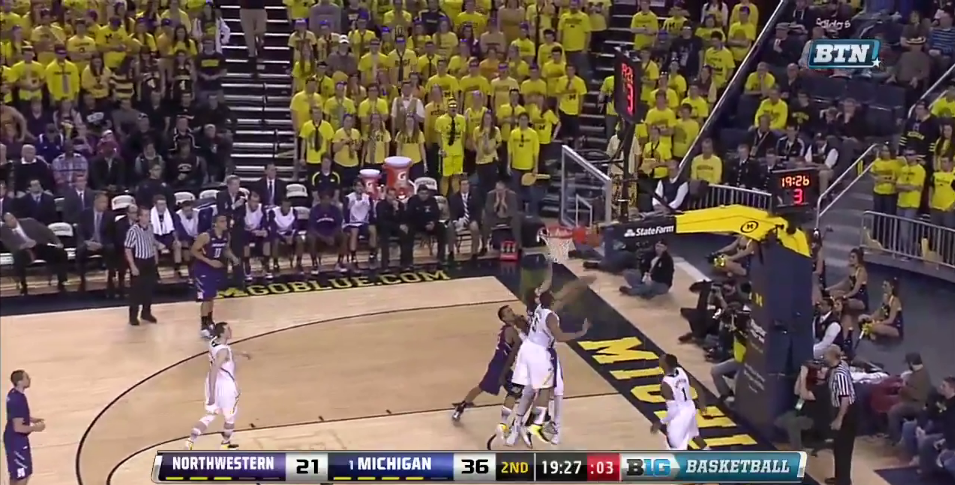 In this case Olah 1) has to be more aware of his surroundings and 2) should probably just dunk the ball. Had Horford not come in to help, a lay-in would have worked fine. However, with someone contesting the shot, Olah needs to be aggressive and go for the dunk. In that instance, the three most likely options are a) the ball goes in, b) a foul or c) both. There are a lot of parts of Olah's game that will improve, but being aggressive at the rim and dunking the ball is the easiest change he can make. It will make a major difference in how he finishes in these plays down low.

This is the final part of Olah's game that we'll examine. Olah has struggled to use his size to his advantage down low and has struggled with his post-up moves. This time, however, he does a good job against Horford. In this instance, Olah gets the ball down low and before this scene, he actually knocked Horford off of him a little bit. This is the type of matchup where Olah can use his size to excel — he's 7-feet, 275 pounds, while Horford is 6-foot-10, 250 pounds. After knocking Horford off of him, Olah makes a strong dribble toward the basket.

After making his move, Olah goes up strong against Horford, gets position and draws the foul. It's not two points, but getting to the line is still a solid outcome. This kind of move is what Olah has been missing from his post-up game, and we saw a glimpse of his potential Wednesday night.

There are still some issues with Olah's execution on this play. He didn't take a great angle toward the basket, for one, but that awareness will come in time. The important part is that Olah was effective in making his move and using his size to his advantage, drawing the foul on Horford.

"That's a tough one to go against you if you're Horford," BTN analyst Shon Morris said. "He did a pretty good job of moving his feet."

That'e exactly the point. Olah will be bigger than a lot of the players he faces, so if he gets position, he will typically make the shot or draw the could. Sometimes the opponent will get a block, but in this scenario, it's tough for Horford to do anything besides foul to contest the shot. Olah can't miss lay-ins if he isn't fouled, but that will come in time, as well. This sequence should give hope to NU fans — Olah certainly has the abilities to be an effective Big Ten center. Now the question is how long it takes for him to develop.

There are other flaws to Olah's game that we haven't gone over. He needs to do a better job of holding onto rebounds and he needs to be more aggressive when going up for those rebounds. He's not all that athletic and he struggles to defend quicker forwards down low.

However, there are more positives to Olah's game than people are giving him credit for, and we saw some of those positives on display Wednesday night. Now comes the questions of consistency and development: can Olah keep this up and how long before he develops into what his potential shows? It's tough to answer those questions, but it's evident that the development will happen eventually. Most big men take awhile to develop, and even if Olah takes longer to develop than others, it will be well worth it in the end for NU.

Saturday, a new challenge for Olah comes to Welsh-Ryan Arena, this time in the form of 7-foot, 280-pound freshman center AJ Hammons. Hammons is still developing, but he dropped 30 points against Indiana and is starting to show the star potential that many saw in him coming out of high school. This is a different challenge than Michigan. Olah proved he could have some success against the Wolverines' smaller frontcourt, but now he'll be tested against someone just as big as him.

This could be a coming out party for Olah. It could also be a disaster. More than likely, it will be something in between — we'll continue to see some splashes of potential, but there will also be freshman moments. Whatever happens on Saturday, don't write off Olah's future. Eventually, those splashes of potential will develop into a solid play worthy of a Big Ten-caliber center.