Share All sharing options for: The Four Biggest Preseason Questions for Northwestern Basketball

Although we are in the swing of football season with Ohio State coming to town this weekend, let us not forget that the college basketball season is approaching quickly. On Oct. 5, just hours before the football game,  Northwestern will host an intra-squad scrimmage at 3:15 pm in Welsh-Ryan Arena. In anticipation of that and the fact that if we put out any more coverage of Ohio State-Northwestern people's heads may explode, here are four burning questions regarding Northwestern basketball heading into year one of the Chris Collins era:

How will Chris Collins’ new offense mesh with the current personnel?

Throughout Bill Carmody’s tenure at Northwestern, broadcasters always commented on how “Northwestern tries to grind you” and that when a team went up against Northwestern, it was a “war of attrition.” Those clichés, although somewhat overstated, weren’t entirely false. Carmody’s teams ran the Princeton offense, one that is notorious for it’s slow pace and constant movement. It’s a give-and-take type of system where a premium is put on off-ball screens and back-door cuts. In essence, the Carmody’s offense was about getting opponents to over-commit to taking away a certain aspect of Northwestern’s offense, only to have it backfire on them later through outside shooting or cuts toward the rim. Like any coach, Carmody recruited to fit his system. For example, former-Wildcat John Shurna starred in the Princeton offense as a deadly long-range shooter that could also see over the top of defenses. New head coach Chris Collins inherits a team used to running the Princeton style, yet the new coach wants to run a more motion-based offense. 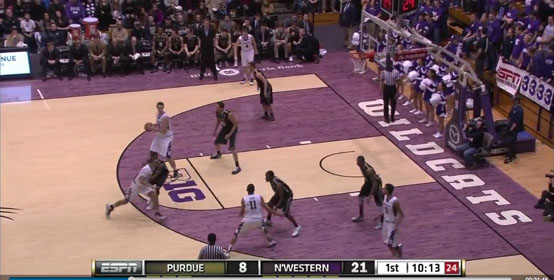 Here is a common set from Carmody's offense. Notice how all five players are within a step or two from the three-point line. This opens up the lane for cutters. In Collins' motion-based offense, there will be more space for creativity and isolations. Instead of having five players roaming the perimeter, expect Northwestern to utilize the slashing abilities of JerShon Cobb and Drew Crawford.

According to KenPom, Northwestern scored 37.4 percent of their points on three-pointers, good for the eighth highest mark in the country last season. Obviously, that is a remarkably inefficient way to score and Collins hopes to trade some threes for fast break layups. We won’t know exactly what type of offense Collins will run until either the intra-squard scrimmage on Oct. 5 or the first game on Nov. 6 (depending on what he decides to show in terms of game-like sets). What we do know is that he plans to allow more room for improvisation and isolation. "On offense it's just a different style. More ball screens, spacing the floor. We even put in a bit of transition game, too,” senior Drew Crawford said in an ESPN.com article about Collins by Eamonn Brennan. Crawford, who has demonstrated the ability to attack the rim in the half-court and transition games, should shoulder most of the scoring burden for the Wildcats on offense. A more fast-paced style should allow point guard Dave Sobolewski to dictate play and find open-shooters earlier in the shot clock. Overall, there should be a marketable difference in pace between the Collins and Carmody offenses, but don’t expect to see the Wildcats completely adopt a breakneck tempo this season. At some point Collins’ teams could be among the fastest in the Big Ten, but with this current group, picking spots to speed-up the game will be key.

Will Drew Crawford become a star in the Big Ten?

Ever since his 35-point outburst against North Carolina A&T just eight games into his collegiate career, the potential for Drew Crawford’s stardom seemed inevitable. Crawford finished his freshman season as the first Big Ten Freshman of the Year in Northwestern basketball history. In his sophomore year, Crawford increased his scoring from 10 points per game to 12.1 while still billed as the third option behind John Shurna and Michael “Juice” Thompson. After Thompson’s departure, Crawford became more of a primary scorer along side Shurna in his junior year. That season, Crawford averaged 16.1 points per game on over 48 percent shooting and was named a third-team All-Big Ten selection. Going in to what was supposed to be his senior year, Crawford was expected to carry the scoring load for the Wildcats, while matching up with some of the best wings in the country in Indiana’s Victor Oladipo, Michigan’s Tim Hardaway Jr., Michigan State’s Gary Harris and Illinois’ Brandon Paul. But after opting for season-ending shoulder surgery to repair a torn labrum in December, Crawford was granted a medical redshirt. After Northwestern fired Bill Carmody, Crawford had the option of leaving Northwestern for his final season, but elected to stay. Now in his fifth year, Crawford can begin where he left off.

This shot chart, from Creighton's 87-79 win over Northwestern on Dec. 22, 2011 showcases Drew Crawford's ability to score in different ways. Crawford finished the game with 34 points. The most impressive thing about this shot chart—aside from the lack of misses—is its diversity. Crawford showcases his ability to attack the hole and finish (7-7 on dunks/layups) while also being able to step back and knock down threes. (Shot chart courtesy CBSSports.com)

As discussed earlier, Chris Collins’ offense will be more reliant on dribble-drives than Carmody’s was, allowing Crawford to use his ability to attack the rim more freely. The emphases on ball-screens and the transition game will surely play to Crawford’s strengths, as his willingness to get out on fast breaks won’t be held back. This year, a useful addition to Crawford's offensive prowess would be a post-up game. If matched up with a smaller player, Crawford could use his strength and athleticism to operate on the low block. His high basketball IQ would allow Collins to run the offense through Crawford at the post, creating mismatches and putting defenders in awkward positions. If Crawford can continue to improve his dynamic offensive game, he could end up being one of the most feared scorers in the Big Ten. There is no doubt that Crawford will be asked to do a lot for the Wildcats this season—maybe even too much—but there’s nothing to say he isn’t up for the challenge.

What can be expected of JerShon Cobb?

After being suspended for the entire 2012-2013 season last September due to academic-related issues, JerShon Cobb returns to the Wildcats as a largely unknown commodity. When healthy (Cobb missed 12 games during the 2011-2012 season), the guard has shown glimpses of superb athleticism and a nice shooting stroke, but it is yet to be seen how Cobb will fit into Collins’ offense. But regardless of how the new offense suits Cobb, his ability to defend should always be present. The 6-foot-5 Cobb, along with Drew Crawford, can match up athletically with any wing combo in the Big Ten, especially on the defensive end.

Cobb scored a career-high 24 points on 8-12 shooting, grabbed eight rebounds and recorded two steals against Minnesota in the 2012 Big Ten Tournament. With John Shurna (7-16 from the field) and Drew Crawford (2-11) off their games, Cobb showcased his ability to lead a team on offense. This highlight, specifically, showcases Cobb's anticipation skills on defense, jump shot and athleticism.

The best-case scenario for Cobb on the offensive side of the ball is for him to develop into a solid second scoring option behind Crawford. To be honest, there’s really nothing thats says he won’t be that number two option. His ability to break defenders down off the dribble and attack the rim will be pivotal. When Cobb is able to attack one-on-one, it forces the defense  to leave shooters open on the perimeter, creating mismatches. Playing a more up-tempo style should allow Cobb to utilize his athletic ability in transition more than he would have been able to under Carmody. As I look through the roster, it’s hard not to pin Cobb as the “hinge” player; a guy whose play will most directly point to the direction the team is headed. If Cobb buys in to Collins’ system, using his ability to finish and improved outside shot to keep defenses honest, Northwestern will undoubtedly turn some heads in the Big Ten. But if he gets hurt or doesn’t adjust to Collins’ style, Northwestern will struggle to find ways to score beyond relying on Crawford.

How will Alex Olah progress in his sophomore season?

Out of all the returning contributors from last season’s team, center Alex Olah may come in to the 2013-2014 campaign with the biggest question marks as far as his role in the offense is concerned. As a freshman under Carmody, Olah’s position was as defined as anyone’s: set solid off-ball screens, catch the ball at the high post and look for cutters diving toward the rim. The seven-foot-tall Olah struggled with those responsibilities early in the season, but by the midway point in Big Ten play it was clear that the big Romanian was getting the hang of the offense. He exemplified superb passing skills and soft hands. As Northwestern’s only big man with any major college playing experience, Collins will probably use a lot of motion sets with Olah posting up on the block with the option to set a ball screen. But Collins has yet to see much of his center because he opted to play in the FIBA U20 European Championships for Romania. While his team played in the B division and went 3-6, Olah led Romania in points (16.8 per game) and rebounds (9.1 per game), including an 18-point, 22-rebound performance in a win over Luxembourg. His individual success in Europe builds on the confidence he gained late last season.

Olah showed the ability to catch and finish in a little bit of traffic toward the end of last season after adjusting to the physical play of the Big Ten. Here, the big man sets a nice screen on the wing before rolling hard to the basket, catching a low pass and finishing with two hands.

Olah’s play around the basket on both ends of the floor—rebounding, finishing and rim protection—will be essential for Northwestern. With the Princeton offense and 1-3-1 zone Carmody liked to run, a team like Northwestern could get away without having any semblance of an inside player. In Collins’ offensive and defensive schemes, Olah could prove to be indispensable.