NO SERIOUSLY THEY'RE SETTING UP THE SET GAMEDAY IS HERE, and Fitz is greater than Michael Jordan.

I'm writing a bunch of stuff that kept me up through the night, so since it's 6:43 a.m., which means I'm currently watching Mike and Mike broadcast from Deering Meadow in near-complete darkness. It looks miserable: 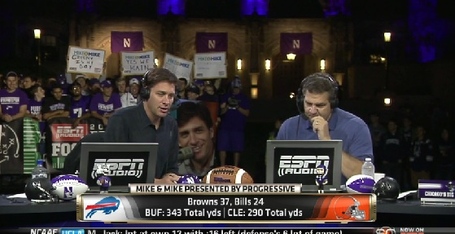 Seriously: I'ma devoted fan, but "hey let's wake up at 5 a.m. and listen to Mike and Mike talk about Josh Freeman" is absolutely a non-starter to me.

But it's gotten progressively more and more crowded behind the Mikes as I've watched. That's a real, real good sign for Northwestern looking purple rather than red on College GameDay. Get there early and often, folks.

It's been tough this week to keep up with the dozens and dozens of awesome articles written about Northwestern. Tough, you know, but awesome. However, let's curate the best thing:

And the GameDay setup, on the part of the Lakefront just below Lakeside Field YES THAT'S RIGHT IT'S GAMEDILLODAY

GAMEDILLODAY! Looks like it's facing south, for optimal prettiness.

GameDay has also brought on support from around the Chicago area!

What a huge insult. Pat Fitzgerald won two championships in four seasons as a player. Michael Jordan played 15 years and won ONLY six championships. And MJ's been an abject failure in his post-athletic career, drafting terribly for the Wizards and guiding the Bobcats through mediocrity, while Pat Fitzgerald has led Northwestern to wins and stuff. Pat Fitzgerald is significantly better than Michael Jordan, and probably would have beaten the Monstars handily if given the opportunity.

YEAHHHHHH. Northwestern has made a mockup of this scenario -- Chicago's skyline with Northwestern stuff around -- a billion times but I never thought it would actually happen, which, you have to admit, it kind of did. Chicago's Big Ten Team and all.

Couldn't we light up the ferris wheel or something