On being in New York for Ohio State-Northwestern, the game that could change Wildcats football

Northwestern-Ohio State could be the game that changes Northwestern's program permanently. And I won't be there. SO CHEER, YOU JERKFACES.

Share All sharing options for: On being in New York for Ohio State-Northwestern, the game that could change Wildcats football

I made a really bad decision.

I work weekends in the fall, because that's when sports happen, and I write about sports. After four years of attending every Northwestern home game, and last year going back to school for my first homecoming, I decided this year I'd spend my weekends in the office, working, instead of flying back to Chicago for a game.

"One team might lose," I said. "The tickets are way more expensive than most Northwestern games," I said. "You went back for a game last year and again to drink with people in June, and at this point you probably just seem desperate," I said. "Oh, for sure, you won't regret this."

I'M REGRETTING THE HELL OUT OF IT. As Bill Connelly explained, Northwestern won their first four games, looking spectacular for 1.5 games and sorta mediocre for the last 2.5 but ending up with four double-digit wins. Ohio State is Ohio State, and, yes, GameDay is comin', for the first time in Evanston since 1995.

And I'll be here in New York, jittery.

The reason I feel incredibly stupid isn't because I'm missing a football game. I've seen plenty of those. It's not because I'm missing the opportunity to stand in the background while Lee Corso talks about football, which I did in 2010 when Northwestern played a game at Wrigley Field. That was pretty mediocre. It's not even because I expect Northwestern to win. I don't, necessarily -- I just think they could.

I'm disappointed because Saturday has the potential to be a program-changing day for Northwestern, and even people who aren't Northwestern fans or hyperbole machines have to agree with me.

Nearly everything about Northwestern football is objectively operating at the highest level its operated in the history of the school.

As of this season, Northwestern has the highest season ticket base in program history. The Wildcats' 2014 recruiting class is generally considered the best the team has ever landed, and there are still two spots left. And with two more wins, the team will secure bowl eligibility for a seventh straight year, coming off only the third 10-win season in over 130 years of football. He hasn't won a Big Ten Championship like his predecessors Randy Walker and Gary Barnett did, but four games into his eighth year, Pat Fitzgerald has won more games than any Northwestern coach ever.

But "the best in Northwestern history" is still in many regards second-rate.

That season-ticket base? Good enough for an average attendance of 34,629, still 13,000 short of filling a 47,000-seat stadium that's the smallest in the Big Ten. In fact, despite the record figures, this is the first year Northwestern has utilized a tarp to cover up empty seats, the ultimate sign of a program with attendance issues. 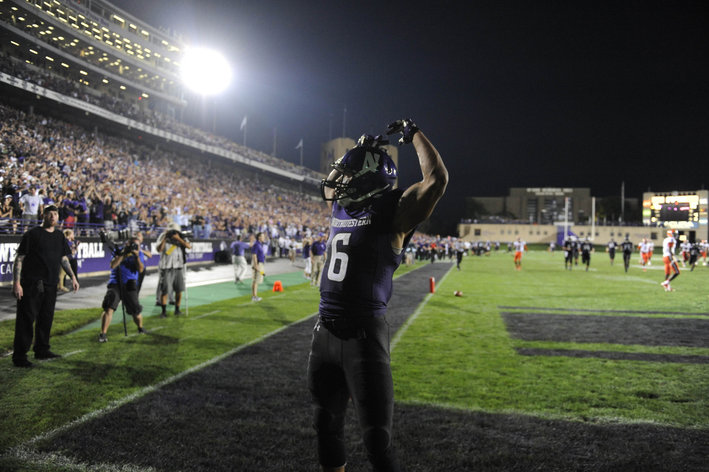 Our full coverage of the Northwestern game of the century of the millennium of the week, from actual analysis to GameDay tomfoolery

The football team? Good, but solid underdogs to Ohio State The never-before-seen wave excitement about this program is about a team that may or may not win the dismal Big Ten Legends division.

The Wildcats have gone from a cellar-dweller to a team perennially good enough that you're not surprised that they have a winning record, but the program isn't yet at the level where people consider them a legitimate contender.

Fans of other team love to loft dull praise Northwestern's way -- "wow, Pat Fitzgerald has really put together a solid team, considering the program" "hey, Northwestern isn't a bad team this year!" -- but when opposing fans are friendly and courteous about your team, it means there's no fear there. Northwestern eternally gets the "good for you guys!" vote, and never the concern from people generally worried about getting whooped. It's still cute that they're good.

And its not like they've given elite opponents reason to feel otherwise. In the 20 years since rising up from decades of defeat, Northwestern doesn't have a win over an AP Top 5 team. 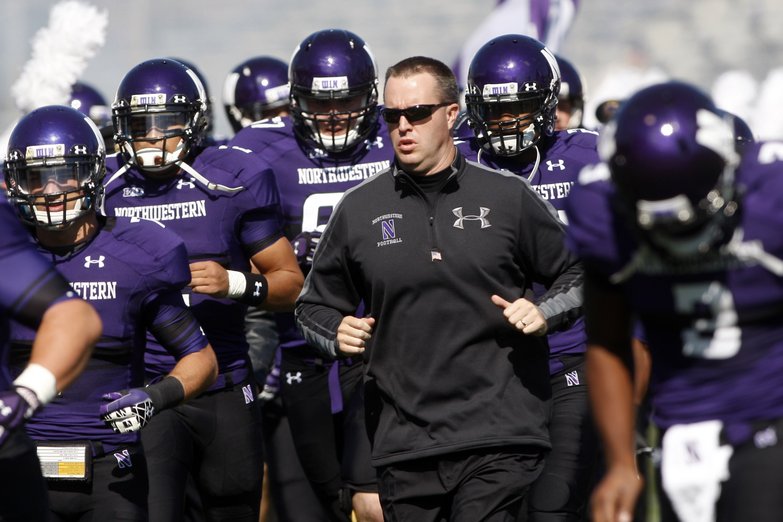 Bill Connelly kills it, as always.

And with that come the boosts elsewhere. People will shut up about Northwestern's attendance if the crowd can look raucous on College GameDay, and although there'll be a big Ohio State contingent at Ryan Field, NU's fanbase gets a huge credibility boost if they can drown out the red horde and make a Northwestern home game seem like a Northwestern home game -- something they haven't been able to do. And I'd bet recruits like playing for schools that win huge games and have fun, pumped, thrilled crowds. There's no way there's not an uptick if NU pulls off a W.

And this all leaves me anxious as hell to be in New York. And thus, I have a request.

The other day, I had a day off, so I did something I often do on days off, because I'm a good Jewish boy: I had bagels with my mom and we went to visit my grandma.

When we were leaving her apartment, something lying by the postboxes caught my mom's eye. "Hey, Rodger, look at this cool old Polaroid!"

My mom had no idea what the photo was, but an instant, I recognized where it was. 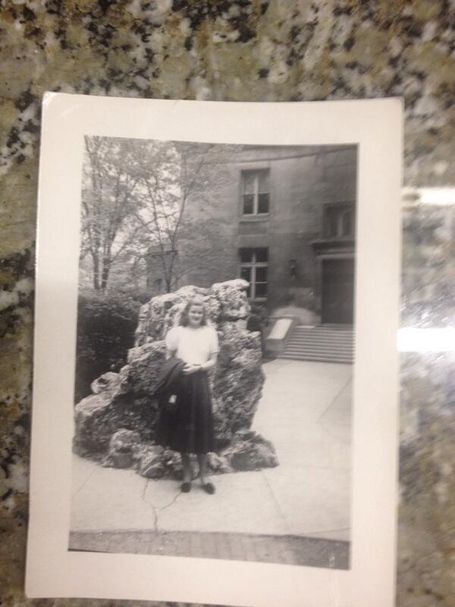 I don't know who this lady is, or when this photo was taken, or why it was sitting unminded in a New York City lobby. But I felt a static spark when I saw the picture: hey, that's Northwestern! It's a much-less painted Rock, with Harris Hall in the background, probably in the 1950's or 60's.

I saw this photo displaced, devoid of context, almost 1,000 miles and over half a century removed from the place and time it was taken. But me and this anonymous lady have shared an experience, a place: Spring in Chicago, still cold enough that you need a coat, but aesthetically gorgeous.

I remember walking past there drunk one night as a freshman, watching snow fall quietly, just thinking about how pretty it was, and how great it was to be drunk, 18, and outdoors while the snow was softly falling. I remember having a prolonged conversation with a girl I was into but hadn't seen in a while about an aviator hat, right back there on that staircase in the background, and I remember walking up Sheridan Road thinking about how ON POINT my flirt game was.

I sometimes wonder why I spend so much time thinking about COLLEGE SPORTS, of all things. Like, what? Of all the things in the world, why do I care about this sports team loosely related to the university I went to?

Others aren't like that. I like wearing my Northwestern snapback because I like Northwestern sports, and my friends poke fun of me when I do: "hey, I wish there was some way we could tell where you went to college." "Hey, did you graduate?" Some people go to Northwestern and end up not writing Northwestern sports blogs. Sometimes they even write about other sports with barely a mention of Northwestern. Why didn't I do that? Why have I chosen to be stupid enough to feel feelings about this completely irrelevant thing?

Then I remember the strength of moments. That weird familiar feeling I got looking at that photo, and remembering the moments I had with this team awkwardly connected with this school. I've felt that same feeling many times this week: watching whatever college football show, seeing College GameDay buses rolling past The Arch, or seeing Mike Greenberg, whose show I don't watch, broadcasting from Deering Field.

I don't know most of you. You're young and you're old and some of you went to Northwestern or some of you just grew up in the area or some of you just like the team for some other reason. That doesn't matter. What does matter is I do care about is that if you're reading this, you've probably also entered into this very silly pact with a sports team and a school. On account of that fact, you and I have shared seconds and places and feelings, even if we didn't realize it.

Tomorrow, even if Northwestern loses, will be an unforgettable moment. And it's a moment whose importance may be directly correlated with how many Northwestern fans show up in the background of a TV show, and how loud they cheer, and how funny the jokes they make are (Guys, make funny jokes.), and how loud they are in relation to some dudes from Ohio.

And if Northwestern wins? Well, it's gonna be super-huge and program-changing, that's what the first 1,000 words of this story were about, how bad is your reading comprehension you stupid jerk what's wrong with you.

Whichever moment it is, I can't experience it. Well, I mean, I can, but I'll be doing it from a different time zone, and through a bunch of TV screens. And that's why if you're there, I need you to do it for me. I need you to yell from 8 a.m to midnight, with breaks for alcohol. I need you to make those of us not in Evanston jealous and proud.

And if everything falls into place, I'll see you for a much different moment in Pasadena in about three months.

p.s. the last game I was really guilt-wracked about not attending was the Gator Bowl so that worked out well