Let's take a look at a few notes regarding Northwestern recruiting. For more, follow us on Twitter at @insidenu, and be sure to check out 247 Sports for even more in-depth information.

After initially choosing a decision date in December, four-star safety recruit Parrker Westphal has continued to push back his announcement date, and no date is set in stone right now. Earlier this fall, everyone on the 247 sports Crystal Ball predictor was choosing Westphal to end up at NU. While there hasn't been a shift in opinion away from Westphal-to-NU, Westphal has taken his time and officially visited his other two finalists, Michigan State and Vanderbilt. In fact, according to 247's Steve Wiltfong, Pat Fitzgerald told Westphal not to worry about deciding until after his high school playoffs, so it might still be awhile. Check out our short interview with Westphal in September:

Westphal has appeared to be NU's most attainable top prospect for awhile, but it's looking more and more like the Wildcats could also land four-star TE/DE Garrett Dickerson, brother of current NU wide receiver Cameron Dickerson. Initially, Dickerson was down to Michigan, Northwestern and Sranford. Then it came down to NU and Stanford, but the Cardinal appeared to be the leader. However, there seems to have been a change in opinion from 247's analysts recently. 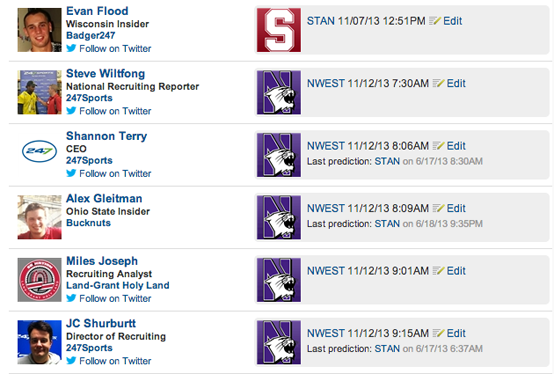 If NU can get both Westphal and Dickerson, that would be quite the way to end an already stellar 2014 recruiting class.

NU's 2014 class is one of the best Wildcat basketball classes in history, and with four players from that class signing their letters of intent today, it's on to the 2015 class for Chris Collins and his staff. Collins is already making a good impression on one of the top Chicago-area recruits in that class — Aaron Jordan. Jordan, a four-star prospect, has offers from Indiana, Illinois and Wisconsin in addition to NU, and he was at NU's scrimmage against Lewis.

“They are high on my list,” Jordan, who spoke with Northwestern coaches before and after the Wildcats’ 57-46 win over the Flyers, said of the Wildcats.

After taking in College Gameday at the lakefill the morning of October 5, Jordan connected with 2014 commits Bryant McIntosh, Scottie Lindsey and Victor Law while watching Northwestern nearly knock off then-No. 4 Ohio State on October 5. Jordan said the three future Wildcats urged him to consider following their lead and pledging to Northwestern.

“I feel like coach Collins can turn the program around,” he said. “They’re on the rise. It might take a while, but I think they’ll get where they need to be.”

Jordan won't be making any decisions for awhile, but NU certainly made an impression. He may be back on campus for a Big Ten game in January or February.

- As we mentioned above, today is the beginning of the fall signing period for basketball. 2014 recruits Bryant McIntosh, Gavin Skelly, Vic Law and Scottie Lindsey are all expected to sign their letters of intent.

- Four-star 2014 WR recruit Dareian Watkins was suspended from his high school's playoff game, leading some to believe that NU pulled his scholarship. We found that is not the case, and that Fitzgerald has reviewed the situation with Watkins.