NU only got one easy game before moving onto the big boys. Can the Wildcats match up with Dwight Powell and Chasson Randle -- and can they score enough points to keep up?

Share All sharing options for: Northwestern vs. Stanford basketball preview: Wildcats take on Cardinal in a real, real basketball game

Northwestern's favorite sport, basketball, returns tonight as the Wildcats head to Palo Alto. The Wildcats had a tune-up, in that they played an NAIA school in Lewis and won, and then they had kind of another tune-up, in that they played a lowly ranked Division I school and won and AARON LIBERMAN GOT TO PLAY Y'ALL, but now it's time for the big boy stuff.

I sorta really like college basketball -- STAY TUNED FOR SOMETHING ON THIS FRONT -- and I'm curious to see how things go for the Wildcats. I don't think NU is tourney-bound this year, but the games are certainly on the schedule for them to earn a bid if they hold their own for the course of the season, which hasn't always been true in years past.

That starts with Stanford -- you know, the other nerds who have the super-good football team. Luckily, their offensive linemen don't have time to multi-task while murdering everybody in sight, so we just deal with their basketball team. What of them?

Are they good?: These pathetic losers already lost a game. What losers!

Before we actually talk about this team, we need to discuss how one dimensional their attack was last year, per ESPN: 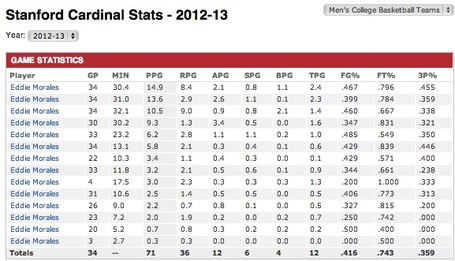 Damn, to get that type of production at 113 years old? Incredible. Don't let his age fool you -- Northwestern needs to key in on Morales defensively if they want a chance to win.

But seriously: these dudes were involved in one of the two best non-marquee games of the tipoff marathon, taking on BYU in the coveted 11 p.m. spot, and although Stanford did a remarkable job holding within arm's length of the Cougars, it wasn't their game to win. BYU is currently the fastest team in the country playing at a pace of 75.9 possessions per game, and the Cardinal made the mistake of trying to engage that in an 89-possession shootout. Both sides did well offensively, but the Cardinal rushed a few more transition opportunities than they should have, and came up short in a 112-105 (!!!!!) shootout.

I was pretty impressed with their team, though. Northwestern should suit their game better. They're a top 50 Kenpom team -- they were No. 44 nationally last year, and almost all their players returned, losing just Gabriel Harris, a guard of of 2.5 points per game last year. Forward Rosco Allen is also out with injury, but the guys who scored 68 of the 70 points in the team's win against Northwestern last year will be suited up.

Who's good?: Two names to know: Dwight Powell and Chasson Randle, the latter an AAU teammate of our own Dave Sobolewski.

Powell's a 6'10 Canadian monster who's going to push Northwestern around. Here's how I described him last year,and I'm sticking to it:

6-foot-10, long and strong, with range out to the three-point line, plus a good rebounder. He's not gonna blow past people with his speed, but he's got good speed and agility for his size.

22.5 points and 9.5 boards thus far -- obviously skewed by the BYU game, but, still. Through two games, he also leads the team in assists. He's a really good all-around player who happens to be able to body people, and Northwestern's going to have trouble putting a reliable body on him.

Randle's a 6'2 guard who's been able to score at will this year, with 33 points against Stanford despite going just 2-for-7 from deep. (He can shoot, don't worry.) He was the guy pushing the tempo a lot of the time, which as noted, was somewhat ill-advised, but he's gotten to the line nine times in each of his first two games, and I suspect that'll be a problem for NU on the perimeter.

They've got other players, but Powell and Randle are going to be the guys Stanford operates through.

What are they good at? Last year, Stanford's strength was passable three-point shooting and a very strong ability to avoid turnovers, with TO's on 17.3 percent of their possessions, but they struggled to get the foul line. Defensively, they guarded two-pointers well -- thanks, Dwight Powell -- but their weakness was forcing turnovers, managing to get the ball from their opponent 19.3 percent of the time, but they rarely sent their opponent to the foul line.

That should tell you what you need to know about this team -- aside from Powell, not tremendously athletic, but disciplined. I felt they lacked some of that discipline in a fast-paced game against BYU, but that should snap back into place against NU.

How did NU do last year against these guys? Let's discount the games in 2008 and 2009, since not many guys were there.

Last year NU played pretty impressively in one of their first games without Drew Crawford: Jared Swopshire and Alex Olah held Powell to just eight shots on 12 attempts, and Randle only had eight points too. But spurred by a career performance from Josh Huestis and a strong outing from center John Gage, the Cardinal jumped out to a 32-14 lead. NU would cut that to just one-point thanks to a 17-0 run sparked by Reggie Hearn and Alex Marcotullio. Sadly, they're gone.

They'd battle back-and-forth most of the way with Tre Demps tying the game late on a three, but point guard Josh Bright responded with one of his own.

The good news for NU is that they did control Stanford's two best players, and Huestis shouldn't do that again. The bad news is Gage, a 6'10 shooter from the center spot, is liable to do something like he did last year, scoring 12 points on just five shots. (I hate centers who can shoot. They are designed to make Northwestern struggle.)

What's our beef?: a) they beat us last year b) Come on. You don't know why NU fans should dislike Stanford? They're like Northwestern, except smarter and better at sports and with pretty, warm weather. It's infuriating. I hope bad things happen to all of them.

Difference between the amount of times Northwestern has been to the NCAA Tournament and Stanford has: Just 16! They haven't been since 2008, which we have in common. They have no sets of twins.

Names? I am a big fan of Stefan Nastic, who is just Steve Nash wearing a Serbian-looking mustache. And Robbie Lemons. Dawwwwwwwww Lemons.

Should NU win? No, but it's possible. Stanford's a really good offensive team, and most likely, they'll get theirs.

Dave Sobolewski takes Aaron Bright, a rare player who is smaller than him. JerShon Cobb, NU's best defender, takes Stanford's best scorer in Randle. Drew Crawford takes Huestis and keeps him from doing what he did last year. Alex Olah might have trouble staying with Gage out to the three-point line, but that'll be his job.

The test here is for Sanjay Lumpkin, who will receive the test of his career. The 6'6 guard playing the four by default will probably spend a decent amount of the night matched up with Powell, who is much bigger and much stronger. Lumpkin seemed like an alright defender in his first two performances against less imposing defenders, but tonight's his reckoning. I think he's better suited for the position than Nathan Taphorn and Kale Abrahamson -- taller, but thinner -- and NU hasn't shown any willingness to play Alex Olah and Nikola Cerina at the same time, so one of those guys will probably be on Gage. (You may wonder why we wouldn't play them against Powell, considering he's the same height as Gage, but Powell is way too fast for both and would either beat them down the floor in transition or get loose for open jumpers in the halfcourt.)

For NU to have any chance, Lumpkin will have to do his darndest to keep Powell away from the hoop. Then, the question is whether the Wildcats can score enough points to keep up, and judging from Game 1, that doesn't seem likely. I still don't see this team having significant options besides Crawford, and against an actual team in Stanford, that can get shut down.