Stats are for Losers? Time for Fitzgerald to Rethink That

Share All sharing options for: Stats are for Losers? Time for Fitzgerald to Rethink That

Stats are for losers. That’s Pat Fitzgerald’s catch phrase, and one that he’s extremely proud of.

Cite a statistic that seems troublesome for Northwestern? Well that’s because you’re a loser. You don’t know the things that really matter on the football field, like trusting yourself, giving it your all and [insert tough man football cliché here].

But here’s the thing about stats: they aren’t for losers. Sure, stats aren’t everything, but they can help coaches make informed decisions. If you don’t do that, then you wind up with a lot of yards and nothing to show for it, which has been NU’s last few games in a nutshell. So I guess in that sense, stats really are for losers.

A lot has been made of NU’s conservative play calling on fourth down this year, specifically the decisions to punt on the opponent’s side of the 50-yard-line. Fitzgerald’s response is generally that he was playing the field position battle. Certainly, you have to gauge the situation — it’s obvious to punt in that situation when leading late in the game. However, very few of the punts came in that situation. Many of them came in close games when NU desperately needed points. In those situations — especially when you’re fighting for bowl eligibility — the punts are pretty inexcusable.

But take the opinions out of it and it’s still a bad idea. This chart from an NFL Advanced Stats study shows that: 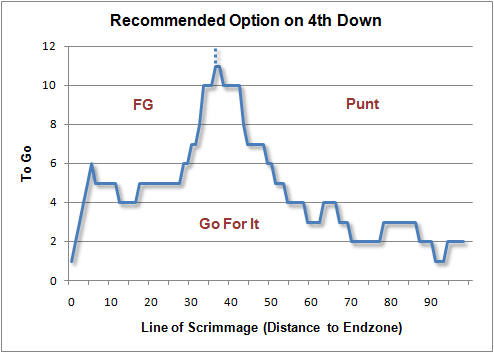 Of course, stats aren't everything and this study comes from the NFL, not college, but it suggests that teams should go for it far more often than they do. Aside from atypical situations, NU should always be going for it on fourth-and-eight from the 40 and fourth-and-six from the 37 — the two plays in question today — and that's especially true when you're 4-6 and fighting for points and bowl eligibility against a top defense. Fitzgerald will call going for it on fourth down in those situations a risk, but 1) 4-6 is risk-taking territory and 2) the numbers suggest going for it isn't a calculated risk, it's the right call.

But those are just stats — numbers that take away biases and preconceived notions to help coaches make informed decisions. That's for people who aren't "football people." That's for losers.

"The definition of insanity is doing the same thing over and over and expecting different results." That's one of Fitzgerald's favorite quotes, according to former NU linebacker Nate Williams, and it's a line I've heard him say a time or two. Ironically, it's turned on Fitzgerald and his staff.

It's not just the punts. It's running speed option with Trevor Siemian and Mike Trumpy on third-and-9 in the opponent's territory — not only does that rarely work, it should never be called given both players' skill sets. It's running inside zone over and over again in the red zone. Those red zone struggles? They're the difference between 4-7 and, at the very least, contention for a Texas Bowl bid.

It's gotten to the point where former players are calling for offensive coordinator Mick McCall's ouster on Twitter. It's not my place to comment on those opinions, but that's particularly unsettling. If McCall keeps his job, it will be because he didn't have the personnel to make full use of the playbook. That's true, but good coaches need to adapt their playbook to their personnel. McCall has proven himself to be a good coach at NU, but this hasn't been his banner year. Nor has it been Fitzgerald's.

NU's athletic department prides itself in being cutting edge. The Wildcats used to be known for trick plays and risk-taking. Now, they don't even resemble those teams.

Next year, NU should be better. The advanced stats certainly suggest that. But stats are for losers, right? At least, that's what the 4-7 coach keeps saying.