"Playbook" will be a weekly feature breaking down the x's and o's of Northwestern basketball. This week we feature two plays from Northwestern's 57-46 win over Lewis in the season-opening exhibition game at Welsh-Ryan Arena.

JerShon Cobb's floor vision -- With 3:57 left in the first half, JerShon Cobb used a screen to get to the middle of the floor, finding Nate Taphorn for an open three on the wing. 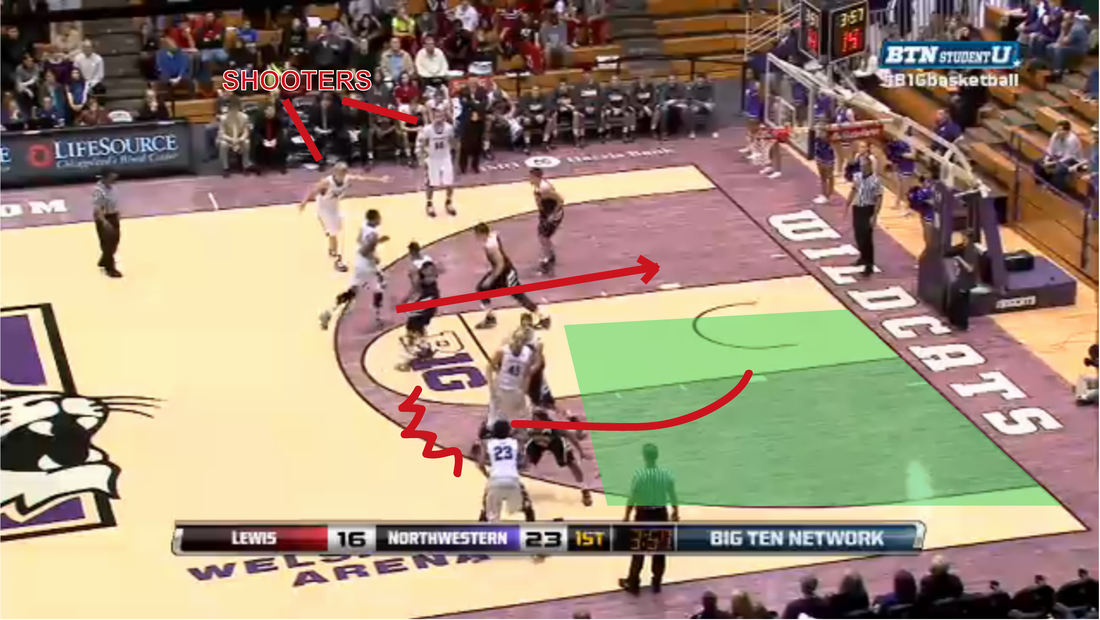 After running through motion-based offensive sets for the first 20-or-so seconds of the possession, the ball was eventually swung around the perimeter to Cobb on the right wing. Without Dave Sobolewski or Drew Crawford on the floor, Cobb is relied on as both the primary ball handler and scorer in this current lineup. Nikola Cerina comes up from the block to set a screen for Cobb. Opening up the entire right-side of the floor for a potential pick and roll between the two players. As Sanjay Lumpkin clears out to the opposite block, he creates room for Cobb to use the screen to get to the middle of the floor. Northwestern also balances the floor effectively with Taphorn and Tre Demps (two shooters) setting up on the weak side. 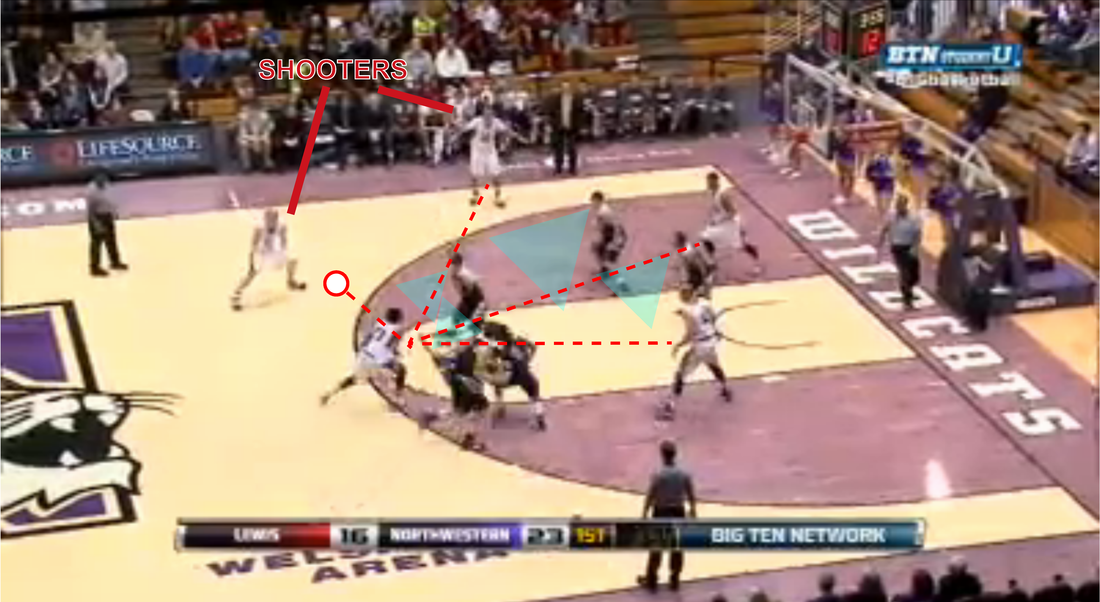 Cobb effectively uses the ball-screen to get to the middle of the floor. With both Cobb's and Cerina's defenders caught up trying to retreat to their men after the pick, it creates an advantageous 5-on-4 situation for Northwestern. Naturally, Lewis' defenders all turn their attention to Cobb, giving him plenty of options to go with the ball (marked by the dashed lines). For example, Cobb could complete the pick and roll with Cerina or find Lumpkin on the other block. Cobb keeps his dribble alive, getting to the free-throw line where Lewis is forced to crash down on him. As they do, Cobb finds Taphorn on the wing, where the freshman nails the open three.

Nikola Cerina's help defense -- As the clock is winding down at the end of the first half, Cerina comes to the aid of his teammates, stopping the Lewis guard in his tracks and forcing him out of bounds. 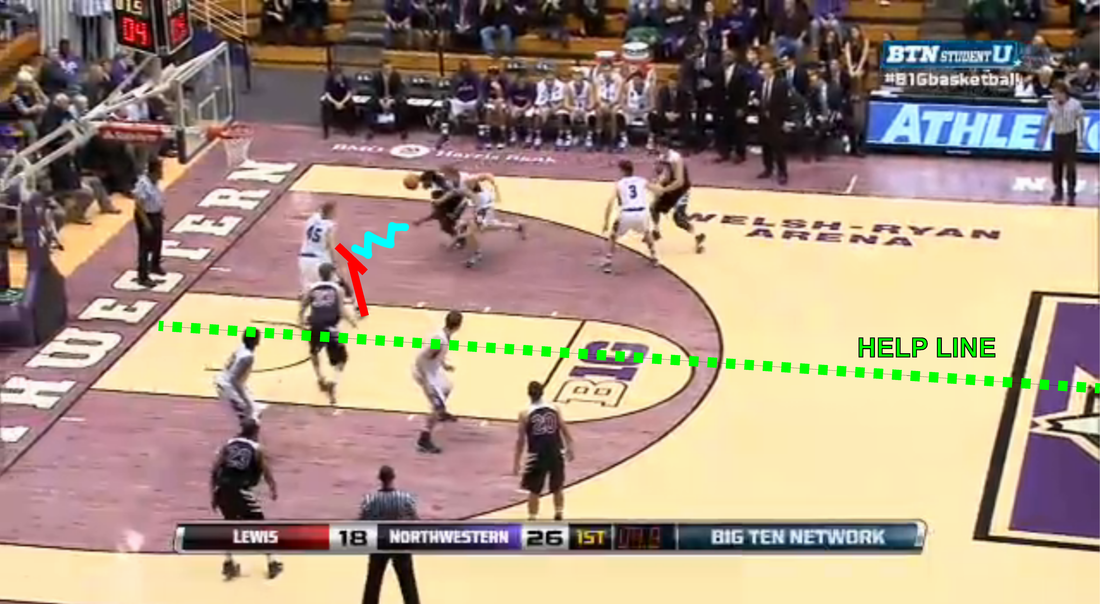 Lewis starts this possession with about a three-second difference between the gamecock and the shot clock. Looking to leave as little time as possible for Northwestern, Lewis takes its time looking for an isolation matchup one of the guards can exploit. They find that matchup on the wing where Taphorn is guarding a quicker guard. The guard subsequently beats Taphorn. Cerina immediately steps over to the opposite bock, stopping the guard's penetration. 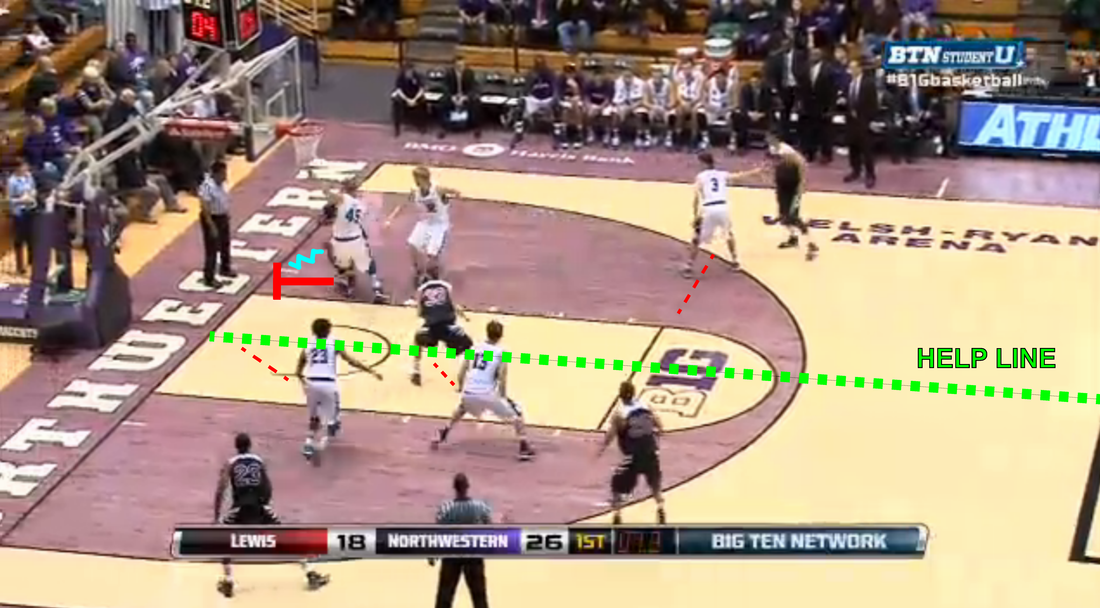 Cerina forces the guard towards the baseline, using his quick feet, rather than his hands to slow him down. After the game, head coach Chris Collins implied that he was impressed with how Cerina adjusted to college basketball's new and more stringent rules regarding hand checks. Because Cerina makes a very good individual defensive play by pinning the Lewis guard to the baseline where he turned the ball over after stepping on the boundary, Northwestern's defensive breakdown on this play was covered up. Luckily for Northwestern, Lewis' guard has his head down as he tries to drive past Cerina, missing a dump off pass to his wide-open big man in the middle of the lane. Both Cobb and Kale Abrahamson are way too far away from the help line. Ideally, Abrahmson would rotate down to take Cerina's man and Cobb would step down closer to the baseline, making a pass to the man he is guarding a lot tougher. There is also no reason for Sobolewski to be reaching out to his man beyond the three point line. He should be closer to the help line, ready to rotate on to Abrahamson's man if the ball is swung around the perimeter. If Cerina can show the same quickness and defensive intelligence he played with against Lewis throughout the entire season, it will be a huge bonus for Northwestern. But, too many defensive breakdowns -- like the one covered up by Cerina here -- will keep Northwestern from being a sound defensive team.