"Playbook" is a  feature breaking down the x's and o's of Northwestern basketball. This week we feature Alex Olah's post performance this year. We also debut the use of Synergy, an advanced stats database that gives tremendous insight into the quantifiable nuances of a basketball game.

Throughout the offseason, many penned Alex Olah as Northwestern's most transformative player. And during the preseason, Olah looked to be quicker on his feet and a bit more athletic as a result of his loss of 10 pounds over the summer. But in Northwestern's exhibition win over Lewis, it was backup big man Nikola Cerina that impressed the most.

The seven-footer spent a portion of the summer away from Evanston as he led his native Romania at the U-20 European Championships. During the tournament, Olah averaged 16.8 points and 9.1 rebounds per game, showing promise that he had started to put together some consistent play after an up-and-down freshman campaign.

That freshman season included promising flashes like a 12-point, 31-minute effort in a loss to Iowa at the Big Ten tournament. In that game, Northwestern's last of the season, Olah went 3-5 from the field, made six of seven free throws, grabbed seven boards and blocked three shots.

On the other hand, the young center had many possessions where he looked to be in a rush and seemed discombobulated. Frankly, the game looked too fast for him. Under Bill Carmody, Northwestern's Princeton offense often pulled Olah far away from the basket where he even found himself shooting some threes (he was 3-14 on threes last season). His post up game was almost non existent as he rarely had consistent opportunities to showcase his ability on the low block. When he did get opportunities, they often looked like this:

For the early part of the season, Olah looked to have regressed. The faster pace that Chris Collins looked to install seemed to hurt Olah's production. In Northwestern's first four games, he often found himself in foul trouble as he averaged just 18.5 minutes per game. In a two-game stretch of losses at Stanford and to Illinois State, Olah scored just six combined points and grabbed five total rebounds.

But over Northwestern's last four games, Olah has developed into a persistent scorer down low, showing vast improvement from a season ago.

Like Olah's clip from 2012, he gets the ball on the right block. But unlike a year ago, Olah doesn't immediately go into a move. After working hard to gain position on the block, Olah keeps the ball high as he waits for cutters to move through the lane, clearing out space for him to go to work. He then gives one hard dribble to the middle and goes right into a left-handed hook shot. For a seven-footer like Olah, that shot cannot be blocked and is a huge weapon in the post.

But what might be even more impressive is Olah's growing repertoire of post moves. Not only can Olah utilize his off-hand with a sweeping hook, the skilled big man has developed counter moves to keep defenders off balance.

Again, Olah sets up on the right block with a defender leaning on on his left hip. Olah senses that and after surveying the floor he takes two dribbles to give himself room to make a strong move toward the baseline. He then makes a nice drop step--exemplifying improved footwork--and finishes over his right shoulder. This versatility in the post makes Olah a major threat to interior defenses.

Here is Olah's post and isolation chart from Synergy for the 2012-2013 season: 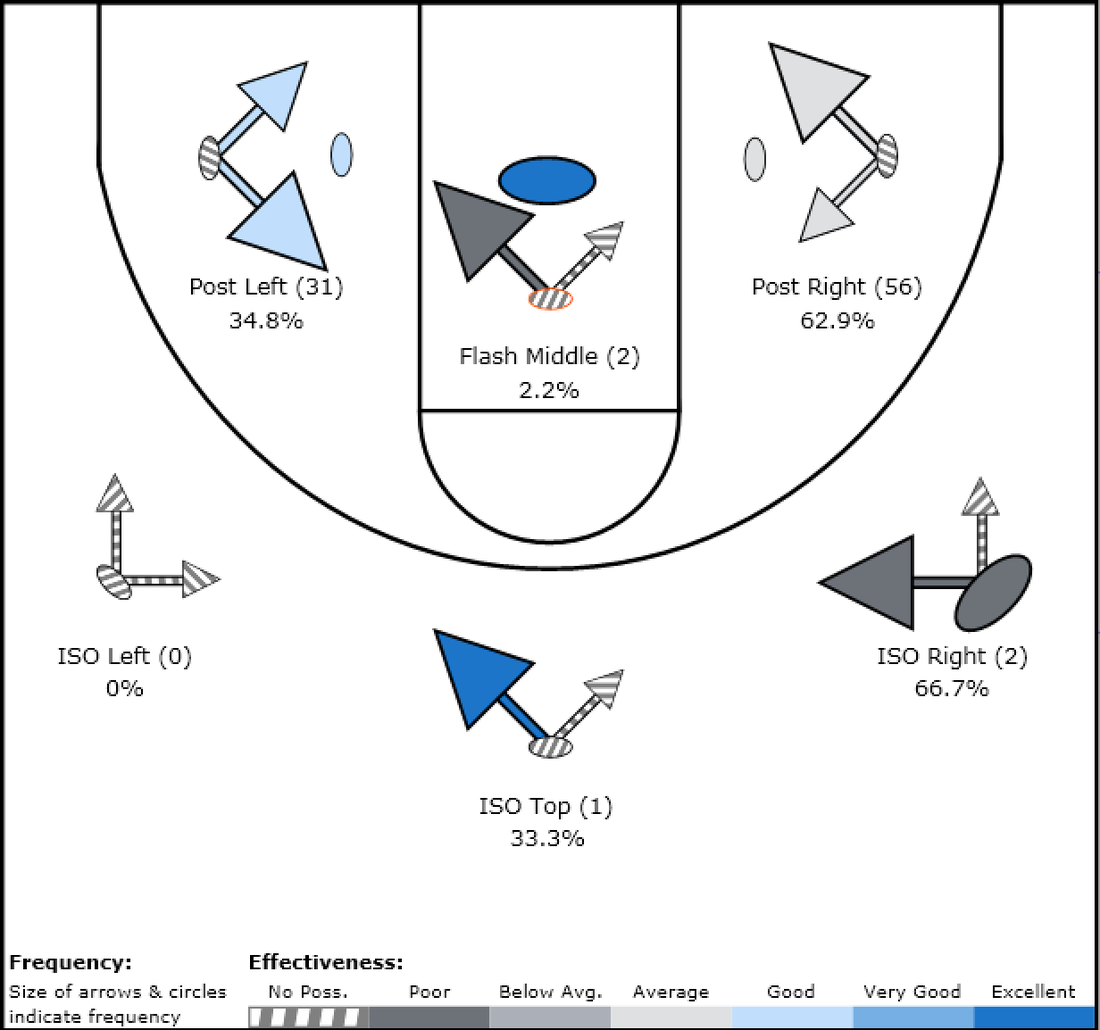 And here's the chart for this season: 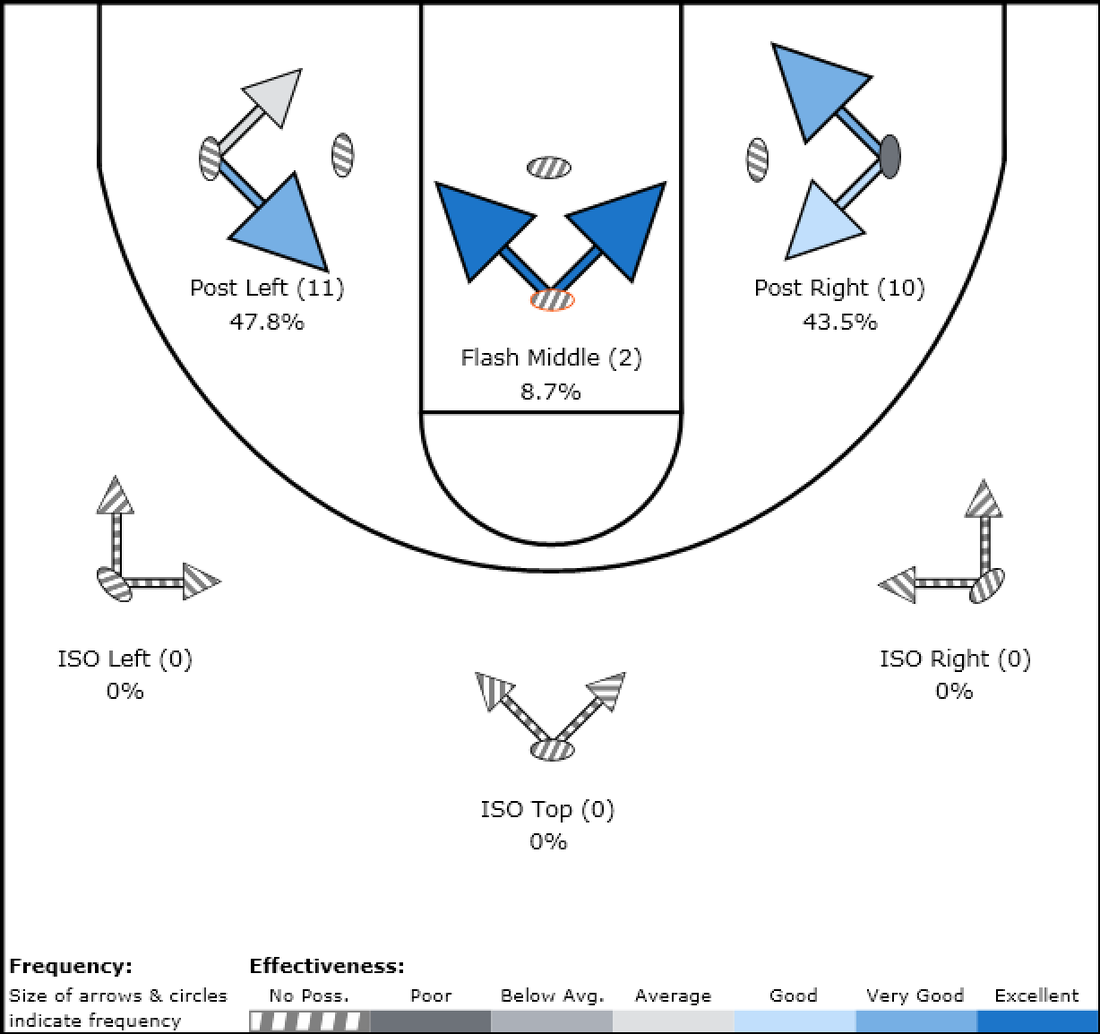 Olah's effectiveness has vastly improved through the first eight games of 2013-2014. For one, Olah is now posting pretty close to the same amount of times on both blocks and has shown that he can finish over both shoulders. Last season, Olah set up far more on the right block, making him more predictable. The center rarely attacked the middle of the lane from the right side last season and when he did, he was ineffective.

Clearly, Olah is far more efficient on offense thus far in his sophomore year. He's turning the ball over less, for example, and is getting to the free throw line more (and is shooting a much higher percentage once he gets there). This upward trend is encouraging for a Northwestern team that has struggled to generate offense at many points this season.

Although Olah scored a career-high 18 points against Gardner-Webb, Olah's most impressive game this season may have been Northwestern's 95-79 loss to UCLA in Las Vegas on Nov. 29.

With second leading scorer Drew Crawford out and Northwestern already facing its toughest test of the non-conference schedule in the 19th-ranked Bruins, Northwestern would need Olah to hang with UCLA. Olah went 3-4 from the field and 5-6 from the free throw line to finish with 11 points on the night. He logged a career-high 36 minutes, drew four fouls (including two and-ones) while only committing two personals, grabbed seven rebounds and had four assists.

The steady improvement from Olah this season adds a potentially dangerous element for Northwestern's opponents moving forward: an interior presence. If teams are forced to collapse on Olah in the post, it opens up shooters on the perimeter. With opposing coaches having to pick their poison against Northwestern, the Wildcats' offense will become far more threatening.

For Olah, personally, his development is a long-term process. He just recently turned 20 and his tendency to be too hard on himself hasn't gone away. With improved performance, maturity should be on its way. But right now, his confidence is at an all-time high.

"If I take my time and have patience [in the post]," Olah said after Northwestern's win over Gardner-Webb on Nov. 25, "I think I can score against anybody."