So when Northwestern head coach Chris Collins called Dave Sobolewski the team's "most true point guard" following a win over Mississippi Valley State, what does that really mean? Does it mean that Sobolewski's skill set matches that of traditional point guard? Does he fit the proverbial mold for that position?

As Alagappan notes, there really isn't such a thing as a "true point guard." In many cases, that phrase coincides with a pass-first player or, following Alagappan's methodology, a role-playing ball-handler.

Along with Sobolewski, JerShon Cobb and Tre Demps have shared time playing the point guard role for Northwestern this season. 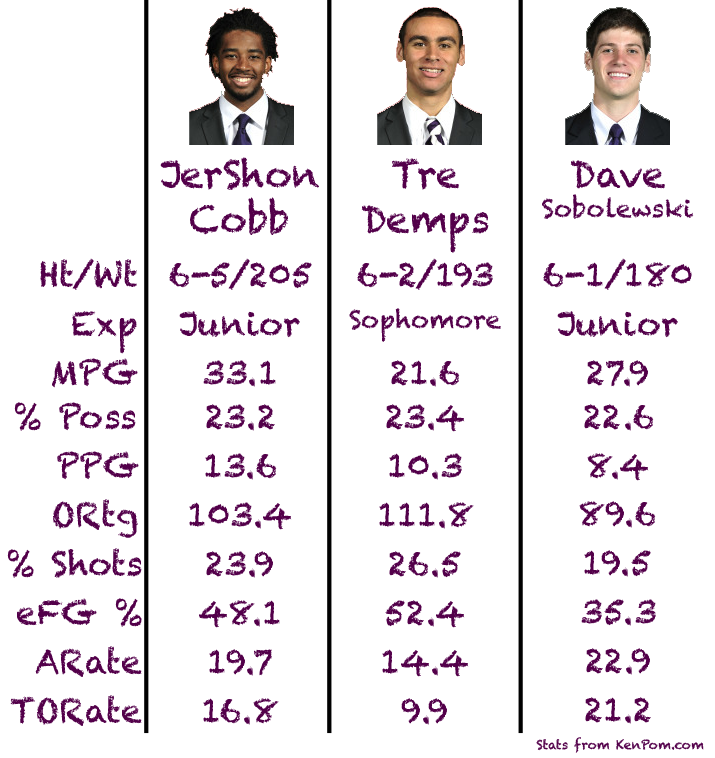 In previous seasons under former head coach Bill Carmody, the point guard (almost exclusively played by Sobolewski) was responsible for the initiation of the half-court offense, getting the ball to spot-up shooters and cutters. This season, under Collins, the offense is predicated more on getting out in transition, pick and rolls, isolations and slashing drives to set up open shooters.

In part because of this different style, Sobolewski has seen his playing time drop drastically from just under 35 minutes per game to about 28. He has also struggled mightily shooting the ball as his field goal percentage on the season has dipped below 30 percent.

Now Sobolewski has never been even an average shooter (he hasn't eclipsed 40 percent from the field during any season in his three years at Northwestern), but this season's struggles have been especially illuminating. Despite the poor shooting, none of Sobolewski's traditional statistics (points per game, assists, rebounds, steals, etc.) have declined rapidly.

But, as indicated in the chart below, many of Sobolewski's analytical statistics have declined this season, while Cobb's and Demps' numbers have improved.

Despite his statistical decline this season, Sobolewski still has the highest assist rate of the three players. The most troubling aspect of his game (besides his shooting), though, is his turnover rate. But in terms of being the "most true point guard" of the group, Sobolewski fits that mold the best.

Cobb and Demps are less traditional than Sobolewski as they look to score more. Demps, in particular, was maligned last year as he led the team in usage while playing under 20 minutes per contest. During Cobb's first two seasons, he played mostly off the ball and as a defensive stopper.

Before the season, Collins never hesitated to talk about Cobb's importance this season after sitting out all of the 2012-2013 season.

Here's what Collins had to say about Cobb's role before the season:

Cobb came out of high school as a point guard and seems to enjoy the role of initiator and ball-handler. His good size allows him to distribute from different parts of the floor like the post. He's also a more gifted finisher than either Sobolewski or Demps around the rim.

For example, Cobb demonstrates good natural instincts as a pick and roll ball-handler.

One of the biggest changes from Carmody's Princeton system to Collins' offense is the amount of pick and rolls. This season, Northwestern runs far more pick and rolls than they have in the past. Cobb leads the team in pick and roll ball-handler possessions this season.

But Cobb still struggles to initiate the offense sometimes, lacking some of the instincts other guards, Sobolewski in particular, possess.

Because Cobb's usage as a primary ball-handler has increased, his turnover numbers should naturally increase. But much to his credit, they haven't. Cobb's turnover percentage is actually lower than it was in 2011-2012 (the last season Cobb played). 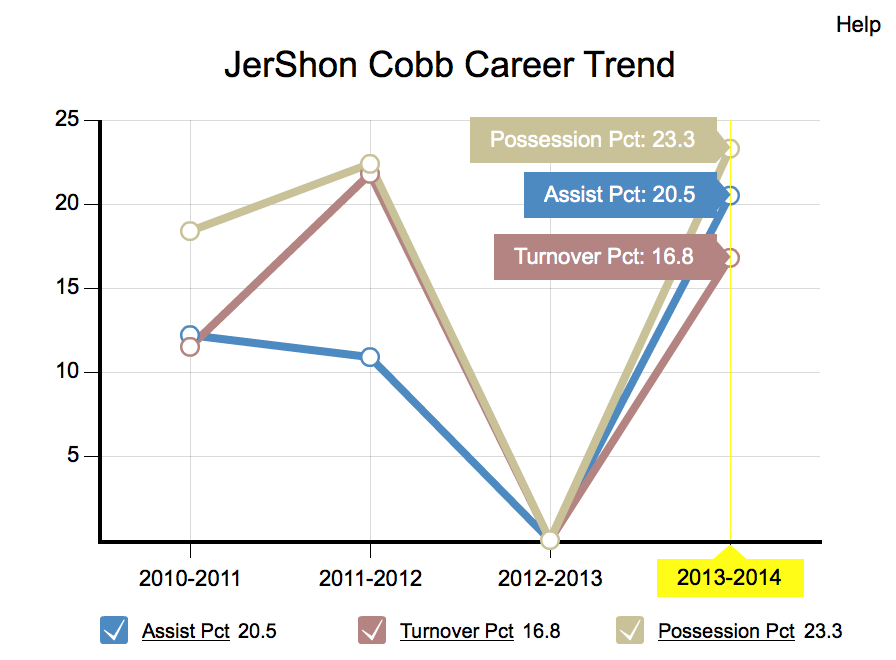 As far as Demps is concerned, he is the best shooter out of three players and also is the most aggressive when it comes to looking for his own shot. Now that Collins has increased his minutes, Demps has played increasingly well and has reeled in his sometimes erratic offensive game.

Although Demps doesn't assist as much as Cobb or Sobolewski, Demps is a better pick and roll ball-handler and more effective in isolation situations. 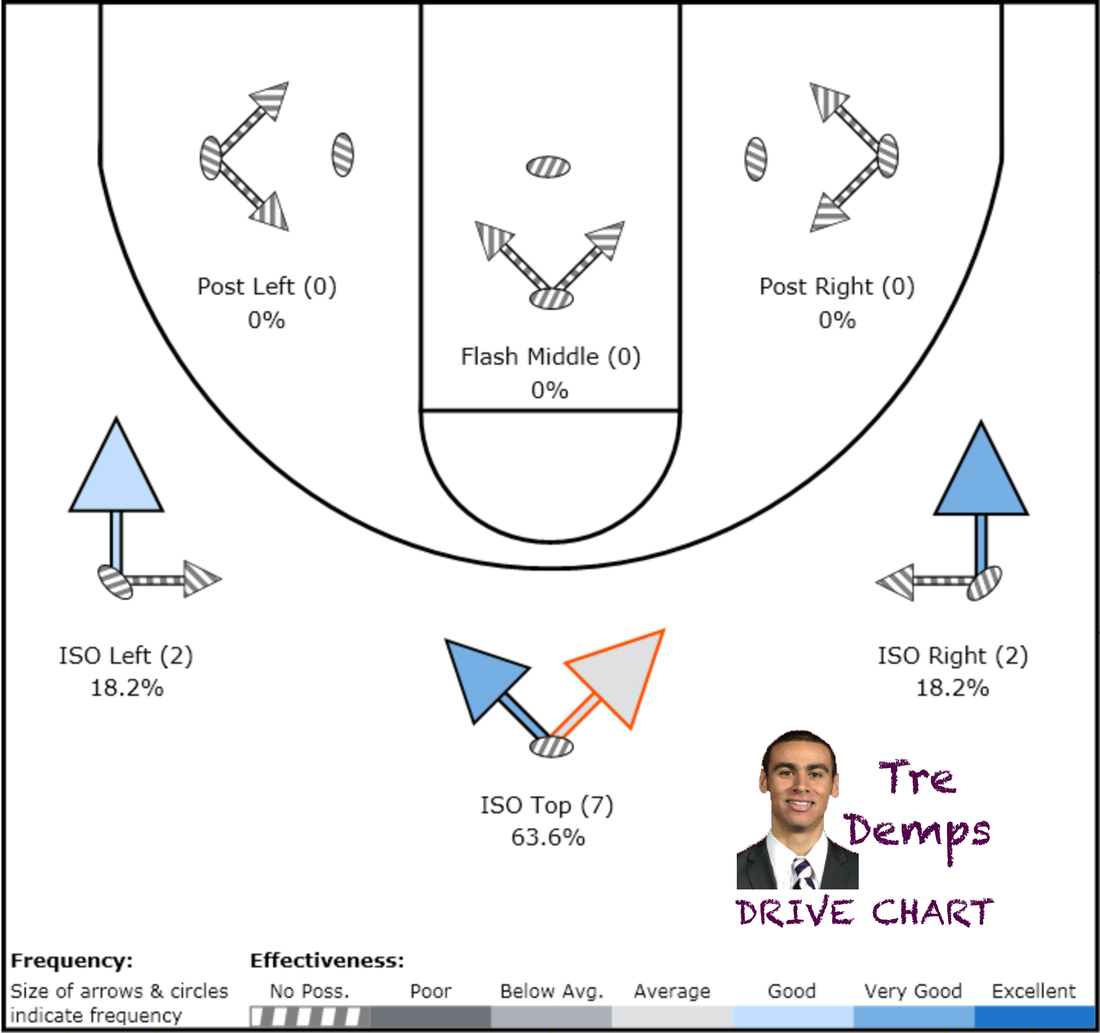 The graphic above shows how often Demps scores on his own drives. But when taking passes into account, Northwestern is even better when Demps drives.

With the addition of James Montgomery III to the starting lineup based on his ability to frustrate opposing guards as a defender, minutes will continue to become scarce for Sobolewski. Because Montgomery is a purely defensive asset, Sobolewski's struggles on offense make him a liability alongside Montgomery.

Therefore, any lineup with Montgomery almost has to have Cobb and/or Demps in the game to provide some more offense because, when compared to Sobolewski, they can more easily create their own shots and shots for teammates.

As Northwestern enters Big Ten play in early January, Sobolewski's role could very well be relegated that of a third ball-handler off the bench (behind Cobb and Demps).

Collins has already shown tendencies to favor versatile players such as Sanjay Lumpkin, Drew Crawford and Cobb over others by playing them a ton of minutes. Sobolewski really only fits the roles of an offensive initiator and occasional distributor.

Based on that, Cobb and Demps should continue to see a rise in their minutes as Northwestern's primary ball-handler while Sobolewski continues to struggle to find his offensive game.