Share All sharing options for: Identity crisis: Does Northwestern need an offensive identity?

For a first-year head coach such as Chris Collins, the non-conference portion of the season is a chance for the staff to evaluate the inherited state of their program. It's a chance to establish a culture, to develop a rapport with current pieces to set a standard for the future.

In a 30-minute conversation that Kevin Trahan and I had with Collins in early September, he talked about these ideas repeatedly. He spoke almost exclusively about the future and about the foundation he wanted to build this season. Now, part of that could be due to my line of questioning, but regardless, Collins' focus on the future illuminates an interesting narrative.

Through his first 13 games as a head coach (Northwestern's non-conference schedule) Collins is 7-6. He and his team had opportunities to make statements against five "power conference" teams: Stanford, Missouri, UCLA, North Carolina State and DePaul. Northwestern lost all five, along with a truly disheartening loss to Illinois State. After the Wildcats' 21-point loss to NC State, I wrote the following:

Right now, Northwestern’s coaching staff needs to make a decision as to what is more important: giving this current team the best chance to win with a modified game plan or installing the “culture” that Collins always talks about for the future.

At that point in the season, Northwestern was coming off a three-game losing streak where the team struggled to score consistently against more athletic and experienced teams. At that point, Collins had yet to establish an offensive identity for his team. And now, as his team prepares for the gauntlet that is the Big Ten schedule, it appears that Northwestern is still finding its way offensively.

For all the negative connotations associated with Bill Carmody's Princeton offense, it did provide his Northwestern teams with an identity. His teams grinded to score, running a series of handoffs and back-cuts for much of the 35-second shot clock. His players executed and embodied the system he employed. For Collins, it isn't fair to expect him to create an identity this early in his career. It's somewhat impressive, at least to me, that Northwestern's offensive stats haven't completely fallen off. Collins has been able to maintain the level--although the level is pretty low--that Carmody set last season. With what will eventually be a whole-scale systemic change, Collins' first year has been rough. And one of the things he's understandably struggled with is the creation of an identity.

Going back to my conversation with the coach late this summer, Collins spoke a lot about creating an on-court identity. He spoke of the concept as something he could sell to recruits but not necessarily in a tactical sense. What Collins seems to be most interested in is the identities of his own players and how he can put them in the best places to succeed. As he's begun to learn how his players play with each other, their tendencies and their strengths and weaknesses, certain players have been featured more and more.

There is no better example for this notion than Tre Demps. In an article I wrote last week about Northwestern's point guard situation, I made note of how much Demps has improved as a more efficient offensive threat this season. The sophomore has improved his minutes per game, offensive rating, points per game, effective field goal percentage, assist rate and turnover rate this season. But I really didn't realize the full impact of Demps' improvement until I put together his shot chart. 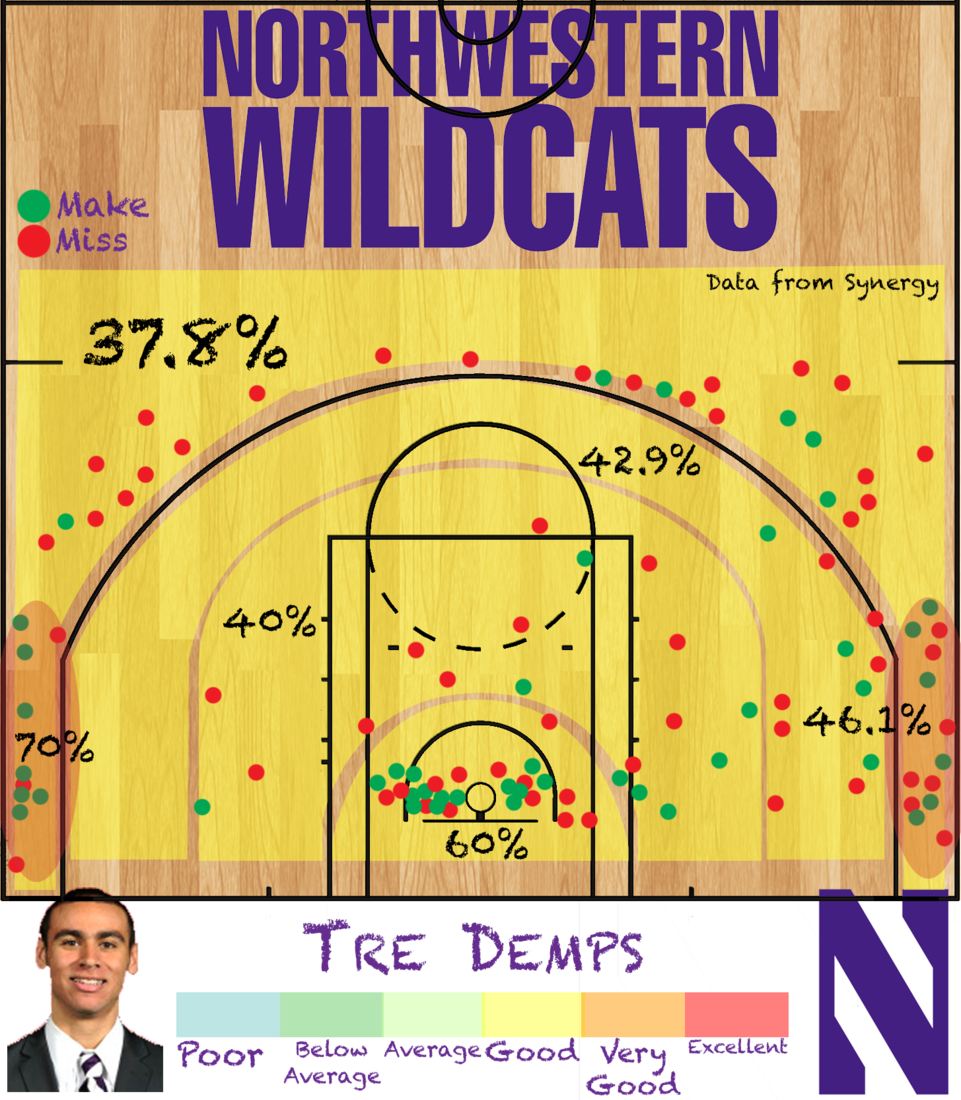 Last season on catch-and-shoot situations, 65.7 percent of his shots were guarded and just 34.3 percent were unguarded. This season, conversely, 53.7 percent of Demps' catch-and-shoot attempts are guarded and 46.3 percent are not. When looking just at the unguarded numbers, Demps has improved his aFG% from 37.5 percent last season to 68.4 percent this season, taking his status as a below average wide-open shooter to a very good one. A lot of that--despite the criticism of his system--is due to Collins' ability to sense his players' strengths.

Demps is both a creator off the dribble (leads the team in points per possession as a pick-and-roll ball-handler and second to Drew Crawford among Northwestern players with at least 14 isolation possessions) and a knockdown shooter. In Northwestern's game against Mississippi Valley State, Demps scored 18 points on 13 shots, helping to make up for the loss of JerShon Cobb to a sprained ankle.

Here's a play from early in that game that showcases Collins' play design to accentuate Demps' strengths:

By clicking on each indicated spot on the following graphic, you can read detailed descriptions of the play.

Demps is shooting a whopping  56.5 percent on corner threes this season, an unbelievable mark and Collins has been trying, especially as of late, to utilize that strength. As Northwestern moves into conference play this week, the outlook looks bleak.

From a talent standpoint, Northwestern doesn't match up with other Big Ten teams and as far as strategy goes, the team is far more unstable and inconsistent than the other Big Ten teams. Does that fall on Collins' shoulders? Yes. But is it reasonable to suggest that he hasn't done anything to help Northwestern's offense? No.

With the utilization of Demps (a sophomore), freshmen Nathan Taphorn (an increasingly effective pick-and-pop player) and Sanjay Lumpkin (a roaming screener with freedom to attack the offensive glass), Collins is looking at the future of his roster and trying to craft offensive sets to fit his personnel. Just because his system doesn't have a name like the Princeton, it doesn't mean that Collins isn't committed to running an offense.