Northwestern (4-5) fell to North Carolina State (5-2) on Wednesday night in Raleigh, N.C. as a part of the Big Ten/ACC Challenge. The 21-point loss is Northwestern's worst defeat of the season so far and the third double-digit loss in a row.

It's no secret that TJ Warren is one of the nation's premiere scorers as he leads the ACC in points per game. After back-to-back 30-point games, Warren picked up right where he left off against Northwestern.

The sophomore forward scored 16 points in the first half on 7-10 shooting. Able to get into the lane early and often, Warren carried NC State's offense for much of the game.

Northwestern tried to match the six-foot-eight Warren with the smaller Drew Crawford, Sanjay Lumpkin and JerShon Cobb throughout the game, but none of the three swingmen had any consistent success containing him one-on-one. When Northwestern went to a zone, there were multiple occasions where Warren was able to flash into gaps and hurt the Wildcats. Warren also repeatedly used his right hand to drive and was rarely forced to settle for jump shots.

Here's his shot chart from the game: 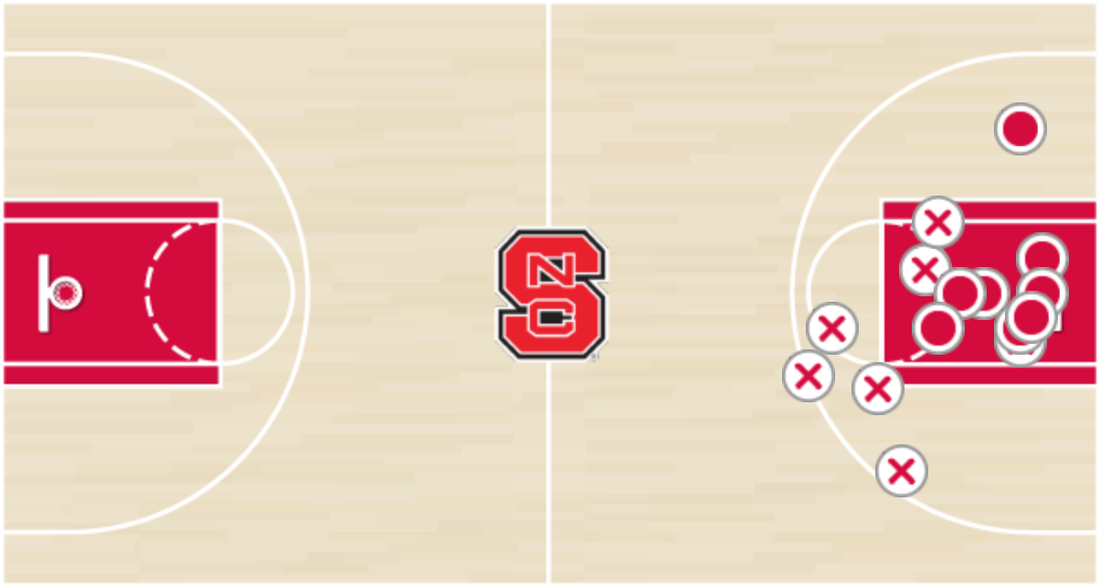 In fact, Warren only took four shots outside the paint in the entire game. This season, Warren has been far less efficient when taking jump shots and when driving to his left. Both stats, especially Warren's jump shooting, stayed true tonight as he only hit one shot from outside 13-or-so feet. Northwestern struggled to keep Warren out of the lane as he finished with a game-high 22 points.

No help for Drew Crawford

After missing Northwestern's loss to UCLA last week with back spasms, Crawford came out against NC State strong as he knocked down two straight threes to start the game.

Crawford led Northwestern with 17 points in the contest.

Crawford hoisted up a game-high 16 attempts, making just five of them (31.25 percent), because he was the only player that was able to get anything going on the offensive end.

Where does Northwestern go from here?

When looking at the non-conference slate for Northwestern before the season, the four games that stood out were at Stanford, vs. Missouri, vs. UCLA and at NC State. These four "big-name" teams were thought to be a measuring stick for Chris Collins' team in his first season. And, quite frankly, Northwestern hasn't measured up.

The Wildcats lost those games by an average of over 15 points.

Offensively, Northwestern's only current identity is taking threes and a lot of them. Coming into the game against NC State, 42.6 percent of Northwestern's shots were threes, the 20th highest mark in the nation.

On the defensive end, Northwestern works hard to play an aggressive, switching man-to-man style, but the team just doesn't have the foot speed to keep up with high-major teams like Stanford, Missouri, UCLA and NC State off the dribble. As a result, Northwestern's inconsistency on offense becomes magnified because of an inability to respond to opponents' runs.

Right now, Northwestern's coaching staff needs to make a decision as to what is more important: giving this current team the best chance to win with a modified game plan or installing the "culture" that Collins always talks about for the future.