2015 Ath. LaCario Davison says Watkins de-commitment will "not affect" his recruitment with Northwestern

Share All sharing options for: 2015 Ath. LaCario Davison says Watkins de-commitment will "not affect" his recruitment with Northwestern 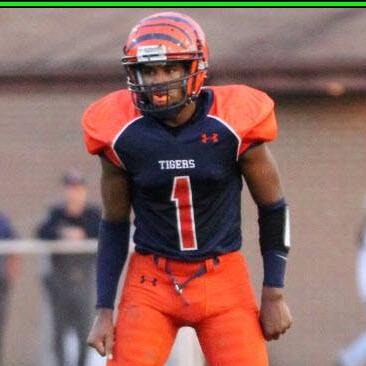 The Wildcats are still pursuing Davison, according to the 2015 Ath. (Photo courtesy LaCario Davison).

There were two reasons for Northwestern to be excited when 2014 four-star WR Dareian Watkins gave his verbal commitment to the Wildcats in April. First, Watkins is an excellent playmaker with elite athleticism. Second, Watkins' decision seemed to increase Northwestern’s chances of eventually securing the commitment of 2015 Ath. LaCario Davison, who lives with Watkins and has said he would like to play with him in college.

With Watkins de-commiting from Northwestern in November, is Davison – who once considered the Wildcats his top choice, in part because Dareian had committed to play there – still interested in the Wildcats?

“I think there’s a chance I could end up there,” he said Wednesday. Watkins’ de-commitment, Davison said, does not change where Northwestern ranks among his list of interested schools, which includes Purdue, Wisconsin, Illinois and Michigan State. “Doesn’t affect it,” Davison said.

While he has not spoken with head coach Pat Fitzgerald since Watkins de-commited, Davison said he talked over Facebook to wide receivers coach Dennis Springer, who indicated Northwestern is still interested in recruiting Davison.

Davison has visited Northwestern at least four times, including the weekend of the Ohio State game. He said he visited Wisconsin with Watkins twice over the past three weeks, and that he has also seen Indiana, Illinois, Purdue, Nebraska and Michigan State.

The 6-1, 190-pound Davison played safety and wide receiver for Galion (OH) high school in his junior season, after missing his sophomore season due to a torn ACL. Davison said Northwestern has not indicated which position it would like him to play for the Wildcats, but that he could see himself playing on either side of the ball. Davison said he is not fully recovered from the injury. “I’d say around 80 percent,” he said.

Davison hopes to return to Northwestern sometime next year, though he has yet to talk with his godparents, Heath and Cheryl Watkins, about planning out any more visits.

There is no timeline for Davison’s decision, but he said he would like to pick a school before his senior season. Davison, who has taken a number of visits with Watkins over the past year, hopes to “take it easy” over the next few months while playing for Galion’s basketball team.