Wednesday Sips, featuring the best article about NU sports, FEAR THE D, and a capella

Share All sharing options for: Wednesday Sips, featuring the best article about NU sports, FEAR THE D, and a capella

The best article you'll read about Northwestern football for a long while: You have to go and read Rohan Nadkarni's oral history of Northwestern football. First off, oral histories are like this great idea in journalism that basically proves how good we are at writing can sometimes be useless: when there's a story, sometimes the best thing to do is just let the people who made the story tell it, and that's what this is.

Second, it's really complete. Everything about the Pat Fitzgerald era of Northwestern football.

Third, I sometimes feel like a somewhat enlightened follower of sports. I like to think that, thanks to guys like MountainTiger and MacArthur, everything can be broken down into some combination of x's and o's, players' talents, and some statistics that pithily capture those talents. It's important to remember that sometimes there's a lot of stuff going on in the minds of those players. Especially as a guy who writes about sports and has to hear quotes from the athletes and coaches involved that often completely ignore those emotions and make them seem like always-confident, always-praising automatons. A few years later, some of these players were able to remove some of the things that prevented them from being honest at the time and you get some really cool insight.

Fourth, there's this awesome wave of Northwestern football happenings over the past few months, and a lot of them are captured in this story.

In my defense, I had some modestly readable columns while I was sports editor of the Daily.

Keep them football good feelings running: By watching the team get jacked:

Rantoul's Big Ten Team, etc. etc.: Illinois wants a bigger presence in Chicago! 26-0 runs and basketball recruiting aside, this story is just going to heat up and heat up over the next few years while Northwestern and Illinois pour more and more effort into trying to get Chicago to pay attention to their sports teams until eventually every single non-Big Ten alum in the city raises up its voice to say "WE'RE INDIFFERENT BUT IF WE HAD TO CHOOSE WE'D PROBABLY PICK NOTRE DAME"

Oh, Northwestern also beat them in football. And basketball, but I think this more recent one kinda wiped that one out.

WLAX happenings: No. 4 Maryland beat No. 2 Syracuse, which cements Northwestern's status - for now - as the No. 1 team in the country. The chicks with sticks play No. 5 North Carolina on Friday night, though.

Started from the bottom now he's here: Darren Rovell tweeted his resume from college last night in preparation for speaking at NU today. It's always weird to hear about things now-semi-famous people did when they were at NU, and its not surprising when they're student media stuff for various media people - its always more surprising to find out, like what house Seth Meyers was in - so, what stood out to me is the a capella group shoutout: 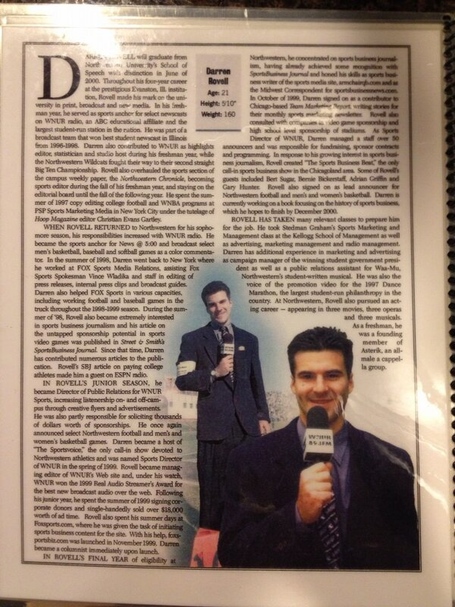 I had him as more of a Purple Haze guy to be honest...

(are there a capella group stereotypes? No offense to any a capella types, but you guys are annoying as hell.)

I give her that D/that's what I was born and raised in: DePaul's new slogan is FEAR THE D, which, uh, yeah. Personally, I just see this as a shoutout as DePaul's finishing dead last in a survey of campus sexual health services. "SERIOUSLY. FEAR THE D. IT HAS HEPATITIS F, AND THAT HASN'T EVEN BEEN DISCOVERED YET."