Breaking Down the Tape: Olah Showcases Passing Skills Against Purdue

Share All sharing options for: Breaking Down the Tape: Olah Showcases Passing Skills Against Purdue

Alex Olah has had quite the week. After struggling with, well, just about everything during January, Olah has put together two straight impressive outings in a loss to Michigan and a win against Purdue. He had 10 points against the Wolverines — albeit against a small, but solid frontcourt — and proved that maybe it wasn't a fluke, accumulating 9 points and 5 assists against the Boilermakers and touted freshman center A.J. Hammons.

It's important to realize that this doesn't mean Olah has "turned a corner." He hasn't been consistent this year, so this progression certainly won't continue without some bumps in the road. However, what it does show is some of the potential that we can expect to see as he comes of age in the program. As his confidence continues to improve, so will his production, but that will be a long process that will extend into next season.

After the Michigan game, we broke down some of the promising parts of Olah's performance shooting the ball and scoring in the post. He showed some more good signs in that area against Purdue as well, but the most impressive parts of his game against the Boilermakers were his passing, vision on offense and activity level. His passing, in particular, led to opportunities for others.

"He's not trying to force things," coach Bill Carmody said. "He's got some pretty good guys he's playing with, so he doesn't have to score when he gets the ball down there every time, because earlier in the year he'd get it down there and he thought that meant he had to try something, and he's not at that point right now. I thought he did a really nice job.

"There is a progression down there. It's just a normal maturation."

Today, we'll break down two of Olah's five assists in different scenarios from the Purdue game.

If you've followed Northwestern basketball at all, you know about the Princeton Offense and how it creates assists and backdoor cuts with textbook passing. Against Purdue, NU had 24 assists on 26 made baskets, so the offense was clearly running well. The Wildcats hit a couple early threes, which opened up cutting lanes, and as Purdue coach Matt Painter mentioned, his players looked lost out there a lot of the time.

This backdoor pass by Olah is one of the better passes I've seen from him this season, and it's the textbook example of how this play should look, even when the defense isn't out of position. Here, Olah gets the ball from Demps on a pass and looks at his options — preferably Demps or Hearn cutting toward the hoop. 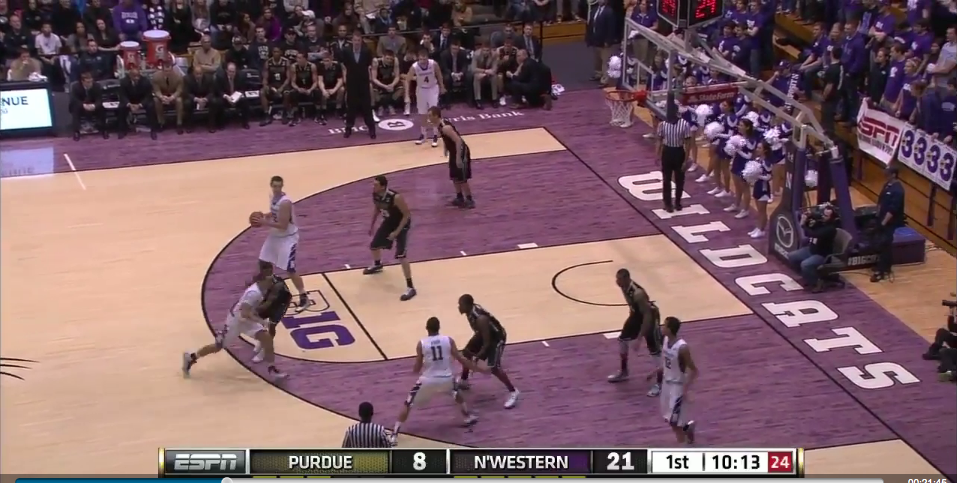 Hearn cuts toward the hoop, while Demps stays put. Olah delivers an absolutely perfect pass, splitting three defenders. He makes a quick move, so Hammons (the player defending Olah) can't step in to steal the pass.

The defender guarding Hearn doesn't even do that bad of a job guarding him. He's a step behind, but sticks with Hearn the whole way. However, the pass from Olah was flawless and led Hearn to the basket for the lay-in.

If Olah can become a consistent threat to shoot the mid-range jumper — he's hit a few of them the last two games — then he'll command the respect of his opponents to play him close. That will open up passing lanes like these, and if Olah can continue to execute in situations like this, he will be a very effective part of the offense.

In the piece earlier this week, we discussed Olah's success with the pick and roll. He's done a great job of getting open in the post on that play and made some nice moves to get a couple buckets off the pick and roll in the last game. However, as Carmody said, Olah doesn't have to try to score every time he gets the ball down low — sometimes it's better to pass it off. Here's an excellent example of that situation.

Here, Olah goes to set a pick for Dave Sobolewski. Olah, again, is being guarded by Hammons.

Olah comes off the screen and rolls down low. Meanwhile, Hammons and D.J. Byrd both guard Sobolewski. In this picture, Olah has already gotten the pass from Sobolewski and has two options here — shoot or pass off to Jared Swopshire.

Olah dribbles in and dumps it off to Swopshire, who gets the lay-in in time before the Purdue defenders can get there.

Like in the last play, Olah had great vision to find Swopshire, rather than force a shot. His post moves and inside scoring will get more consistent in time, but his ability to find the best scoring option on the floor has been impressive over the past two games.

As I mentioned earlier, this isn't a sign that Olah has turned the corner. However, it shows promise for the future and showcased his passing — a skill set that is essential in the Princeton offense. He still has a long way to go with his moves in the post, his scoring abilities, his defense, his rebounding and even his passing, but the last two games certainly show reason for NU to be optimistic about the development of its center.