We spent the biggest day of the college basketball calendar watching two former Northwestern players play in France and making fun of an ex-NU player comforting somebody crying in the One Shining Moment video. Go Cats.

Last night was the NCAA Tournament finale, and, as usual, Northwestern wasn't involved. However, there were a few weird links to former Northwestern players just kept coming up over and over again yesterday, and I figured it was worth a post. We've gotten caught up in looking forward with Chris Collins, and now we must look back.

How fun was that national title game? It was a weird fever dream of a game, and although I was pulling for Michigan - B1G B1G B1G, plus, man, Spike Albrecht, where did that come from - the better team won in the end. I truly loved this college basketball season and NCAA Tournament, and it was a fitting conclusion. And of course, I got hyped for the One Shining Moment video:

WAIT WOAH WHAT THE HELL DID YOU GUYS SEE KYLE ROWLEY 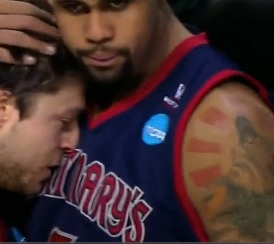 AND THAT WEIRD-ASS TAT HE HAS NOW

Yes, the One Shining Moment video - a compilation of the best moments in the NCAA Tournament featured former Northwestern center Kyle Rowley. Sure, he was consoling a crying Matthew Dellavedova, the real moment there, but still, it was Kyle Rowley, the foulinest, traveling-est Trinidadian we all know and love. (The same moment showed up in SB Nation's take on One Shining Moment as well.) Rowley really did next to nothing in the tournament - seven minutes for St. Mary's, no points, two rebounds, a foul and a turnover - but still, he made the video.

And then, after the tournament, I realized something kind of sad:

I wonder how Jared Swopshire feels right now. You are a national champ in our eyes, Jared! #NUHoops

Ugh, and now I feel awful. The backstory behind the end of Swop's time at Louisville hasn't been explicitly written down somewhere, but it basically goes like this: he got hurt, had to sit out a year, and Rick Pitino said they had already committed to other players and that if he wanted to play a fifth year, he'd have to do it elsewhere. And so Swop moved to Northwestern, had a season-ending knee injury, and Chane Behanan had 12 rebounds in the championship game. Louisville actually could've used Swop after the Kevin Ware injury, but instead of being an 11th man on a championship team, he got hurt on a team that was absolutely lost without him. Poor guy, and we continue to wish him luck in his endeavors as he tries to heal his knee and make it in the pros.

But arguably the biggest news of the day came from France:

Huge game across the pond today. Shurna vs. @juicethompson22. Who ya got? #B1GCats

Yes, Shurna's SIG Strasbourg took on Juice Thompson's ASVEL Lyon. Two Northwestern players playing against each other professionally! Who cares what continent its on? and since I was working, I figured out how to get a stream of it on the computer for a few minutes.

It was pretty fun to watch. In part because French basketball commentary uses, like, a lot of English words, and I like making fun of French people in my head. In part because the French cameras for some reason are allowed to film timeouts: 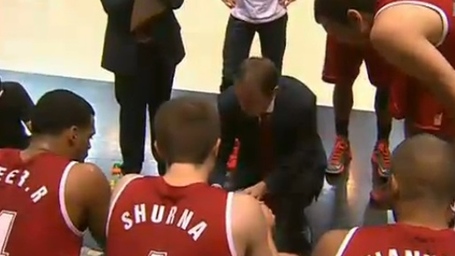 And during those timeouts, you can hear the coaches coaching... and they do it in English. Heavily accented English. I listened to John Shurna's coach draw up plays and tell them that "zey need to attack ze big guys," and was laughing out loud the entire time.

As for Shurna and Juice, I saw Shurna knock down a pair of threes, and the announcers said that "Shurna (pronunciation: schoor-NAH!) a reveillé le equipe", which is French for "Shurna ate baguettes in the park." I didn't see Juice Thompson play before my feed conked out, and I was too slow on the trigger to snap screenshot of a) his JUICE tattoo on the bench next to his coach and b) him standing in a huddle.

Anyway, Juice ended up with nine and Shurna had just the six, and Juice's team won 84-81:

Good win tonight! Fun playing against Shurna and catching up with him! #WildcatNation instagram.com/p/X3DKj3GLfK/

However, this led me to look into their Frenchisms a bit. Shurna, as we noted in a sips post a while back, is sort of tearing it up for Strasbourg - he's third in the league in shooting at 48.1 percent from beyond the arc, and his squad is second in the league. (Since you're wondering, Sean May leads the league in scoring, Jon Brockman in rebounding, and Khalid El-Amin still plays there.) As such, the French league site interviewed him!

As always, let's translate because I took French in high school.

You quit university it was a few months and, now, voila! You're in France for your premier professional experiences! Comment on how you passed the adaptation?

Magnifically! My teammates and my coaches gave me a lot of AIDS, and they rendered my integration plus easy. I did reconnaissance, and I made a party at the club. I enjoy speaking French! I like to eat cheese in the library.

Sounds like Shurna's French is coming along really well and the interview totally wasn't translated by some staffer at the French basketball league! He definitely doesn't explicitly say that he isn't speaking French in the interview.

It's not the only story written about him: they asked his coach about his shot, which, again, we sort of wrote about a few weeks back:

His shot is unexplainable. It's ugly, very ugly, I told him that. The hand normally finishes near the top. There, I said its like an elephant's trunk. It makes everybody life, but at the same time, it falls.

There's no articles about Juice, sadly, even though he's averaging 11 points and three assists on a good team as well.

As for other former NU players, there's not a ton of good news - Kevin Coble and Luka Mirkovic don't appear to be playing for their Japanese and Greek teams, respectively, but maybe something's up with that site.

So that's it, I guess. Yesterday was the biggest day in college basketball, and I'm stuck picking at scraps of former guys playing in Europe and at St. Mary's and elsewhere.