For Northwestern, next year's matchup against Ohio State will be the showcase of all showcase games. It's a possible top-15 matchup, a nationally televised night game and may even end up being the location for ESPN's College Gameday. These kinds of games don't come around often for Northwestern — maybe once a decade if they're lucky. Crowd shots from this game will be plastered all around the football complex, and it will be featured in just about every NU athletic department promotional video from October 6 to, well, a long time from then.

This has just about all the makings of the perfect national showcase of NU football, but one glaring obstacle remains in the way — the crowd. At most schools this wouldn't be a problem for a primetime "showcase" game, but NU fans have yet to show they can sell out a stadium on their own, and with a large fan base coming to town, there's the potential for there to be a lot of red in the stadium. Just look at what happened last year against Nebraska. 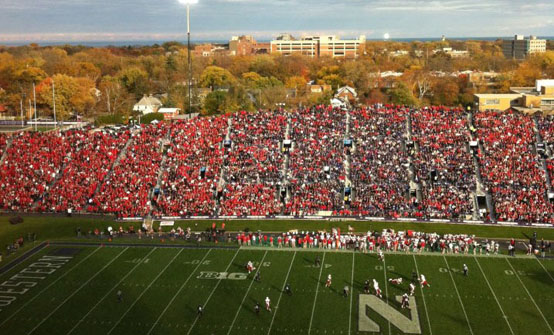 The Nebraska game might be the most glaring example of a Ryan Field takeover by opposing fans, but it's not the only one. Michigan, Iowa and Ohio State have shown up in Evanston in similar droves in recent years, and the TV cameras face the "away" section of the stands, so Ryan Field looks even less purple on TV than it really is. The Nebraska game is a good case study of what went wrong with NU's ticket policy, and how the athletic department can change things to make the stadium more purple against Ohio State.

NU already has a few, non-ticket policy factors going in its favor. First off, the Ohio State game is Homecoming this year, which should bring more alumni to town than a regular home games — even one of this magnitude — would have. Secondly, the Wildcats have more preseason hype than they've had in any season since 1996, so there should be a high demand for tickets for all games, especially this one.

But still, even with those factors in play, NU would have struggled to achieve a good purple-to-red ratio had it kept last year's season ticket policy. This year, the Wildcats are changing things up to avoid a similar attendance embarrassment.

As Lake the Posts wrote, in the past, Northwestern season ticket holders have received perks not available at other schools. The biggest perk is that season tickets holders could buy as many additional single game tickets as they wanted before those tickets went on sale to the general public. However, that perk backfired on NU for last year's Nebraska game. NU season ticket holders recognized the large demand for that game from Nebraska fans, so they gobbled up tickets and sold the game out before tickets went on sale to the general public. Subsequently, they sold their tickets to Nebraska fans on the secondary market. The plan did backfire on season ticket holders a little bit — so many tickets were on the secondary market that they were going for dirt cheap just before game day. However, Nebraska fans ate up a majority of them, thus creating an atmosphere where quarterback Kain Colter had to go to a silent count in his own stadium.

Had NU kept the same ticket policy this year, it's likely that Ohio State fans would have done something similar on October 5. However, in an effort to keep its showcase game purple, the NU athletic department changed things up. Assistant Athletic Director of Athletic Communications Paul Kennedy outlined the new policy:

- Season ticket holders are able to purchase a limited number of additional tickets to games designated as "premium marquee" contests. Those games this year are Michigan and Ohio State.

- This is the first time we have imposed a limit.

- The number of additional tickets that STH's will be able to secure will depend on how many season tickets they have.

- 1 season ticket – Up to 2 additional tickets

Of course, the only way this will make any difference is if NU fans buy more season tickets than they have in the past. If they don't, then Ohio State fans will have the ability to buy more single game tickets when they go on sale to the general public, which would create an environment similar to last year's. However, given the increased excitement surrounding the program, there should be more demand for season tickets than there has been in reason seasons.

Filling Ryan Field with purple will always be a problem, and there figures to be a lot of red in the stadium on October 5. However, the NU athletic department is doing just about everything it can to make sure it's still a clear home-field advantage for the Wildcats. They've pulled out all the stops, but now it's in the hands of the fans, who are the only ones who can truly make a difference.