Northwestern's non-conference basketball schedule was supposed to feature Butler, but doesn't, and features road games at Stanford, UIC and NC State, as well as a home game against Illinois State.

Northwestern released its non-conference basketball schedule Tuesday -- they had planned to do it last week, but it got overshadowed by the 2014 football schedule -- and now we can take a look at it. It's done in video form, which is neat, and also we get to hear the coaches talk about the games individually. WHAT Y'ALL THINK ABOUT MISSISSIPPI VALLEY STATE, SON?

To summarize: Northwestern adds Illinois State from what we already knew, which is nice, but Butler, who was supposed to play Northwestern at Butler to finish off the home-and-home series they were supposedly playing, appears to be off the schedule. That's an RPI bummer: Butler has the potential to be a top-25 team this year, and it would've been a nice opportunity, if an unlikely win. (Update: The Indy Star wrote about Butler-Northwestern being a thing as recently as May 10, but this game has apparently been delayed a year:

Per #Northwestern: The Butler series was pushed back a year. NU will travel there in 2014.

I don't have a huge problem with that - you keep the game on the schedule, and this year's is tough and road-heavy as is.)

As for the other games we didn't know about: not much to speak of. We'll have to wait until next year to know how good each team actually is, but for now, they look pretty middle-tier, which is sort of what you want. The only one that could be super-hurtful is Mississippi Valley State, which we always talk about, but they actually helped a few years ago, so who knows.

Not the prettiest one as the home opener. Northwestern played the Panthers in basketball two years ago, and won comfortably. PREPARE FOR CHRIS COLLINS' WRATH, EIU.

Not a bad tough start, huh? This is finishing up a home-and-home, will help the RPI win or lose, and could be a great early win.

An analysis of NU's schedule when it was only kinda out 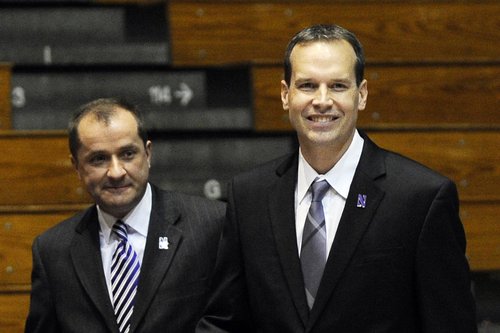 Illinois State was supposed to be a marquee non-con opponent when Northwestern beat them last year in South Padre Island to win a tournament. They turned out to be middling, but you can't go wrong with a solid in-state club from a solid mid-major conference in the MVC.

REVENNGGGEEEEEEEEE. Hopefully they fare a bit better in the Horizon League this year.

We already wrote about this, dunny!

Also wrote about it already, dunny!

Seriously: how the hell are these guys ALWAYS on Northwestern's schedule? It panned out two years ago when they made the tourney and it wasn't such an RPI anchor, this past year they went 5-23 in the nation's worst conference.

A pretty meh game against any Ivy League squad, another team we're playing for the second straight season.

Already wrote about this, too!