"Speed Does Kill" and Northwestern is in Derek Kief's Top Five

Share All sharing options for: "Speed Does Kill" and Northwestern is in Derek Kief's Top Five

Northwestern's recent recruiting surge has been well-documented, and while a number of top recruiting sites have the Wildcats in their top 15 nationally for the class of 2014, there could be more good news coming for NU.

The Wildcats were already in the top five for four-star defensive end/tight end Garrett Dickerson, joining an impressive list that includes Alabama, Ohio State, Michigan and Stanford. NU is also highly regarded by four-star corner Parrker Westphal, who has offers from Florida, Michigan, Ohio State, Notre Dame and others.

Today, the Wildcats joined the top five of four-star wide receiver Derek Kief, along with Alabama, Notre Dame, Ohio State and Kentucky. NU was in his original top five, but after he picked up a number of good offers, he decided to reevaluate. Despite the influx of good offers, the Wildcats made the cut once again.

We usually don't write articles about NU joining a player's top five — follow us on Twitter if you want to find that stuff out — but Kief's creativity makes for a fun little post. Kief has an entire website — derekkief.com — dedicated to his recruitment, where you can find highlights, stats, links, quotes, offers, "the legacy," and basically anything else you could ever want to know. So instead of just tweeting out his top five, he announced it with a photo, declaring that his "speed does kill." 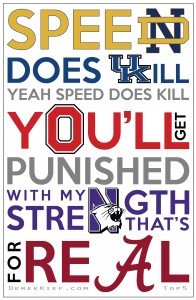 A high-res image is available here. Recruits have announced their commitments in plenty of creative ways. There have been double hat tricks, bulldog puppies, and more — as an aside, recruits seem to commit to Georgia in the best ways. However, this may be the most creative way a recruit has ever announced a top five. These schools are listed in no particular order, and it will likely be awhile until Kief decides. But if his speed does "kill," you've gotta like Alabama and Kentucky's chances, right? (Kidding, kidding).