Northwestern lacrosse has LASER FOCUS, a sixth ALC Tournament championship in an event that's only seven years old, and are the No. 2 team in the country heading into a chance for an eighth NCAA title in nine years.

Good Northwestern lacrosse happenings, y'all: a few weeks after losing 22-4 to Florida, the Wildcats avenged their rough 18-goal defeat with a win in the ALC Tournament final - their sixth in a tournament that's only happened seven times - picked up some hardware, and earned the No. 2 seed in the NCAA Tournament.

As for the game against Florida: losing 22-4 signaled a supposed changing of the guard in women's lax, because, hey, the team that was just started a few years ago blew out the team that's won seven titles in eight years. As normally happens when somebody slights Kelly Amonte Hiller, though, she got super-angry, recharged her powers, and made sure it wouldn't happen again. Three is a lot less goals than 22. NU won 10 of 13 draw controls and outshot Florida 24-9, controlling possession. Alyssa Leonard said this in the NUsports.com recap:

"We were fired up to play today but it was a different kind of hyped up, it was more of a laser focus before the game and you could see it in everybody's eyes when you looked around," said junior Alyssa Leonard, who today set the Northwestern single-season record for draw controls as she hauled in seven to bring her 2013 total to 112. "What happened in the regular season was humbling, but today we were all ready to play and we weren't going to let what happened last time affect this game."

LASER FOCUS. Six Florida players had to be carted off the field with searing laser injuries. It's unknown whether Northwestern's ability to shoot lasers out of their eyes will carry on towards the NCAA Tournament or whether it was a cheat code accomplished by pressing the right combination of buttons during the load screen. (Also, it seems impressive that Leonard set the single-season record in draw controls, considering there's a whole NCAA Tournament left to be played.)

And that brings us to the NCAA Tournament. Do you know what a 26-team bracket looks like? 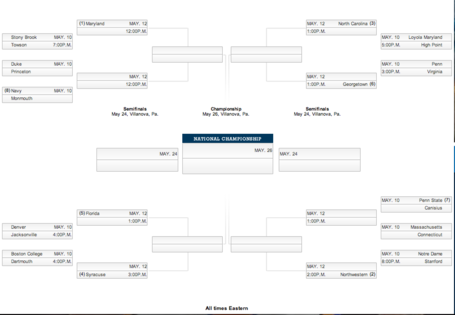 A lil bit unwieldy, huh? So here's the breakdown:

- The No. 2 seed seems pretty fair. Maryland is undefeated, and luckily for Northwestern, they're all the way on the other side of the bracket. Northwestern is No. 2 in five of six categories listed on laxpower.com's rankings page - strength of schedule, RPI, quality wins, and tournament selection index - so, No. 2 it is.

- Just because Maryland wouldn't be in play before the championship game doesn't mean NU's road is clear. Their probable second-round opponent is Penn State - who just pushed them to overtime - and their potential Final Four opponent is North Carolina - who beat the Wildcats in Chapel Hill. NU will also avoid Florida til the finals, which is nice.

- It looks like the tourney wraps up May 26, which means for the first time I can recall, the Northwestern women's lacrosse team gets to go to Dillo Day. Hopefully I see somebody lugging a national championship trophy from backyard to backyard.