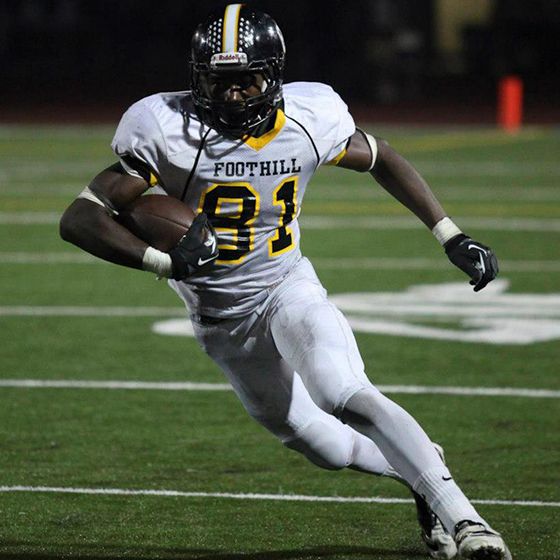 Maybe Northwestern would have never discovered Bobby Okereke. Maybe it would have watched a talented multi-position prospect with a 4.47 GPA and a specific interest in attending a reputable business school school slip through the cracks. Okereke’s father prevented that possibility.

He knew the Wildcats’ academic reputation and rising football program was a combination Bobby might consider in his college search, but he might not have expected the simple NU football recruiting questionnaire – available on NU’s official athletic department website – to lead to a prompt response, high school visits from two Wildcats coaches (defensive backs coach Jerry Brown and defensive line coach Marty Long) and a scholarship offer from Pat Fitzgerald.

None of the recruiting questionnaires Okereke’s father sent to various other schools elicited a serious response.

“Northwestern was the only one that answered,” Okereke said Sunday. Northwestern’s academics were the initial point of attraction for Okereke, but his interest grew after speaking with Fitzgerald and hearing the coach’s compelling but totally believable pitch for near-term Big Ten championship contention.

“Whether I go there or not, Northwestern’s going to win games,” he said. “So if I could go there and win a [conference] championship contention, that would be amazing.”

The Wildcats’ class currently consists of 11 players. According to Okereke, Fitzgerald is looking to wrap up his 2014 recruiting efforts with 15 recruits. At least one of those spots should go to a defensive end, and Okereke – who is also being recruited as a linebacker and tight end at other schools – embraces the idea of rushing the passer in college.

Position choice will not guide his ultimate decision. Okereke just wants to get on the field. “Wherever will allow me to play the most, the fastest,” he said.

The biggest determinant in his recruiting process, if it wasn’t already plainly obvious, is academics. At Northwestern, Okereke would have access to the Kellogg School of Management, which ranked 4th nationally among business schools according to the latest accounting by U.S. News. That, and the possibility of seeking out employment in nearby Chicago, all go into what makes Northwestern an extremely appealing proposition at this stage of his recruitment.

“It would definitely be nice to get a cushy job in Chicago,” he said.

His offer list as currently constructed consists mostly of Ivy League and Pac 12 schools, with Vanderbilt, Boise State and the Wildcats standing as notable outliers. Okereke plans to chop down his list of potential destinations as soon as he gets out of school sometime around the end of the month.

By then, Okereke believes, he should have a list of top five schools, and a better sense of where Northwestern fits in his list prospective landing spots.

“I’m going to sit down around June 20 to discuss everything,” he said. “That’s when I get out of school.”

There has been no pressure from Northwestern coaches on Okereke to speed up his decisionmaking process, although he does understand the window of opportunity, with just four scholarships available, could close if he doesn’t act quickly. He said he would like to visit Northwestern this summer, but made no promises about putting the Wildcats in his redacted list.

Over the next couple weeks, Okereke will drill down on the four or five schools that best meet his academic and football demands for an ideal college experience. Northwestern has the academics covered. The football side is a rapidly improving product with an upward trajectory and arguably more offseason momentum than any other program in the Big Ten.

If Okereke includes the Wildcats in his refined list of schools, it won’t be hard to understand why.

(Update: As pointed out by commenter algoncat, Okereke picked up Oregon and USC offers Monday.)