Share All sharing options for: Northwestern's Recruitment of 2014 S Adam Soesman Is Complicated 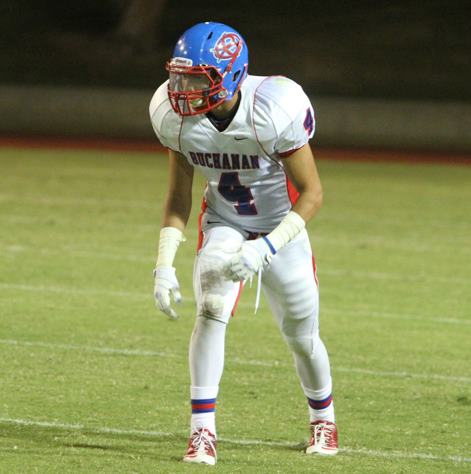 A scholarship offer could be on the way for Soesman (Photo credit: Adam Soesman).

Sometimes scholarship offers boil down to more than just coaches’ interest in a particular player’s football gifts. There are complex scholarship permutations and time contingencies and uncompromising class limits underlying it all, and 2014 safety Adam Soesman is quickly learning every irksome detail.

A verbal commitment from a defensive lineman Northwestern “wasn’t expecting,” combined with the potential commitment of an unnamed defensive back visiting in June has obscured the simplicity of a program recruiting a talented safety from Clovis, California. Soesman would have had a scholarship offer by now, he believes, if not for these complicating developments.

The unspoken understanding is that if Northwestern secures a commitment from, let’s call him “defensive back X”, sometime in June, Soesman will not receive an offer.

“That’s the way I see it,” Soesman said Saturday.

(Parse Soesman’s comments how you will. My interpretation: defensive back X is Corona (CA) S Ron Robinson; the defensive tackle is Fred Wyatt.)

Since last hearing from defensive backs coach Jerry Brown, Soesman left with the impression he would be hearing notice on whether Northwestern can offer him a scholarship anytime in the next couple weeks (days, even). If it does, the Wildcats would immediately enter the picture as one of Soesman’s top-three schools, right up with Oregon State and Arizona State.

“They definitely would be in my top three,” he said.

His number one school, if forced to make a choice on the spot, is OSU, but he allowed that distinction could change if the Wildcats extend an offer and reserve the requisite scholarship leeway long enough for Soesman to make a visit to Evanston -- official in nature and tentatively planned for sometime during his senior season.

“I’d be excited to get out there for sure,” he said.

There is no resistance to the idea of leaving the West Coast, the geographic region bounding four of his seven current offers; Soesman simply wants to attend the “best” program. Soesman’s evaluation of Northwestern’s recruiting appeal focused on two mostly predictable concepts: 1) academics and 2) a program “on the rise.” The incoming facilities facelift is another feature of Northwestern’s recruiting pitch that Soesman finds particularly appealing.

“Academics is definitely a big draw for me,” he said. “They seem to be doing all the right things to become a real contender.”

The uncertainty of recruiting developments completely out of his control has reduced Soesman’s comments about Northwestern to hypotheticals and possibilities and cautious optimism. He would like to receive a scholarship offer from the Wildcats, and were his recruitment an earlier component of Northwestern’s 2014 plans – had he begun talking with Brown before their initial contact two months ago – Soesman might already have an offer in tow.

Recruiting isn’t a symbiotically simple, transactive process, a coach casually agreeing to lay forth a fraction of finite scholarship space. There are other variables that must be taken into account, among them position needs, targeted class size, unexpected commitments and other already-extended offers. If Soesman and Northwestern can plow through the outside noise, the former would have to give the Wildcats serious consideration as he looks to consolidate his college search.

Or the opportunity may never materialize.

Soon Soesman will hear back from Northwestern coaches. A commitment from DB “X” would cool Northwestern’s pursuit of Soesman considerably, he believes. An offer would give him a rising Big Ten program with a specific want for 2014 DB depth to deeply consider in his college search.