Most major college sports coaches’ twitter accounts do a lot of the same things. They offer sporadic encouragement for daily activities with clichés and jaded platitudes. They tell you to “make the most of your day” and “seize the moment” and offer plenty of other boilerplate motivational quips that, coming from anyone other than your favorite head basketball coach, might otherwise feel trite and annoying. They craft tidy, easily-retweeted, prideful semi-war cries for their respective fan bases. And yet some coaches, for various reasons, know how to connect with their supporters through social media better than others. This is a simple dynamic to understand.

A top-10 list ranking coaches of BCS conferences teams by their Twitter following, assembled Monday by John Templeton at New York hoops blog Big Apple Buckets, offers a convenient snapshot of college basketball’s most Twitter-savvy coaches. To the surprise of pretty much nobody, Kentucky’s John Calipari finished on top with 1.24 million followers, more than the combined number of the 58 other BCS coaches. Some of the other usual suspects rank right about where you’d expect – Tom Crean (119,732), Billy Donovan (93,131) and Bill Self (75,583), come in at Nos. two, three and four, respectively.

There’s a curious face at No. 10. He has zero head coaching experience at the college level, yet he already has more followers than the wildly popular football coach he shares a campus (and Twitter-tethered fan base) with. That’s right: new Northwestern coach Chris Collins, with 24, 040 followers, is officially in the upper echelon of college hoops coach Twitter popularity. Here’s the full list: 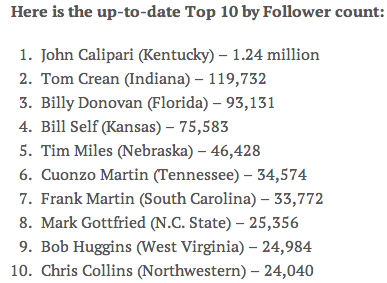 The large follow count you see next to Collins’ name is deceiving, if you view it merely as a product of his newest job position. Collins just spent the past 13 years at the hip of arguably the greatest college basketball coach of all time (and one of the greatest hoops coaches ever, full stop), and if you read the entirety of Templeton’s post, you’ll notice said legendary coach, Mike Krzyzewski, doesn’t maintain a Twitter account himself. Which is sort of lame, because we’d all love to read what the hivemind of Duke and Team USA’s K-presided success has to say in 140-character microblogs.

But it also allowed Duke fans to latch onto the next best thing – which in the case of Coach K’s coaching staff, meant Collins racked up thousands of followers from the Blue Devils’ rabid fan base almost by osmosis. Northwestern fans added to his count, and Collins’ total will continue to surge over the years, particularly if he brings Wildcats fans the Tournament birth they’ve painfully yearned for so long.

So if you haven’t already, give @coach_collins a follow, and while you’re at it, click on over to assistant coach Patrick Baldwin (@nubaldwin23). You won’t be disappointed.