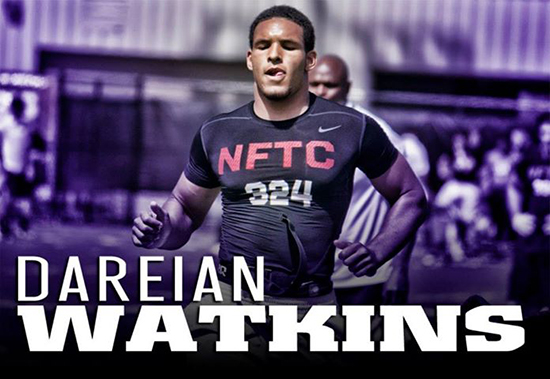 In a one-day camp packed with the region's best talent, Watkins wasn't swallowed up by his surroundings; he distinguished himself with a strong showing at the NFTC (Photo Credit: Dareian Watkins).

Some of the Midwest’s best recruiting talents convened Sunday in Columbus, Ohio for one of the most high-profile recruiting events of the year. The Nike Football Training Camp event pitted the region’s best high school players in individual and small-group drills, including rigorous speed and conditioning work, cone drills and one-on-one heats.

The level of competition was fierce, players verbally committed and not were out to project their skills in a positive light and the overall competition level was some of the best 2014 Northwestern commitment Dareian Watkins – one of two 2014 Wildcats commits invited, along with Clayton Thorson, who competed in the prestigious Nike Elite 11 – has ever experienced.

He didn’t feel outmatched or out of place or even comparatively overshadowed in any way. Watkins was in his element.

“It just felt great to be there, knowing I was being recognized as one of the top recruits in the country,” he said Tuesday. “I was honored to be able to showcase my skills against some of the best. I felt like I performed well”

A light warmup consisting of stretching and light aerobic work, excercises Watkins is still recovering from – “My body is still taxed,” he said – led into intense sprinting and agility work. Watkins, who is listed as an athlete on recruiting sites but played everything from receiver to quarterback to defensive back to running back at Galion High School (Ohio), worked with the wideouts, and after weathering an ankle injury early in the day, proved exactly why Northwestern was so dogged in its pursuit of a player the Galion Inquirer called “the most sought after athlete in Galion High School history." A long and thoroughly chronicled process ended May 6, when Wakins chose the Wildcats over more than 15 other BCS conference schools, including Illinois, Michigan State, West Virginia, Wisconsin and Penn State.

At first, Watkins couldn’t hide his disappointment. In three-on-three workouts, paired with Elite 11 MVP and top-five pocket-passer QB Drew Barker, Watkins only had one pass thrown his way. It was well-covered, and the session ended with without Watkins getting a fair chance to show off his great hands and elite athleticism – an unfairly shunned but highly talented player disadvantaged more by his surroundings than his own individual performance. He was discouraged, but motivated to make amends in subsequent drills.

“It was pretty frustrating,” he said.

In one-on-one drills, Watkins said his performance improved greatly, even as he labored to shake off a balky angle. Scout Midwest recruiting analyst Allen Trieu was in Columbus Sunday and doesn’t recall Watkins dropping a single pass. Watkins himself was also pleased with how he performed in the throes of man-to-man DB-WR showdowns.

“I definitely thought I showed better in the one-on-ones,” he said. “I was able to show what I can do.”

His one regret? Not being able to match up with Damon Webb, the No. 6 ranked cornerback in the country and one of the lynchpins of Ohio State’s still-building 2014 class. “I would have like to have gone up against Webb,” he said.

The upshot for Watkins, aside from the increased regional and national exposure, the opportunity to compete with some of the nation’s best prospects, was meeting fellow Wildcats commit Clayton Thorson and his family. Watkins connected with Thorson, the No. 7 pocket passer in 2014 according to Rivals, who was fighting off a shoulder injury throughout the weekend.

The drive from Galion, Ohio, to Northwestern ranges between six and seven hours, according to Watkins, but if he ever wants to leave campus for a weekend, he now has the option of taking the short trip to Thorson’s nearby Wheaton, Illinois, residence for a home-cooked meal.

“His family was really nice, really comforting,” he said. “It’s always nice to be able to have a somewhere to go if you want to get away for a little bit, and they said they would be happy to have me on weekends.”

Pressurized environments like these, with inordinate amounts of media coverage and undue scrutiny, can unravel a player’s confidence. Some guys can’t handle the heat, wilt under the competitive burden of a scout and coach-strewn field packed with the nation’s best prospects.

Nothing about the NFTC felt overwhelming or unnatural in the least for Watkins. Shoved under his first bright recruiting spotlight since giving his verbal commitment to the Wildcats a month ago, Watkins did what a class-anchoring four-star receiver should do. He represented his program, and more importantly himself, with poise and confidence.