Breaking Down the Wildcats: Zone Blocking

Share All sharing options for: Breaking Down the Wildcats: Zone Blocking

Far too often, writers and announcers use football terms without actually explaining what they are. We're guilty of that too, and that can leave readers/viewers confused, so we're hoping to do something about it. It's important for fans to be as educated about their favorite teams as possible, so throughout the summer, we'll release articles highlighting different terms and  plays that Northwestern fans have become accustomed to hearing about, but may not understand. Our goal is to make sure we explain all the different kinds of plays and terms that we describe in our articles. We don't claim to be football coaches here, so we won't attempt to explain things we aren't very knowledgeable about — this won't be a comprehensive guide to football — but hopefully we can give you a good idea of how Northwestern's offense operates, starting with the nuts and bolts. Today, we'll take a look a zone blocking, a technique that is important in multiple phases of the offense, but has been particularly important in NU's development with the zone read.

We've brought up zone blocking a lot in the past few months, particularly when referencing how recruits will fit into Northwestern's system once they get on campus — NU recruits athletic linemen because they fit the scheme the best. Zone blocking can be used in a number of different run situations — see Smart Football for an explanation of inside and outside zone runs — but it has been particularly important in helping the Wildcats establish their attack with the zone read. We'll explain the zone read more in-depth in a later piece, but first it's important to realize the pieces that help it work.

So here's the nuts and bolts version of zone blocking: Offensive linemen with a defender lined up in front of them will block that defender, while linemen who don't have a defender in front of them will help out with a defensive linemen before shifting up to block a linebacker in their "zone." We'll lay it out visually below, first with some (admittedly bad quality) Northwestern tape, then with some  YouTube clips from other teams that offer a little bit better quality.

Setting up the Play

Zone blocking can be used in any formation and it's used for many different plays, as we've already explained, but here we're going to show what happens on a zone read play. Mississippi State is lined up in a 4-3 formation, while Northwestern has two running backs lined up here on each side of Kain Colter. Venric Mark, the running back to Colter's left, will take the handoff, while Mike Trumpy, the running back to Colter's left, will run behind him and become Colter's lead blocker in case Colter decides to keep the ball on the read. The "playside" in this play is to the left, so we're going to focus on center Brandon Vitabile (66), left guard Brian Mulroe (72) and left tackle Pat Ward (70). 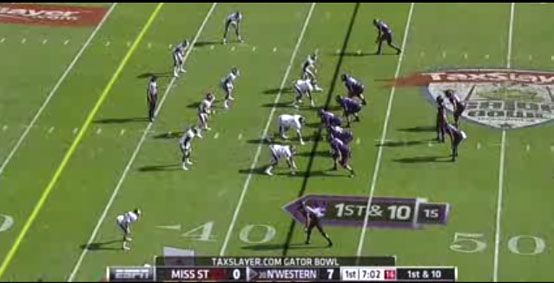 This is the "read" part of the zone read. We'll explain this in more detail in our zone read post, but basically, Colter is going to read the backside defensive end. As explained by Chris Brown of Smart Football, that read "blocks" the backside defensive end. If the end stays put, that takes him out of the play, and Colter will hand off to Mark. If he crashes toward Mark, Colter will keep the ball and have room to run on the outside. 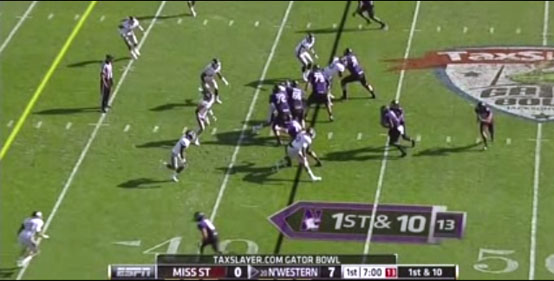 In this instance, the end stays put, meaning Colter will hand the ball off to Mark. But what we want to note here is the blocking. Since the defensive end has been "blocked" by the read, Ward is shifting up to block the linebacker. Mulroe is currently helping Vitabile block the defensive tackle, but will shift up to block a linebacker, as well. The third linebacker can't see the read, so he will be responsible for defending Colter if Colter decides to keep the ball on the read. Trumpy will be responsible for blocking that linebacker.

This isn't the greatest example (we'll have better screenshots below) because 1) the quality is bad and 2) it didn't work that well. Mark (circled) ran into Ward here, so NU only gained a couple yards. However, you can see how the blocking worked and how the play had the potential to go for a lot more yards. As you can see, Ward shifted up to cover a linebacker, as did Mulroe. Since the read defender had stopped and waited, he was behind Mark and couldn't catch him from behind. The other outside linebacker had committed to covering Colter and was in no position to catch Mark. So had the hole been a bit bigger (and Ward's block a bit better), this would have gone for a much bigger gain. 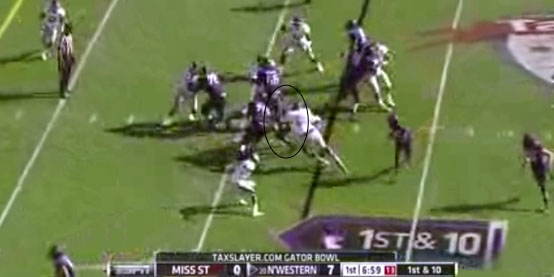 Those examples weren't as clear as they could be, so we found some better ones online. Here we have Nevada lined up in the pistol. As you can see, the read defender has stayed put, meaning the quarterback will hand the ball off on his read. However, note the right tackle, who is circled. He has come off the defensive end, like Ward did, and is now focused on the outside linebacker. 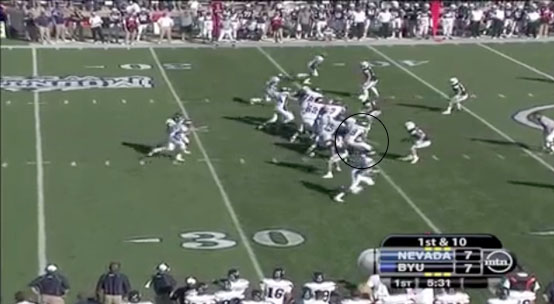 It's illustrated even better below. You can see that the right tackle has the linebacker firmly covered, leaving a big hole for the running back between the guard and tackle. 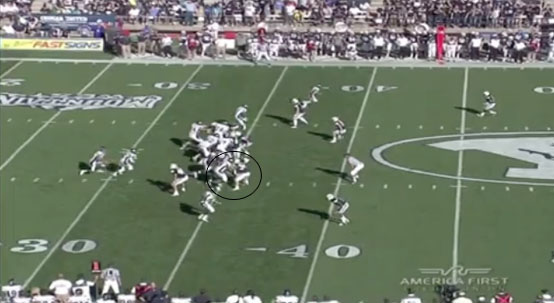 As we said, we aren't the authorities on zone blocking or any of the terms/plays we're trying to explain. We're simply trying to give you a general understanding of what the concept is. However, if you'd like to learn more, we'd suggest visiting Chris Brown's Smart Football website, which will give you great X's and O's breakdowns of everything football.