Northwestern vs. Nebraska: B1G N-Alysis of NU vs. UNL

A comparison between the two most recognized brands in "N".

Share All sharing options for: Northwestern vs. Nebraska: B1G N-Alysis of NU vs. UNL

In college branding there are two institutions which feature the most prominent use of the letter "N".

As noted by a number of elite journalists, the arrival of Nebraska in 2011 meant that the B1G had effectively cornered this market. It was an N-triguing development, but it has received little coverage since that fateful merger. Many fans want to know how these two programs stack up in "N" performance. Is the N-cumbent Northwestern "N" superior? Or do we prefer the N-terloper "N" from Nebraska?

As this is an important issue, Sippin' on Purple set out to bring you this exclusive N-alysis of "N" related N-deavours in the N-CAA. Up first is the newcomer, Nebraska: 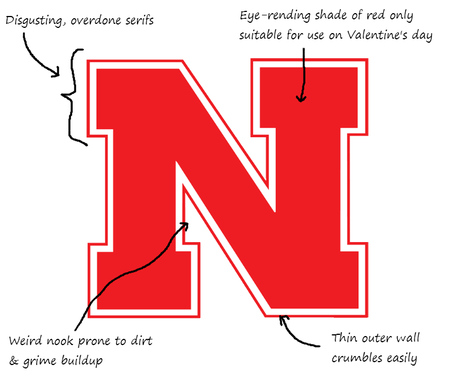 As we can see from the official report, Nebraska's "N" really sucks.

Ostentatious and excessive edges are all over this abomination, which weaken its structure and present a major hazard to children. The designer was clearly an amateur with no knowledge of practical "N" performance, and several major mistakes would hamper this "N" in the field. The color is unsettling, and really only has a use when heart shaped and enclosing chocolates, as without the sweet surprise inside it wouldn't be worth looking at this horrid fever red even for a second.

If my own child drew this "N" I would vomit and have it professionally destroyed. 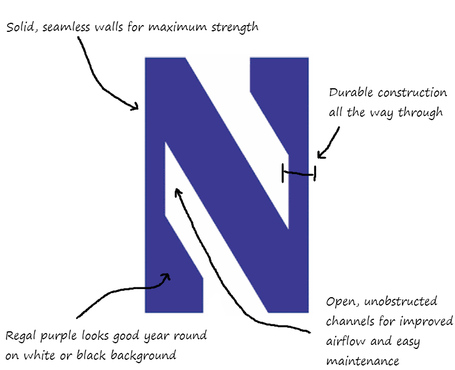 Initial reports on the Northwestern "N" are extremely promising.

We can see that this "N" is built on a solid foundation of sturdy walls with smartly angled buttresses. You can tell it's light and fast, but still has the strength to hold up to the wear and tear of a 14 game season. It looks great on white or black, and with a few modifications we've seen this "N" in white-on-purple and the stunning American-flag-on-purple configurations. This is truly the cutting edge of "N" theory and application. You could send this thing to the moon and back and it would sparkle like new.

I am currently changing my name to a string of 11 uninterrupted N's for use with this design.

I hope we all learned something today about the importance of careful scientific evaluation. Maybe you came into this article believing, on reputation alone, that either of these brands could deliver a satisfying "N". Maybe you already suspected that there was a massive difference in quality. In either case, you should now be able to make an N-formed decision about which "N" to use for your application.