The links are coming in fast and furious as we approach the season opener against Cal.

We'll lead off today's Sips with a Saturday programming note-- Fitz will be featured in a segment on ESPN's College GameDay, so be sure to set your DVRs or wake up early on Saturday to watch it air. Then take a nap, so you'll be ready for kickoff.

*COME TO FITZERLAND!! NU alums of a certain age can remember a time when home football student tailgates at the stadium were the rage. You had grilling, you had beer, you had fun. But then in the late '90s, someone in the admin felt that too much fun was being had and put an end to it all. WELL, NO MORE! If you're a student, and you're planning on going to a game, be sure to check out....wait, is that what they're really calling it?...uh, FITZERLAND!!! It's the brand new student tailgate, though it's open to everybody. Don't be grabby, though, the brats aren't necessarily fair game:

Anyone is welcome to come to Fitzerland! Although it is a student-only tailgate, it is still open to the public. It is up to the individual discretion of those in attendance if they share food or drinks with non-students.

Buzzkill! Seriously, though, this sounds like a great thing, and I'm glad the administration is bringing back the tailgates. Just wish they came up with a better name, cuz, I mean, come on, I don't think of Switzerland when I think of football. I'm not creative enough to come up with something clever (I'm only good for criticizing from the peanut gallery), so do your best in the comments section.

* TL; Read It Anyway: If you like your longform pieces, SB Nation's Bill Connelly's got a great one on the allure of college football Saturdays. It's the first chapter of his book, "Study Hall: College Football, Its Stats and Its Stories," and if it's all like the first chapter, then it'll be a great read. An excerpt of the excerpt:

This is a communal experience, a constant in life. You plan one-third of your calendar year around it. Everything else in your life may change; fall Saturdays aren't going anywhere. And hell, when the fall ends, bowls, recruiting, and spring football are right around the corner.

* Over at California Golden Blogs, which despite the name is a single blog, our counterparts have a scouting report on Northwestern. It's familiar stuff to us, but it's got screen shots and Xs and Os! Example: 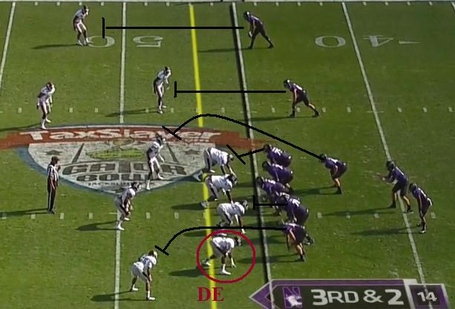 *So you like your Sips in audio form, eh? The San Francisco Chronicle did a podcast featuring the Trib's NU beat writer, Teddy Greenstein.

The Chronicle also has a nice feature about the last time NU and Cal met,in the 1949 Rose Bowl, WHICH WAS FILLED WITH CONTROVERSY!!!!!!

Even the Los Angeles papers, no friends of Cal, said the Bears were jobbed by the officials. In the ensuing years, Cal backers tried to persuade the Pacific Coast Conference and later the Pac-10 to put an asterisk beside the score in the record books. But as Waldorf said many times, "Yes, we've seen the pictures, and it's still official. End of story."

* Me wanty! You've seen Mountain Tiger's preview of all the B1G action this weekend here at SoP, now head over to Off Tackle Empire to read MNWildcat's take on the match-ups. Whatever you do, B1G, don't lose to a MAC team. Or an FCS team.

* Expectations, expectations: The Columbus Dispatch serves up its NU preview. Again, nothing you don't already know, like, for example, we're no longer losers.

If defeat is in Northwestern’s DNA, it no longer shows. Just ask coach Pat Fitzgerald about some pundits picking his team to finish fourth in the Big Ten’s six-team Legends Division.

* Follow the money: More for you degenerate gamblers, who probably know by now never ever bet on your team, whether for or against. Putting money on the line where your passion and pride already is, that's never a winning strategy.

A 9-3 or better record against this schedule would be a major accomplishment for a team that has good, but not great, talent and little depth. If injuries mount, this ticket could cash before November.

* And if you need more buzzkill: Here's a composite of all the preseason polls-- AP, USAToday, SI, ESPN, etc. You know how we're ranked 22nd in like every poll? Well, not every poll, because according to the composite, we're not even ranked in the top 25!!

* A new tradition for our friends from downstate: The Champaign Room has got the coverage on the Illini's new pre-game tradition-- fondling something called Red Grange's rock.

So, last year it was making the non-existent rivalry with Northwestern into a rivalry, and this year it's touching Red Grange Rock. And, well, considering how the game against Northwestern went last season I'm pretty sure all this means is that, before the season is over, at least one Illini player will be bludgeoned to death by Red Grange Rock.

* Roundball news: Turning away from football for a bit, we've got some men's basketball news, specifically the complete 2013-14 schedule. A breakdown of the slate from SoP basketball analyst MacArthur31:

At first glance--outside of the Vegas Invitational, I don't see the non-con as all that sexy-- though the local flavor is nice (Eastern, UIC, DePaul, Illinois State, IUPUI) which might increase the likelihood of getting more fans to check out games. Otherwise, we've got Gardner-Webb, Brown, MS Valley State. *shrug*

B1G looks like buzzsaw to start: Wisco, @Mich, @Iowa, Illinois, MSU, @Indiana. It's not good when I'm looking at hosting Illinois as the best shot at a win. Oof.

Given that we're starting a new regime which doesn't have all of the right personnel for it, and the conference looks very good (maybe not dominant), to make the postseason of any sort would be nothing short of a miracle. I'll be looking for the growth of Olah, crossing my fingers on Demps, and praying that Taphorn shows semblance of being useful.

* Women's hoops news, too! Joe McKeown's squad picked up a pretty strong recruit yesterday, 6'2" forward Maya Jonas, who chose NU over other B1G programs Michigan, Indiana and Wisconsin. This will be a key year for McKeown, who has brought some pretty highly touted recruiting classes to NU in the past few years, but whether due to injuries or transfers, has yet to achieve that elusive NCAA tournament berth.