Northwestern vs. Cal: What to look for as the Wildcats face the Golden Bears

Cal has a new, interesting, and likely effective offense with one majorly talented player who could give the Wildcats fits. They also have a defense that literally makes me laugh while writing about them.

Share All sharing options for: Northwestern vs. Cal: What to look for as the Wildcats face the Golden Bears

Game day is just two days away. Don't you think we should maybe take a look at the Cal football team, instead of just ragging on HAAKON, CROWN PRINCE OF NORWAY?

Well, I certainly do! Having talked to the Cal people, read Bill C.'s Cal profile which I've had sitting in the cover all week because it's so good -- you read Bill C.'s Cal profile, right? Did you also read the college football index, his pretty and well-done longform on why we love college football, Steven Godfrey's story on how to stop JaDeveon Clowney, Spencer Hall's IT'S FOOTBALL TIME brilliance, and wow, the company I work for has some people who are very, very, very good at writing things -- I'm now ready to tell you guys what to look for!

WHEN THEY GOT THE BALL

So, before you even read a word I write -- well, besides these words... and I guess the words in the last few paragraphs, look, you get what I'm trying to say -- two things to read. First: LTP's breakdown of the Bear Raid, by Jeff Schell. The Northwestern internet is so good these days! But that post has pictures and you should read it. Secondly, California Golden Blogs' post on the Bear Raid. Both ¡muy espectacular!

For starters, their starter at QB is Jared Goff, a true freshman. Yes, he's a talented one, a four-star recruit. And yes, he's been on campus since January, so he's not in his first month with the program. And yes, he's been noted for his consistency by all

Bigelow had four touches for 160 yards and two touchdowns, not against nobody, but against the best team in the Big Ten, and not in a blowout, but in a game that was tied after his second score -
observers. And yes, he has a host of talented receivers to toss to.

But he's still a true freshman QB, and one the gang at California Golden Blogs was kinda surprised to see given the starting gig. If there was ever a system for a true freshman QB, it might be Dykes' -- known for its simplicity, and not necessarily dependent on a strong-armed hyper-talent, just somebody who can make solid decisions and distribute accordingly -- but Goff will going to be asked to make solid decisions and distribute the ball accordingly in his very first game. That's a tough task for a kid who still probably gets lost on the way to class and doesn't fully understand his alcohol tolerance yet. (FRESHMAAAAAAAANNNNN!)

(Why couldn't he go by "Deuce" like so many other running backs? Great movie btw and if you disagree you're banned)

That's four touches for 160 yards and two touchdowns, not against nobody, but against the best team in the Big Ten, and not in a blowout, but in a game that was tied after his second score. It's mind-boggling that this kid was a third-stringer last season, but he'll be the starter this year, and he's a damn sparkplug.

As those posts note, Dykes' offense often runs out of a diamond set, and he ran the ball 52 percent of the time last year. Bigelow will be getting the ball, a lot, and sets that put defenses in uncomfortable situations.

On the one hand, this is good news for Northwestern. We're not as worried about our front seven as we are about our secondary, where it's Nick VanHoose, Ibraheim Campbell, and a prayer. The fear going into any game is probably what opposing teams can do against Daniel Jones, but with Goff in the mix, hopefully Jones can hold his own.

On the other hand, yo: watch out for Bigelow. Kid's an explosive player in a system that should play to his strengths. That's something to worry about.

The most intimidating thing for most teams will probably be the up-tempo nature of Cal's offense, but as Damien Proby said, NU plays against that all the time.

I think a key player for NU is Collin Ellis. He's fresh of winning his strong-side starting gig, and Cal will be running right at him. Fitz did say that NU would be using its linebacker depth against Cal due to the up-tempo thing, but I think Ellis is going to be tasked with bringing down Bigelow or shedding a block to reach him quite a few times, and his performance in his first start in a couple of years is essential.

If Daniel Jones and safety help from Traveon Henry and, in passing situations, Jimmy Hall, can't deal with Goff's arm, generally with only one receiver split to each side, we are in for a longer year than Cal.

I hope that scared you. You should be scared! Cal is an interesting team that does interesting things offensively, they have a real star, and although we're trashing Goff, we're also banking on his failure based on the fact that we've never seen him play. He could, mind you, play very well in his debut. I think even a Cal optimist has to give the edge to Northwestern, a strong defensive team facing a squad rolling with new marching orders for the first time, but there's the distinct potential for them to make NU look bad.

So, be scared of Cal's offense.

Now, prepare to be soothed. Northwestern is going to do bad things to Cal's defense. The Golden Bears finished 98th in scoring defense last year, and I'm maniacally giggling over here thinking about the vicious things Kain Colter, Venric Mark, and a cast of whoever else feels like showing up are going to do Saturday night. 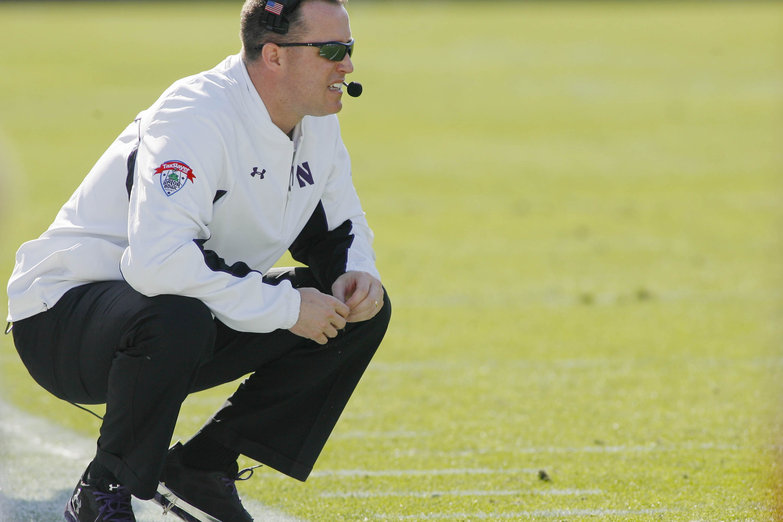 From actual analysis, to jokes about people's names.
They have a new defensive coordinator, Andy Buh. He's trying to shift from a 3-4 defense to a 4-3 defense, and although the fellas from Golden Blogs were quite optimistic about this, Bill C. is not. You're asking undersized dudes to play defensive end, you're asking defensive tackles who wouldn't normally be in the lineup to do things. BTW, Northwestern has two dynamic players who run the ball. If ever there was a team for Northwestern to face in their first game as an offensive line as they break in three newbies, it's a team trying a wholly new front.

And the passing defense! They were 107th in the country last year, WITH a pair of cornerbacks who got picked in the NFL Draft!

The one strength of the unit is LB, but middle linebacker Nick Forbes is doubtful for the game with a disc injury.

The thing Cal fans seem to be saying about the defense is that despite being bad last year and adapting personnel to a new system, they'll be able to meet stopgaps to survive defensively. I already find this doubtful. But they mitigate that optimism by pointing out that they have very little depth. The problem here is that Northwestern and Cal both run up-tempo offenses. As we mentioned, NU's defense will be up for it. If Cal's defenders get winded, NU can seize.

It's bloody brilliant that NU has great wide receiver depth. Even if you assume Cal's two new starting cornerbacks are capable of getting the job done, those around the team don't seem to think there are third and fourth options. I expect to see a lot of NU's typical four-wide, or three-wide-one-RB-and-Dan Vitale looks, which will make Cal bring in players that shouldn't be playing in the secondary. NU has the players to cycle in and out for fresh legs, Cal won't. And Mark and Colter should have field days against that new front look.