Northwestern vs. Cal 2013: Preview roundtable for No. 22 Wildcats-Golden Bears

IT'S THAT TIME, JERKS! We get to talk about No. 22 Northwestern vs. Cal, and say what we think is going to happen.

Share All sharing options for: Northwestern vs. Cal 2013: Preview roundtable for No. 22 Wildcats-Golden Bears

Guys! There's one day until Northwestern-Cal gameday! Maybe that game won't happen until just about 408 hours from now because the game's at ten friggin 30 p.m. Eastern, but whatever: we can talk about the game!

You know the drill: I asked all our writers what they think is gonna happen tomorrow. You get to say what you think is going to happen in the comments and in the poll!

I'll be honest: I cam einto this all expecting a romp. Over the offseason, thinking about Cal made me not at all scared. But over the past few weeks, especially reading what those guys at California Golden Blogs have to say (I'm easily swayed/convinced) has made things a little more interesting.

Let's see if anybody else is in the same boat.

I will take crappy pictures with the camera on my phone to give you the experience from the NU fan section. I do not anticipate seeing anyone reading a textbook, since this is an away game and classes aren't in session, but you never know.

EVERYTHING YOU NEED TO KNOW ABOUT NORTHWESTERN-CAL 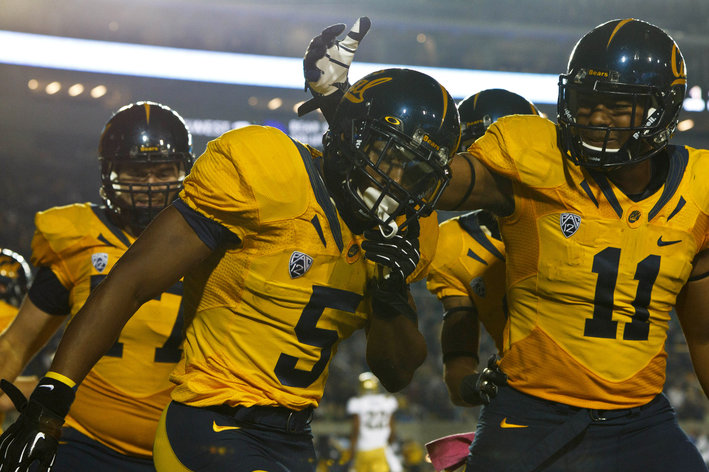 From a more in-depth preview of what Cal does on both sides of the ball to analysis of why you, Northwestern fan, should hate Cal to news to NAMES, all of Sippin' on Purple's coverage of NU-Cal.

There are two reasons to be nervous about this game: it is a west coast night game, and it is happening in week one. Still, Northwestern was the better team last year, Northwestern returns most of the important pieces of that team, Cal has a new coach, and Cal is starting a true freshman at quarterback. Northwestern should have no problem grabbing an early lead, and I expect the defense to come up with three or four sacks and a few turnovers to protect that lead.

I'm going 27-21, 'Cats over Bearsss. Our boys jump out to an early lead and then the defense holds on, with a last drive pick by Nick VanHoose.

I see this being a slugfest early. Cal's athleticism across the board will keep them in this game for a while, but in the end, Northwestern's experience and poise and comfort level with their offense wins the day. The Bear Raid offense will put up some points, though, and I wouldn't be surprised to see Cal rally late while down. Ultimately, though, NU's favored in the game for good reason, and the Wildcats will put the game away.

This is going to be a difficult opening game, both for Northwestern and for me. 10:30 PM is just way too late a kickoff for an old man like me. 5 years ago I'd be thrilled at how much pregaming time such a late kickoff would give me, and now I'm going to have to plan out an afternoon nap just to make it to halftime. Never get old, kids.

We're gonna have ourselves a shootout, gents.

Cal's offense legitimately scares me. Sonny Dykes is a good coach, and Brendan Bigelow is a damn fine running back. I also don't necessarily trust [NOT NICK VANHOOSE] in the secondary.

But Cal just isn't going to have an answer for Kain Colter and Venric Mark, and if Trevor Siemian wants to air it out, nobody's gonna stop him. They will do mean things to the Golden Bears on the ground.

Yes, there are a lot of tough factors in this game -- time, location, tempo -- but I feel Northwestern's gonna be prepared for it.

We're ranked for a reason. Let's show why.

SO WHO YA GOT