Northwestern's two-headed QB monster is great because both quarterbacks are skilled, but they each have their own unique talents. For example, Kain Colter is apparently good at making me absurdly hyped, but Trevor Siemian is a bad singer.

We know this thanks to two videos released by NUSports in the past two days. (I had planned on putting them in a larger Sips post, but for now let's just focus on them individually because they're both great.)

The first is of Kain Colter going around Chicago -- Chicago's Big Ten Team!!!!! -- and reading a bunch of stuff dramatically and making me want to run through a damn wall.

AHHHHHHH! I mean, Kain hasn't taken any acting classes at NU or anything, but, just casually walking around Chicago and talking about the Rose Bowl and saying stuff about playing football still gets the job done.

However, I do feel really bad for Kain Colter's horrible debilitating mental condition that causes him to be perma-trapped in an NUHighlights video. 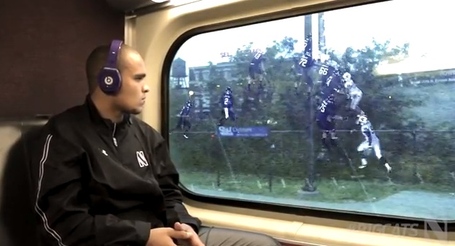 A) What's up with those purple Beats by Dre headphones? Are those standard issue?

B) We're Chicago's Big Ten team, and our athletes are taking THE METRA? Like, the El is right there. I took the Metra once in four years of college and I felt like I was so unnecessarily fancy. 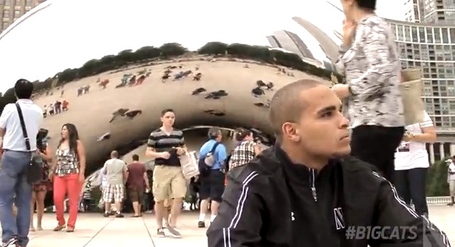 Oh, wow, a picture looking artsy in front of The Bean! You must be a lifelong Chicagoan! I remember freshman year too. Make sure that your selfie is your profile pic. 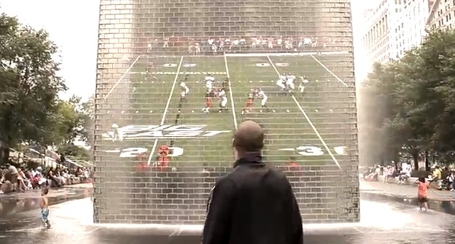 The No. 1 thing preventing Northwestern from being Chicago's Big Ten team: that baby on the left COMPLETELY IGNORING Northwestern vs. Syracuse highlights. That baby hates Northwestern.

And eventually he comes back to Ryan Field to make us all feel super-excited. 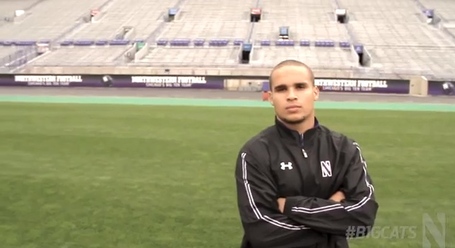 "Gameday's coming. First Saturday of the year. We've been working hard. We're ready. ARE YOU?!?!?!"

But perhaps the cooler video was mounting a helmet to Trevor Siemian's helmet. They did this with walk-on P.J. Carollo a few years ago, but they had more fun with it this time.

0:21: Everybody on the team sings along to the song "All Gold Everything" by Trinidad James, notably the "POPPED A MOLLY I'M SWEATIN/WOO!" part, for which Kain Colter has hand gestures. I mean, hey, if it's good enough for LeBron James' pregame warmup routine, it's good enough for Northwestern's, right?

But seriously: NORTHWESTERN WILDCATS FOOTBALL DOES NOT ENDORSE THE TAKING OF ECSTASY OR WHATEVER YOU KIDS CALL IT THESE DAYS.

0:56: Trevor Siemian serenades us with his version of "Wagon Wheel," the greatest song ever written. ROCK ME MAMA LIKE THE WIND AND THE RAIIIIIN ROCK ME MAMA LIKE A SOUTHBOUND TRAIN HEYYYYYYYYYYY MAMA ROCK ME anyway, this did quite a number on my timeline

Great singing Trevor, you're the next @DariusRucker RT @NUFBFamily: We put a helmet cam on Trevor Siemian http://t.co/OVWPjKLWwn #B1GCATS

I DON'T CARE ABOUT FOOTBALL FIRE HIM RIGHT NOW

IF I WAS BEING CHASED BY A GIANT SPACE MONSTER THAT I JUST SAW EAT SOMEBODY AND SOMEHOW WHILE RUNNING I SPOTTED A DIFFICULT TO NOTICE ENTRANCE TO A ROOM THE MONSTER WOULDN'T NOTICE AND DOVE IN, AND THEN I GOT INSIDE AND THEY WERE PLAYING THE DARIUS RUCKER VERSION OF WAGON WHEEL, I'D SPRINT RIGHT BACK OUT AND LET MYSELF BE EATEN BY THE GIANT SPACE MONSTER

It's okay I guess. Anyway, my point is, Quentin Davie is an amazing practice DJ:

1:08: I'm actually kind of curious what happens here -- is Kain blocking Trev? And why is NU practicing that?

1:28: college athletes are self-aware about how often they talk about grinding

As many jokes as we can make: THESE VIDEOS ARE SO AWESOME, and Northwestern sports deserves a million props for making them. Keep it up -- the @NUFBFamily Twitter is literally on must-follow status.

Northwestern football fall camp: Updates from the Wildcats as they prepare for 2013