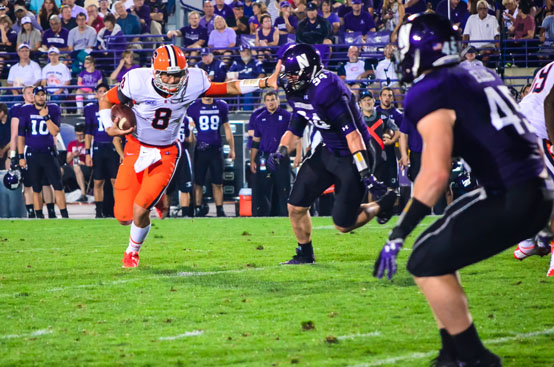 Completing sacks has been a point of emphasis for Northwestern's defensive ends in film study (Photo credit: Samson Fong/Insidenu)

Over the last two weeks, in games against Syracuse and Western Michigan, Northwestern’s defensive ends recorded just one sack combined. The problem was easy to diagnose from afar: the Wildcats were getting close, but not completing sacks, often times reaching the quarterback just before he released the ball.

As it turns out, that premise was correct. Sophomore Lowry, who has one sack so far this season, saw the very same issue while dissecting Northwestern’s game film Sunday.

“We need to finish better,” he said Monday at a press conference. “We did get a lot of pressure [Saturday], but the one thing we didn’t do was finish our sacks.”

A second issue, Lowry believes, is a poor effort on the defensive ends’ behalf to corral quarterbacks when they scrambled outside the pocket. Forcing the passer to leave his comfort zone is an important step, but not if he’s able to escape and turn upfield for positive yards, as was the case Saturday on several occasions with Broncos quarterback Van Tubbergen, who finished the game with 33 rushing yards, including one 17-yard run.

“We need to contain better, too,” Lowry said. “A lot of times we were getting pressure up the middle, and our ends didn’t contain as well as we could.”

One possible solution? The four-defensive end formation Northwestern often employs on passing downs, wherein Lowry and Scott line up as tackles, and Odenigbo and Gibson position themselves on the edge. Lowry (6-foot-6, 265 pounds) and Scott (6-foot-4, 265 pounds) are big enough to man the middle, Lowry says, while Odenigbo and Gibson are better speed rushers. Using this formation requires keen judgment; when Northwestern forces opposing offenses into long down-and-distance situations, or otherwise believes a pass is coming, it sometimes trots out four smaller but faster linemen, the aim being to load the line of scrimmage with as much speed and pass-rushing force as possible.

Lowry believes this is one of the defense’s more effective schemes.

“It gives our younger guys like Deonte and ifeadi a better chance to get more reps off the edge and affect the quarterback,” he said. “So I think that’s one of our strengths – that formation.”

One downside is the loss in size and sheer power at the point of attack that comes with substituting players like Sean McEvily and Chance Carter out of the game, which could leave Northwestern vulnerable against teams with strong power run games, such as Wisconsin.

More frequent use of that formation, along with better execution at the end of attempted sacks, should help reverse the declining sack trend Northwestern has been trying to correct over the last two weeks.

That's obvious. The hard part is using that knowledge to render measurable improvement.

“We started off strong the first week getting four sacks,” Lowry said. “But we definitely need to get more sacks and finish the play and affect the quarterback.”

A final audition of sorts awaits Saturday against Maine, before a two-week layoff precedes Northwestern’s Big Ten opener against Ohio State. The Wildcats need to get their pass-rushing miscues in order before then, or else.